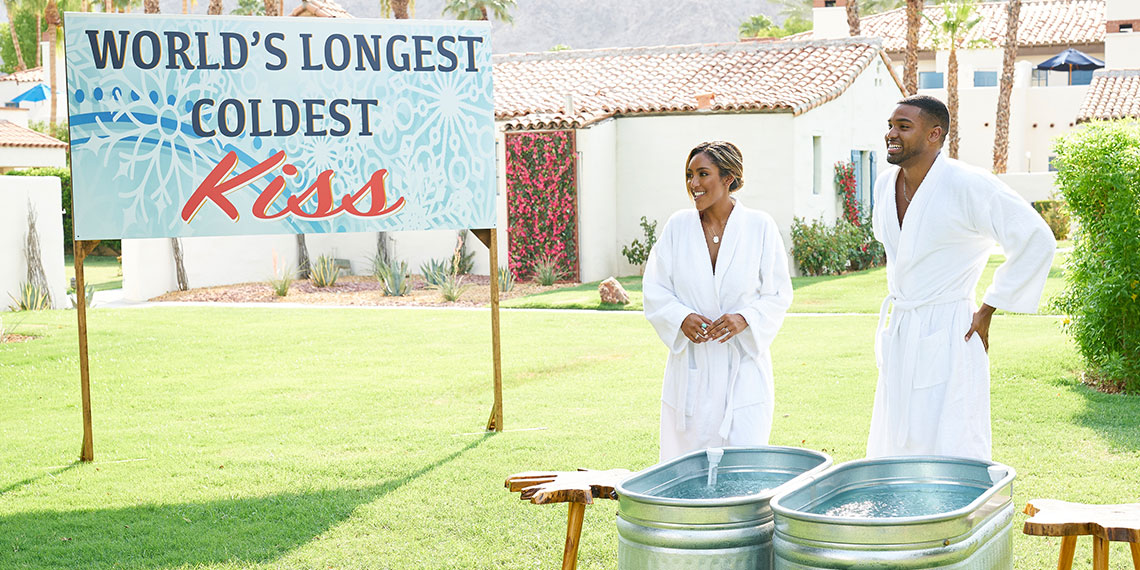 Well, everybody, we’ve made it to the final week of The Bachelorette. In keeping with the “unprecedented times”, ABC is breaking protocol and giving us fantasy suites and the finale in the same week. I’d like to think this is a gift to us for having to put up with Clare’s therapy sessions masquerading as dates, but we know better: they have to keep things moving in time for the premiere of Matt’s season. I’ll be filling in for my esteemed colleague Ryanne this week, so please be gentle in the comments. Let’s get to it!

We begin with Tayshia discussing the importance of the fantasy suite dates and her confidence in the final three. We then cut to Ivan, Brendan, and Zac being forced to sit together and allude to their potential future as eskimo brothers. It’s awkward AF and will be a running theme throughout the episode. Meanwhile, Tayshia has a “girl chat” with JoJo. They’re really trying to make JoJo happen, huh? Despite Ed’s notes, Chris Harrison continues his practice of barging in on the men without even a courtesy knock. This time he tells them that they better be prepared to get down on one knee and propose.

Chris: If you’re not ready for an engagement, GTFO!
Brendan:

And so begins Brendan’s mental spiral.

To my surprise, Ivan gets the first fantasy suite date. I personally love Ivan. He’s far and away my favorite of the three men, but he’s too pure for Tayshia and, arguably, this world. However, he tells us he did The Secret and manifested the first date. You go, Ivan! Zac is visibly pissed and Brendan looks like someone told him that it’s now a federal offense to wear turtlenecks. Zac reminds us that regardless of the men’s feelings about the other men, this is about Tayshia. Finally, a man who understands the concept of The Bachelorette!

Just watching the way that Tayshia interacts with Ivan, it’s clear that he’s not the frontrunner in her mind. As if the lukewarm peck she gave him weren’t proof enough, we find out that their date is a f*cking ice bath. Now if that’s not a metaphor for her feelings for Ivan, I don’t know what is. “Are you excited?” she asks, with that pseudo British inflection she adopts when asking questions. Ivan smiles through the pain. This is the most unromantic concept for a date that I can possibly think of, especially one that’s designed to precede sex. The shrinkage alone! Rude, Tayshia. Rude. Even Big Paulie, who according to Chris Harrison is a “Bachelor Nation favorite” (sure, Jan), deems the effects of this date on Ivan’s prospects later on “devastating”. Slapping a potential “world record” on this turd of a date isn’t fooling anyone, Tayshia! You may as well have had an intern spray paint a football field on some cardboard with “Friend Zone” at either end.

Meanwhile, back at the house:

Zac seems to be handling things a little better. He gets the second date card and gives us his best Matthew McConaughey.

During the evening portion of Ivan’s date, he tells Tayshia he’s falling in love with her. She says she’s been falling for him too, but I’m just not feeling the sparks between these two. Their conversation doesn’t have much substance and basically consists of them parroting things back to each other. “I cried in front of you!” “I cried in front of you!” Apparently this is enough to take things to the fantasy suite, which in this case is an Airstream trailer that inside looks like it was designed by 2009 me after winning an Urban Outfitters shopping spree. I love a boho-chic moment, but this is not the mood for fantasy suites. This looks like it would be better for a Real Housewives girls’ trip (OC, obv). Apparently it had the desired effect, though, because they stayed up all night talking, according to Ivan. I don’t get the feeling they had sex. Maybe a little over-the-pants action, but nothing more.

Ivan returns to the house and recaps the date. Unsurprisingly, Zac and Brendan look pissed. Brendan, clearly a masochist, asks if they got any sleep. Don’t ask questions you don’t want the answer to, Brendan! Ivan is apparently an emotional cutter as well because he asks what Zac’s date card said. Yikes.

The vibe on this date is completely different than the date with Ivan. Tayshia is straight-up giddy. The feeling is mutual for Zac and he tells us no less than 14 times that he can’t wait to EXPLORE Tayshia. Vom. That’s exactly what the guy you go on one Hinge date with tells you right before he never calls you again. Their date is body painting, which may as well be the polar (see what I did there) opposite of Ivan’s date. This date is essentially foreplay with colors. They slap on some paint and proceed to aggressively make out in front of the camera crew. Do they have no shame??

During the evening portion, they get into deeper topics, specifically, Zac’s stance on having kids. Zac says he realizes now that he does want to be a dad and he then proceeds to tell Tayshia that he loves her. The moment was really genuine, so much so that it moves Tayshia to tears and she says she loves him back. I can’t even be snarky, it was a lovely moment. This is what happens when you put age-appropriate men on this show!

They move on to the fantasy suite, and the set-up alone is another personal affront to Ivan. Zac and Tayshia get a whole-ass suite that looks much nicer than the “El Presidente” suite Tayshia’s been living in all season. The unmitigated gall of these producers to do Ivan so dirty!

Ivan watching this back:

The next morning, Tayshia and Zac are jumping on the bed like two toddlers hopped up on pixie sticks. Interestingly, Tayshia says in a confessional that Brendan has had her heart since day one. This should be interesting given Brendan’s sheer terror all episode. Zac returns to the house with a sh*t-eating grin on his face. Ivan remains mostly calm. Brendan looks…constipated.

Brendan tells us that he’s worried about the prospect of getting engaged again so quickly after getting divorced. Brendan clearly didn’t get the memo on not telling producers about your biggest fears, lest they be exploited to the high heavens, and so his fate is sealed. The date is hosted by F*CKING NEIL LANE! Neil, apparently pissed he had to cobble together a ring for Clare with barely 24 hours’ notice, negotiated some more airtime for his tacky wares and so we need to endure this product placement we’re calling a “date”. A date like this would be torture for just about any straight male who’s been dating a woman for a matter of weeks, but for Brendan, it is hell on earth, and it shows.

Neil keeps telling Brendan not to get nervous, then proceeds to talk endlessly about engagements and weddings. As if this wasn’t anxiety-producing enough, they then FORCE BRENDAN TO TRY ON WEDDING BANDS! I swear his hands were shaking. These producers are laying it on thick. They’ve even got Neil Lane waxing poetic about how rings are circular (no sh*t) and that marriage is FOREVER, as if Brendan, who has been married before, doesn’t already know this. Is Robert De Niro going to pop out and tell Brendan he’s been admitted into Tayshia’s circle of trust, too?

This date is messy AF. I guess this is one way to test his appetite for a proposal at the end.

The night portion of the date doesn’t get any better. Unfortunately, Tayshia saved her best dress for this date. Brendan is…wearing a black T-shirt. Not a good sign. Tayshia brings up Brendan’s distance and he admits he’s been struggling with the idea of an engagement. He confesses that he’s still broken. It was raw and honestly heartbreaking. Tayshia doesn’t put up a fight and sends him home. She says he’s the one she pictured herself with at the end. I’m sure whoever she chooses will be thrilled to watch that back.

We get a surprise appearance from Rachel, who looks stunning. As happy as I was to see Rachel again, I didn’t really understand why she was there. The conversation was pretty superficial at the beginning, until Rachel asks Tayshia about any regrets she might have. Then it became very clear why she was invited: to create an opening to talk about Ben, who is obviously going to pull a Bennett and come back to ask for another chance. To which I say:

The men are getting ready for the rose ceremony and Ivan’s look here was giving me major Drake vibes. I’m not mad about it. We then see a shot from the waist down of some bulging thighs in capri pants making their way up the path of the La Quinta, and it’s immediately clear that Ben has returned. He tells Chris Harrison that he shuts down when things are tough and he wants to resolve things with Tayshia.

Tayshia, meanwhile, has two roses left, and to symbolize this she has brought the girls out for the night. She looks gorgeous and is feeling good about her final two, so of course Ben has to swoop in and f*ck it all up! He knocks on Tayshia’s door and she looks THRILLED to see him. He confesses his love for her, admits that he blew it in the moment, and tells her he sees a life with her. Tayshia’s immediate response is to freak the f*ck out and run to her producer. Not a great sign, buddy! All I know is if she cuts Ivan for this clown I will continue to loyally watch this train wreck. See you tomorrow!