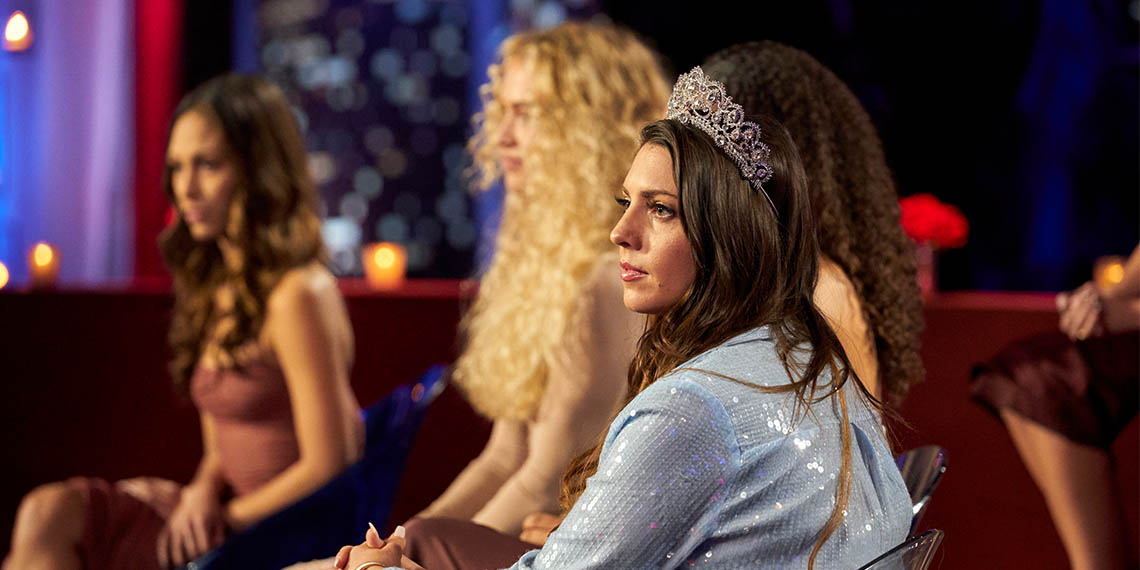 The Best Bachelor Recap You’ll Ever Read: The Women Tell Nothing

My my my, Bachelor Nation is crumbling right before our eyes, no? Between Rachael Kirkconnell’s racism scandal, Chris Harrison’s racism scandal, Taylor Nolan’s racism scandal, and Rachel Lindsay being bullied off Instagram because psychos are blaming her for other people’s racism scandals, I just can’t keep track anymore. Thankfully, I’m not here to talk about that today. I’m here to tackle what really matters: sex. Because tonight is fantasy suites, aka the episode where the microphone operators have to creep outside a bedroom until they hear a woman half-heartedly fake an orgasm. Make it quick for their sake, ladies!

Wait, what is that you tell me? They’ve switched up the order and tonight is The Women Tell All? I should have known that your regularly scheduled recapper Ryanne would only give up this week for one reason. Thanks pal! I’ll kill you later! Looks like I will be writing about 30 (almost) adult women screaming at each other about nothing for two hours. Shall we walk the plank together?

We jump right in, and the show makes a point of letting us know that this episode was pre-recorded before Chris’s disastrous interview with Rachel Lindsay. We get it, producers! Aside from the fact that you hired Chris, never once did a deep dive on any contestants’ social media before casting them, and barely included people of color until 2017, this is totally not your fault!!

Right off the bat, I feel like the women are sitting way too close to each other. It’s almost like ABC wants to wipe out this entire group of tattletales and bullies with a deadly virus. Hey, I hated this season too but you don’t have to kill them! Though I guess that might make ratings go up…

Chris starts out by reminding the women that he blindsided them with new arrivals weeks after the season had already begun: “One of the interesting things that happened this season: five new people arrived.” I love how he’s acting like these women just wandered out of the forest in tacky ball gowns, walked up to the Nemacolin, and knocked on the door because they just HAD to meet a man who’s addicted to turtlenecks and embarrassing TikTok dances.

Ryan tells Chris that she was offended when she arrived because she was called a hoe. Victoria was, of course, offended that Ryan was offended.

VICTORIA: “People made fun of my bra straps and I just laughed it off”
ALSO VICTORIA:

So this whole interaction was to get us to look at your bra, wasn’t it? I’ll admit I fell for it. And I don’t hate it.

Katie vs. The Girls

As it turns out, people hate a rat more than they hate a bully. Duh. Snitches get stitches. Ever heard of Fredo Corleone? Some of you didn’t grow up in an Italian-American family in New Jersey, and it shows. Pretty much all the women blamed Katie for creating the toxic situation in the house, because it got worse once she told Matt.

If you know, you know.

They also came at her for being the hardest on Sarah, and only saying that everyone should be nice to Sarah after finding out about her dad. Katie says to them, “It’s called learning, it’s called growing.” Wow, she’s already honed that standard Bachelor Nation non-apology. I dare them to find any old damning tweets of yours, girl! Did you go to any distasteful events recently? No worries! You know what you’ll say!

This is not the way I was expecting this to go. The internet loves Katie! But, the internet is not 25 women that Katie called a bully, circling her and baring their brand-new veneers at her menacingly. The better to eat you with, my dear!

Brittany In The Hot Seat

Chris Harrison calls up Brittany to the hot seat. He reminds us that she was called a “high-end escort”. TBH I think it’s nice of everyone to add high-end in there. Look, rumors aren’t cool, but at least Anna made her sound fancy in the process of being terrible. Brittany talks about her trauma from the rumor and Chris nods along solemnly as if he didn’t throw a suggestive wink every time he previewed the “most salacious accusation we’ve ever heard on this show.”

Anna apologizes, but does still claim she had heard that Brittany was entertaining men for money. This is a classic Real Housewives move, and I’m low-key impressed. Like, “I’m sorry I said your husband was cheating, but it’s not my fault that I heard your husband is cheating.” Anna also continues to claim that she got so many messages about Brittany because “Chicago’s a small town.” Anna! Chicago has nearly three million people in it! Just because you and your best friend once spotted someone you’re pretty sure was Michelle Obama getting out of a limo at The Bean does not make it a small town! And I can tell you it wasn’t her!

Even with all those caveats, Brittany accepts Anna’s apology. You’re a better woman than me, Brittany. Apologies are nice and all, but if I were her I’d make Anna pay to scrub those damaging Google results. Just an idea for you, Brit!

We are 35 minutes into this episode and they are already airing unseen footage. This does not bode well for the content of the rest of the episode. It seems that all the group dates that went straight to cocktail hour on the show were actually Fear Factor-esque. Touching bugs, stuffing their faces with food, wandering around the great outdoors—idk what the editors were doing this season, but I promise those episodes were not so jam-packed that we couldn’t have kept 30 seconds of Kit getting lost in the wilderness.

I swear the theme of all these dates was, “watch these girls vomit and then feel them up!!” Like, I get that you have limited options this year, but I feel like attempting to cause grievous bodily harm to the women every episode wasn’t totally necessary.

Katie In The Hot Seat

We, of course, get a 10-minute clip of Katie’s story with Matt, and as they pan back to her she’s crying. Do we think it’s because she’s sad about Matt or because she’s sad she wore that parka on national TV? You’re trying to get someone to want to bang you Katie, you’re not going out to walk your dog at 6am when no one can see you.

Katie wonders, “is there anyone out there for me?” I’m sure we’ll see that pasted all over her Bachelorette ads soon. At least it’s better than “Let’s do the damn thing!”

Abigail In The Hot Seat

The second this sweet creature sits down in the hot seat I’m reminded how Matt did her dirty.

CHRIS: What happened? You guys were so into each other, had so much chemistry, and then he dumped you. Why couldn’t he love you?
ME:

Chris says that Abigail being on the show has had a massive impact on the deaf community. Oh good! Another community he can offend in an interview! You know behind the scenes the producers are just wetting themselves saying “our ratings with the deaf community have skyrocketed! Which underrepresented group can we target next!” Actually though, Abigail is an angel, and this broken franchise doesn’t deserve her.

Pieper In The Hot Seat

There’s really no point to this interview. Every single person that comes up to the hot seat is forced to rewatch their “love story”, and then Chris says “tell daddy how much it hurts,” and then he dismisses them because daddy doesn’t actually care. It. Is. Boring.

Serena P In The Hot Seat

The word “hot seat” is already giving me PTSD. If this recap ends abruptly, please look for me shaking in a corner somewhere on the west coast of Florida.

Chris is disappointed in Serena. He thought she was the one.

ME, SNORTING INTO MY WINE: Didn’t he see that awkward sex yoga date?

And now Serena is crying. Come on Serena!! You don’t have to do what the other girls did! We know you didn’t like him! Put that Visine back in your sleeve.

Chris tells Serena he thinks she might regret her decision and that she might still love him.

Wow. I’m starting to think Chris really never could read a room and it took Rachel Lindsay to point it all out to us.

Matt In The Hot Seat

Matt finally shows up to his party, and it is a disappointment to say the least. WHAT IS ON HIS FACE?

Chris and the women say they like it and sweetie, they are lying to you. That thing is like making out with a shag rug.

Victoria immediately turns on the waterworks and tells Matt she was offended by the fact he told her she needed to “self-reflect” when she left. Who’s sensitive now, Queen V? Matt tells her, “when people ask me about you I only have good things to say.” I guess laughing when his friends mock her body is technically a loophole to that statement. But with all the apologizing going on tonight, he couldn’t muster one up? I guess he was a wimp this whole season, why stop now?

I really don’t understand the purpose of the women airing their grievances. Who cares? It’s over, and it was fake. If Chris asked me if I had any last words for Matt I’d shout “wear less turtlenecks!” And then GTFO.

Can we get real for a sec? Does anyone seriously think we need these tell all episodes anymore? They reveal nothing new—contestants have already explained their terrible actions to the point of exhaustion on social media, and half the people there barely even appeared on the season. They should be more like Bravo reunions or not exist at all. Let’s accuse each other of f*cking a married ex-MLB player! Who has a drug problem?! Make it exciting! These moments may be messy, but at least they are real(ish). I feel like The Women Tell All was basically everyone reading a press release their publicist wrote for them. In the words of anyone who’s ever had a job, this could have been an email.

Jared and Kay come into this 27th season with their side eye and skepticism but that doesn't stop them from talking all about the premiere of The Bachelor. Jared kindly refers to this franchise as the McDonald's of television and Kay wants to know just how many Dyson Airwraps were used in the making...