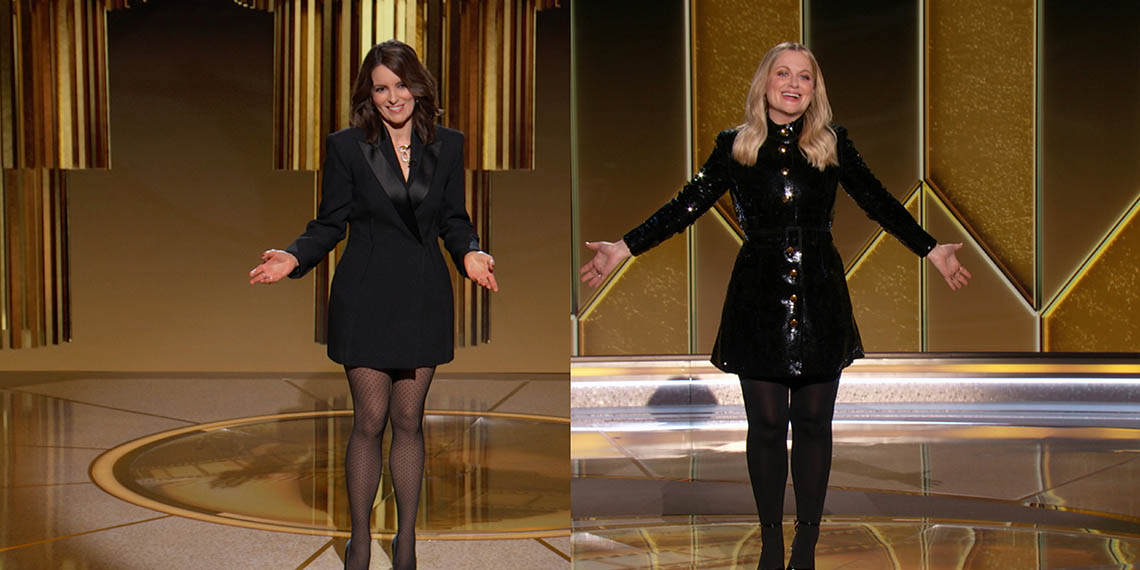 Last night the 78th Annual Golden Globes were brought to us by Zoom, because I guess nobody in Hollywood has gotten the memo about how sick we all are of virtual meetings. This three-hour Hollywood circle-jerk could have been an email, which cohost Tina Fey readily admitted in her opening monologue. Speaking of other things that were unnecessary, this year the Hollywood Foreign Press Association decided to do a bicoastal Golden Globes, filming both in Los Angeles and New York, which I feel like they just did to try to show off their tech skills—tech which backfired immediately, with Daniel Kaluuya’s audio getting cut off for the very first acceptance speech of the night.

Truthfully, I have never really cared about award shows, and in 2021, even less so. If the past 12 months have shown us anything, it’s that we simply can’t just carry on doing things the way we used to. And even though the Golden Globes had nominees video chat into the ceremony rather than making a whole song and dance out of testing everyone beforehand and pretending to have them quarantine before sitting in a room together, not much else aside from the virtual appearances changed. Even before the program aired, controversy erupted when critically acclaimed shows by Black creators were snubbed in favor of their less-than-mediocre white counterparts, something we’ve seen happen time and time again with various award shows, including the Oscars and Grammys. But this year’s issues went beyond Black artists’ contributions being ignored, as a February report by the LA Times brought to light the fact that the committee who decides who is nominated for and wins a Golden Globe is made up of 87 members, zero of whom are Black. On top of that, another LA Times report detailed how easy it is to, ahem, influence which projects are nominated. Notably, it discussed how Emily in Paris flew more than 30 of the organization’s members to Paris and wined and dined them, which could explain how the TV series equivalent of the girl in the Muzzy commercial repeating “je suis la jeune fille” received multiple nominations while shows like Insecure and I May Destroy You got zero.

2021 could have really been a year to change things around. Instead, Amy Poehler and Tina Fey hosted the ceremony again (a decision that, for the record, I enjoyed, but just underscores that the HFPA have no interest in switching it up). There was a confusing semi-in-person red carpet, when there didn’t need to be one at all. The ceremony still started at 8pm EST, and even with Zoom transitions, still ran for three hours. It did not need to be this way!

The tension between needing to change the way things are done, and the powers at be clearly not wanting to, came to an awkward head during the ceremony. In their opening segment, Tina Fey and Amy Poehler criticized the HFPA for not having a single Black member in its voting body. It was better than saying nothing or trying to sweep the lack of diversity under the rug, but it was still kind of uncomfortable since Poehler and Fey still agreed to host the Golden Globes, and presumably collect a paycheck.

Even worse was when the HFPA trotted out its few members of color in an attempt to address the organization’s lack of diversity, with HFPA Vice President Helen Hoehne saying, “Just like in film and television, Black representation is vital. We must have Black journalists in our organization.” They “must”, but they currently don’t, so…? It felt like the organization was attempting to get out ahead of a narrative it is already 20 years behind on. Time’s Up, at least, wasn’t buying it: CEO Tina Tchen wrote in a letter to NBC and the HFPA that the statements made by the organization during and preceding the Golden Globes “indicate a fundamental lack of understanding of the depth of the problems at hand”, saying that its promise to include Black journalists “is not a solution”.

On the one hand, as someone who’s never liked award shows, the Zoom format was better than the usual one, if only because I didn’t have to spend a combined 30 minutes watching people shuffle on and off a physical stage. (Plus, it’s easier to cut someone off by just cutting their audio and video versus having to physically remove them from the podium.) On the other hand, the insistence on maintaining the same level of pomp and circumstance in light of *gestures broadly* everything felt especially ridiculous. Watching all these celebrities pretend to tear up with gratitude in full glam and wardrobe while sitting on their couches felt weirdly emblematic of the past 12 months, and also completely absurd. I mean, I can’t even imagine putting on an underwire bra at this point, let alone a full gown. What is it all for?

From the lack of diversity to the stuffiness and length, Hollywood seems to be holding onto all the least enjoyable parts of award shows with a death grip. That said, there were plenty of memorable moments from last night, including but not limited to: Daniel Kaluuya and John Boyega’s wins; Taylor Simone Ledward accepting an award posthumously on her late husband Chadwick Boseman’s behalf for his performance in Ma Rainey’s Black Bottom (even if the film itself didn’t get nominated for best motion picture); Jason Sudeikis giving an acceptance speech in a tie-dye hoodie; Borat beating out Hamilton. But, I don’t know, I feel like there’s got to be a better way to honor these films and TV shows without all this bullsh*t. Am I part of the problem? Most definitely, but I feel like I’m held hostage here. HFPA created this awards show and the subsequent pre- and post-show hullabaloo, and I’d be missing out on clicks, shares, and likes by not participating. I’m watching not because the show is particularly entertaining, or because I’m invested, but because I’m trapped in this elite media hype pyramid scheme, which feels even worse given the HFPA’s lack of diversity, pay-for-play shadiness, and the allegations that it is improperly subsidizing its members’ incomes. Honestly, I want out. The memorable moments can be a highlight reel, or as Tina Fey said in her opener, an email. We don’t need to keep doing this.