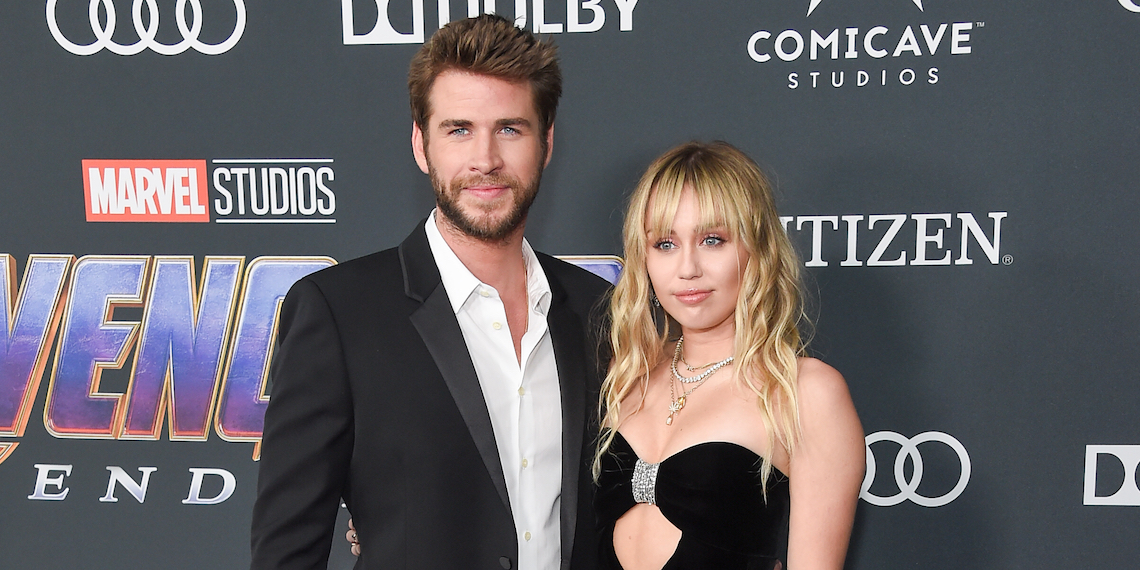 On Saturday, the entire world went into a state of collective shock when we found out that Miley Cyrus and Liam Hemsworth had separated after less than a year of marriage. Though Miley and Liam have only been married for around eight months, their love story goes all the way back to 2009, so their most recent split feels like the end of an era. I mean, am I just not supposed to watch The Last Song anymore, or listen to “Wrecking Ball”? Somebody please advise.

Miley and Liam’s is one of the more unexpected celebrity breakups in recent memory, but Miley hasn’t been shy on social media since the news broke. In fact, she’s basically broadcast her entire Italian vacation, posting more than a dozen photos in the last two days. Obviously everyone experiences breakups differently, but Miley might be overdoing it a little with the posting. Let’s take a look at some of her most recent posts, and try to get a little more of an idea of what she’s going through. We’ll also talk about the situation with Brody Jenner’s ex Kaitlynn Carter, because I’m still not done processing it. Call me Marie Kondo, because I love mess.

Before any of us knew about the breakup news, Miley Cyrus kicked off her European vacation and Instagram spree with the above video of her dancing to Aaliyah’s “Rock The Boat.” It’s an amazing song choice, and Miley looks so great and carefree here. This is definitely a hot girl summer vibe, but little did we know that our perspective on this whole trip was about to change.

That video was from Friday, and on the same day, Kaitlynn Carter posted this photo of her and Miley on a boat, also with a caption about rocking the boat.

Boy, did 24 hours change the context of this photo. When I first saw that Kaitlynn was on vacation with Miley, my reaction was somewhere between “what the f*ck” and actually being impressed that Kaitlynn got this invite. On The Hills reboot, Kaitlynn is pretty insufferable, so it’s surprising that Miley would want to hang out with her enough to invite her to Italy, but hey, it’s not my life.

BUT THEN. On Saturday f*cking night, the news spread that Liam and Miley are done, and there were also photos of Miley and Kaitlynn making out. How am I doing? Not well, bitch! The breakup was already a lot to process, but the thought of Miley and Kaitlynn together is almost too much for me to handle. (Not at all influenced by the fact that I was definitely drunk when both pieces of news came in.) Maybe Kaitlynn is cool in real life and she just didn’t vibe with the crew on The Hills, but she still seems like such a random choice. Miley Cyrus is openly queer, so it’s not shocking that she’s making out with a woman, but this woman?

Then, the plot with Miley and Kaitlynn thickened, when Brody Jenner decided to insert himself in the narrative. He said “Watch out! Pics of Liam and I holding hands on the beach coming soon.” Obviously he’s joking, but I kind of love that he’s not shying away from getting involved here. He and Kaitlynn only split up a couple weeks ago, so there are a lot of moving pieces here.

Then, Miley jumped in with Brody, telling him to take a nap in his truck and cool off. At this point, I have fully no idea what’s going on here, but I’m glad to watch it all unfold.

Miley Cyrus is boom boom clap, boom de clapping back at Brody Jenner after he responded to the news of his ex Kaitlynn kissing Miley. Link in bio for the full story. (?: Getty Images)

We obviously don’t know what’s going on with Miley and Kaitlynn and Brody and everyone else right now, or whether Miley and Kaitlynn’s relationship is headed anywhere, but we do know that Miley has been busy on Instagram since the news of the split. She did a full photoshoot in whatever mansion she’s staying in, complete with this awkward Boomerang that I’m obsessed with:

She had no idea what to do with her leg, and it’s the most relatable she’s ever been. Whether or not Miley is in a good place emotionally right now, she’s definitely feeling herself on this vacation, and I’m happy about that. But to be honest, this is the kind of thing that a Real Housewife would post, and I would wonder if she was having a nervous breakdown. Miley’s other posts seem pretty coherent, but if she posts more stuff like this, I might be worried.

Miley also found a cool chair to pose in, and posted two different photos that are basically exactly the same. To be fair, in the caption of this one, she did warn us that we would be getting spammed, and I do appreciate the heads up. I would literally never mute her though, because I love myself, and these photos are getting me through the day.

Mute me if you don’t want SPAMMED

After she was done with her castle photoshoot (same), Miley moved on to a mountain hike, of course in a crop top because god forbid that we forget she has the world’s most amazing body. In terms of the Instagram content, this is really my favorite portion of the trip so far. Not only is this location absolutely gorgeous, but the captions on these photos seem the most telling about what’s going on with her. This first one especially is pretty deep.

Don’t fight evolution, because you will never win. Like the mountain I am standing on top of , which was once under water , connected with Africa , change is inevitable. The Dolomites were not created over night, it was over millions of years that this magnificent beauty was formed. My dad always told me “ Nature never hurries but it is always on time”…. it fills my heart with peace and hope KNOWING that is true. I was taught to respect the planet and its process and I am committed to doing the same with my own …. ?

There’s a lot going on with this caption, and I’m not actually sure whether it’s about evolution, climate change, her breakup, or all of the above, but I’m into it. I’m not sure if the thing about the mountains being under water and connected to Africa is about Liam, but it could be. Who knows? She quotes her dad saying that “nature never hurries but it is always on time,” and this seems like it could be about knowing when to move on from a relationship. Miley and Liam’s relationship has been an on-and-off journey over an entire decade, so I’m sure the decision to end things wasn’t taken lightly.

Life’s a climb… but the view is great.

But this, this is really the pièce de résistance of the whole trip. It’s almost the exact same photo as the picture before, but you guys…THE CAPTION. Quick Miley Cyrus history lesson for anyone who’s lost: Miley’s song “The Climb,” which is from the Hannah Montana movie, was released in March 2009. Miley then started dating Liam while filming The Last Song just three months later, in June 2009. By those calculations, “The Climb” was probably one of the last songs that Miley did before she met Liam, and the message couldn’t be more perfect for where Miley’s at right now. And yes, I’m listening to “The Climb” and crying at work right now, what about it?

And what’s up with Liam Hemsworth right now? Unlike Miley, he’s not the type to be all over Instagram with his feelings, but he did give a comment when approached by The Daily Mail Australia, saying that “You don’t understand what it’s like.” This is technically true, considering that I’ve never been married, but I’m so curious to know more about the specifics of this breakup. Whose decision was it? Are things like, over over, or are they just on a break? Are Brody Jenner and Liam going to hook up next??

Liam broke his silence and our hearts. ?More heartbreak lives in the link in our bio. (?: Getty)

In the end, whether Miley Cyrus and Liam Hemsworth get back together or not, I hope that they’re both doing well, and are happy with whatever happens. It seems like Miley’s been having a good trip to Italy, but we don’t really know what’s going on beneath the surface with her. And it seems like Liam might not be doing amazing, but we don’t really know about him either. Hopefully there will be more updates soon, but for now I’ll take all the Lake Como Instagrams I can get.

UPDATE: It’s now Tuesday morning, and just as my obsession with decoding Miley’s Instagram posts was starting to subside, Liam Hemsworth has officially entered the chat. Sadly, there are no photos of him making out with Brody Jenner on a yacht, but he did post a dramatic sunset pic with a caption addressing his and Miley’s split.

Hi all Just a quick note to say that Miley and I have recently separated and I wish her nothing but health and happiness going forward. This is a private matter and I have not made, nor will I be making, any comments to any journalists or media outlets. Any reported quotes attributed to me are false. Peace and Love.

He wishes her “nothing but health and happiness going forward,” which actually makes me think that this might be over for good. There’s no mention of working through differences, or rebuilding their relationship—just health and happiness. This really is the end of an era. Then, Liam clarifies that this will be his only public comment on the situation, which calls into question the truth of the quote attributed to him by The Daily Mail Australia.

I’m glad that Liam acknowledged what’s going on, but I also respect his decision to not comment publicly on what happened with him and Miley. Hopefully at some point his brother Chris will get a little too drunk and spill the beans to the paparazzi, but until then we’ll just have to read between the lines on social media. Miley has been quiet on Instagram since she posted all those hiking pictures, so either her vacation is over, or someone took her phone away. Miley or Kaitlynn, if you’re reading this please send updates!!!