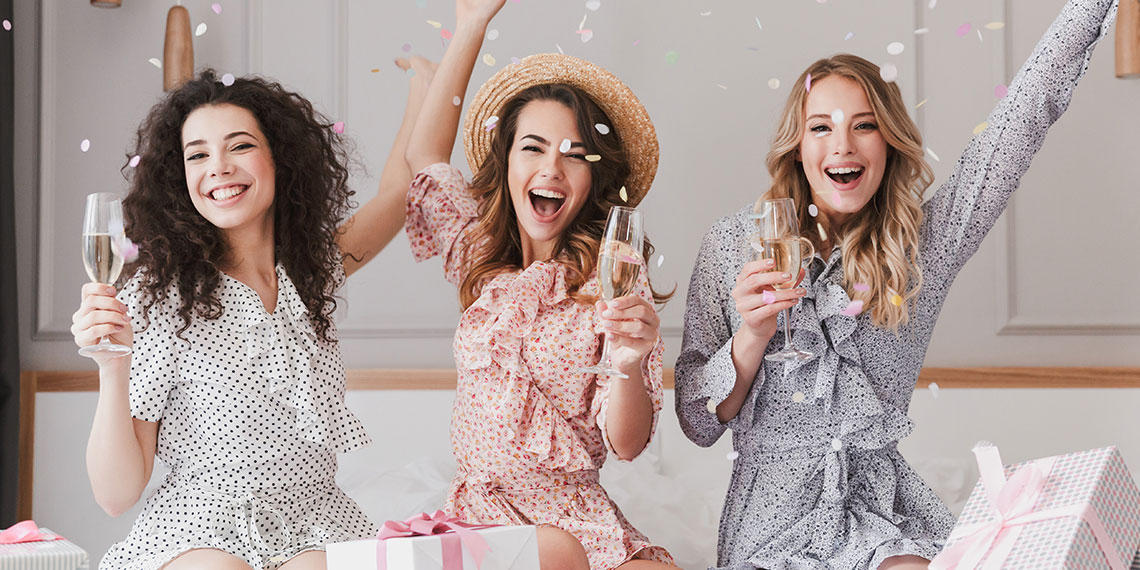 As a recently married woman who thinks daily about the things she wishes could change about her wedding, I still find myself stalking wedding Facebook groups, attempting to heave wisdom upon unsuspecting brides-to-be like an old witch in a Disney movie (but like, a hot old witch, right?).

Naturally, as more and more of my friends get engaged and I feel the fiery jealously of no longer being the center of attention, I’m here to help them plan their perfect days. Like any wedding bitch knows, after the festivities are over, you’re kinda just sitting around wondering “what the f*ck do I do now?” So, you plan other peoples’ sh*t and try to act like the fact that you’re irrelevant doesn’t keep you up at night.

So, my big tip of the day for any brides-to-be out there? Don’t sleep on the bridal shower. I know by the time you’ve planned your rehearsal dinner, ceremony, cocktail hour, reception, after-party, and most of the bachelorette party (because let’s be real, your MOH isn’t going to do it exactly right), you don’t have the energy to give a sh*t about a shower where your mom’s friends will get tipsy and make outdated, suggestive jokes.

That, my beautiful brides, is where you’re so very, very wrong. Naturally, the shower seems like the lamest of the parties (rightfully so), which is why this is truly your chance to wow your guests. And the best part? You don’t even have to be original because everyone’s just expecting to show up and throw presents in your perfectly made-up face. Utilize any one of the themes below and relish in the fact that while they might elicit eye-rolls because they may not be the most original, they’ll absolutely up your engagement season aesthetic.

Like pumpkin spice, oversize sweaters, and being obsessed with Beyoncé, there’s a reason things are basic: because they’re good. So, f*ck it. Order those expensive crustless cucumber sandwiches and throw a petticoat on under your floral print dress—it’s your party, goddammit, and you can be basic if you want to.

Why People Will Hate It: Your guests will have to squeeze the event in with all of the other identical tea party showers happening this year, but hey, at least they can reuse their sunhats!

Why It’s An Instagram Win: Sundresses? Finger foods? Wearing wide-brimmed hats inside? While there’s nothing unique about spiking your tea or drunk-eating macarons, there’s also nothing not worth putting in your story, so chill on the criticism and enjoy the perks of being a basic ass bride.

incase anyone was confused, the best gift to give for a wedding is cold, hard cash

Fact: 8/10 brides will go to Paris for their honeymoon. Disclaimer: I don’t actually know if that’s true but it seems hella likely because, f*cking duh. It’s Paris. Either way, the honeymoon is one of the most important components of the wedding because you finally get to eat, sleep, and stop making small talk with pushy relatives. Why not dedicate your shower to the (most likely) European destination you’re visiting, so you can brag about the trip you’re going on while simultaneously stocking up on travel essentials?

Why People Will Hate It: Awww! Buying you presents for the romantic, month-long trip you’ll be taking that they’re not invited to? What’s *not* to hate?!

Why It’s An Instagram Win: Sure, there will be some cute ops during the shower, but more importantly? You’re setting yourself up for social media success when you finally jet off with your ball and chain the love of your life. Those matching Away suitcases? Check. The rose gold passport holder with a few hundred euro tucked inside from grams for the casual “at the airport with my passport” shot? Mhmmm. The professional photographer to snap pics in front of the Eiffel Tower? Done and done.

Between flapper gowns, feathers on every surface, and sequins you’ll be pulling off of your body for the next decade, the Gatsby theme is sooooo been there, done that, did it again and don’t want to do it again. Still, say what you will, but any excuse to be extra and don a faux fur coat is fine by me.

Why People Will Hate It: With 2020 very near on the horizon, our social calendars are already going to be saturated with art deco-inspired parties. While yes, that means your guests already have the headbands and skinny cigarette holders, how many 1920s dresses do you *really* want hanging in your closet?

Why It’s An Instagram Win: I don’t care how many 1920s parties I’m forced to go to: there’s just something so f*cking great about them. Whether it’s the excuse to dress like an old Hollywood star or slurp Champagne like it’s illegal, the theme may be overdone but my God, it’s still glamorous as hell.

Going to a bridal shower tomorrow where the bride has requested we all bring our favorite bottles of wine, as a gift.

I hope we don’t have to put our names on them. I know nothing about wine, other than I like the kind with alcohol in it.

As far as basic bitch themes go, this one is easily the best. The whole point of it is to just get drunk. Sure, there’s the ruse of being sophisticated and detecting the different notes in different full-bodied reds, but in reality, it’s just an excuse to get schwasted with multiple generations of women while you make penis jokes. Which is, of course, the ideal way to enter married life.

Why People Will Hate It: Whether it’s involving a rental shuttle, trips to multiple vineyards, and tastings at each stop (happily paid for by your maids, of course), or just a sh*t ton of wine in your aunt’s sunroom, everyone will either shell out a whole lot of cash or a whole lot of Advil the next day at work.

Why It’s An Instagram Win: I’m sorry, have you ever gone to a vineyard and not taken a bomb-ass photo? Between the cute outfits, the alcohol-induced poses, and the grapevine backdrop, getting likes on winery photos is just like, the rules of Instagram.

The destination bachelorette party wasn’t enough. The destination wedding wasn’t even enough. You felt the need to suck every last cent out of your friends’ bank accounts in order to have the most over-the-top celebrations of all time. Is this a ploy to make all of your guests so poor that by the time they’re engaged they’ll have to settle for a backyard wedding with a first-generation iPod as the DJ? Maybe. But it also means that your shower will be better than anyone else’s shower, and that, my dears, is a gift in itself.

Why People Will Hate It: Oh, hello. Another chance to buy a flight, split a hotel room, and overpay for watered-down cocktails by the pool? Fun!

Why It’s An Instagram Win: Assuming you’ve been working out like a f*cking beast for your wedding (which you have, of course, because you’re having a destination shower where you’ll 100% be in a swimsuit), this is yet another opportunity to show off your abs while chugging vodka sodas like they’re water.

just gotta make absolutely sure – girls who post long captions about their bf full of inside jokes know that they don’t HAVE to do that right??

The couple’s shower is easily the one you’ll come across the most often and will absolutely be the most upsetting for your guests. In theory, it seems great: you can keep an eye on your man while you and your MOH judge the girl who decided to wear an off-white wrap dress. In reality, however, all of the guys will just stand around, having no idea what to do as the couple unwraps presents for two hours and the non-engaged girls will end up either fighting with their boyfriends in your parents’ backyard about why they’re not married yet or else crying over being single.

Why People Will Hate It: Relationships will literally crumble and you won’t be able to make fun of your SOs like you would have if the guys just stayed home the way the wedding Gods originally intended.

Why It’s An Instagram Win: With plenty of useless men hovering around with absolutely nothing to do, there’s always someone to snap a pic for the ‘gram, and honestly, isn’t that what getting married is all about?