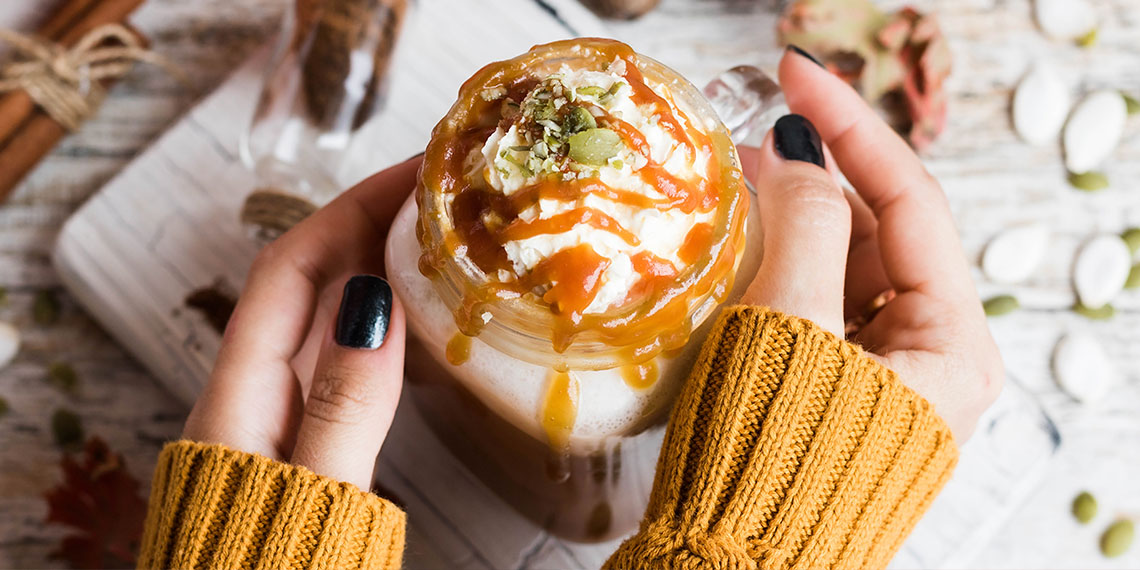 When our Instagram feeds are flooded with images of apple picking and cable knit sweaters, it can only mean one thing: pumpkin spice season is upon us. Every year, like a “u up?” text at 2am, people from all over put on their UGGs and flock to the nearest Starbucks in search of the coveted pumpkin spice latte. But why? Why is it that we have this undeniable need to have pumpkin spice coursing through our veins? Where did this obsession come from? What is driving our addiction to all things pumpkin spice? Well as it turns out, there are scientific reasons why you can’t get enough of this fall favorite.

Available for a limited time only: six words that can have us ready to shove our grandma out of the way in order to get to a small reserve of goods. Are we just insanely greedy, or can we blame science for this? According to psychologist Jack Brehm, we are hard-wired to crave things that are not always available. Through Brehm’s discovery of reactance theory (where, when people feel restricted, they feel a strong need to gain back their freedom) he finds that when we are told we can no longer do/have something, we then infinitely want do it/have it more. In layman’s terms, we want what we can’t have. In one of Brehm’s most notable studies, he asked participants to rank three records that they would like to have, Brehm then informed them that their third option was no longer available, and ask them to rank their top three choices again. What he found was that people then ranked their original third choice first, simply because it was no longer available, and thus more attractive to them.

It’s the same in relationships, like the art of playing hard to get, or only wanting the guy you keep on the backburner strictly for attention when he’s seeing someone else. You never give the guy you friend-zoned a romantic thought—that is, until he starts dating someone else and then he instantly becomes Brad Pitt in your eyes. Now that they are no longer available you will stop at nothing to get them back, running through airport security to stop them at the gate and ask them to split a PSL with you while you ride off into the sunset. I digress, but you get the idea. If you’re told you can’t have something, that only makes you want it more. I wonder if advertising firms have caught on to this yet?

Pumpkin spice season only comes around once a year, meaning for the rest of the year we won’t be able to have it, no matter how much we want it. As Brehm has taught us, we as a result want goods, like pumpkin spice lattes, more because we’re told that soon we can’t have it at all. This dared me to ask the question: Do I even like pumpkin spice or do I just want it because I can’t have it? In my case, turns out it’s a little bit of both.

Ahhh, the scent of the holidays, inhaling the jolly wonders of pumpkin spice and everything nice. In a 2017 interview with CNN, the assistant professor of psychology and director of the neurostudies minor at Longwood University in Virginia, Catherine Franssen, says that sugar and spice combinations can evoke happiness and flood our senses with blissful childhood memories, like holiday traditions—or, in my experience, making out with your high school boyfriend in his car underneath the pumpkin spice air freshener, which is also technically a holiday tradition. Don’t judge. Franssen also tells CNN that we relate the smell of pumpkin spice to happy times because we encounter this spice blend early in life, like baking pies at grandma’s house or whatever.

So while we’re busy feeling all warm and fuzzy, we become completely oblivious to the fact that pumpkin spice has manipulated us into feeling happy. How rude, right? Not only that, but Franssen also writes in her 2015 article for the Huffington Post that smell can account for up to 80% of flavor, so that because we are enamored with the scent, we then in turn enjoy the food or drink even more.

This may come a shock to you, but sugar is highly addictive, and occasionally Starbucks drinks with names longer than a royal title can be packed full of sugar. Sorry to have to horrify you with the calorie count of a PSL, but a grande pumpkin spice latte with whipped cream at Starbucks contains 380 calories and 50 grams of sugar, while a tall size still has 300 calories with 39 grams of sugar. With stats like that, you might want to rethink your morning pick-me-up, or at least not make it a daily occurrence, because consuming mass amounts of sugar can leave you wanting more mass amounts of sugar. As cited by scholars, Serge H. Ahmed, Karine Guillem, and Youna Vandaele in their academic review, Sugar Addiction: Pushing The Drug-Sugar Analogy To The Limit, sugar has been alluded to be just as addictive as another white powdery substance that can also fill you with bursts of energy. Cocaine, I’m talking about cocaine.

As Catherine Franssen continues on with CNN she relays that, combining the enticing scent with copious amounts of sugar, especially when you’re hungry, can lead to a subconscious association of feeling totally satisfied. Through this process, you have now successfully tricked your nervous system into craving pumpkin spice, and that without it you may very well spiral into a state of unwavering despair. That may sound a bit dramatic, but honestly if you have ever been denied a pumpkin spiced muffin or latte, you know the feeling, and have most likely broken down into tears in the middle of a crowded Starbucks. No? Just wait, it will happen to you too.

Pumpkin Spice And Everything Nice

Okay, now what have we learned? Pumpkin spice products contain insane amounts of sugar, it can remind us of joyous times in our lives, and thus leaves us craving it because we can’t always have it. So thank you science for giving us valid reasons behind our unsettling obsession to the effects of pumpkin spice.

Since it only happens once a year, we can agree to call it a healthy obsession, right? Also, if you have been taking a drink every time I’ve said the words pumpkin spice, I’m seriously impressed, and you should also probably go get your stomach pumped now.