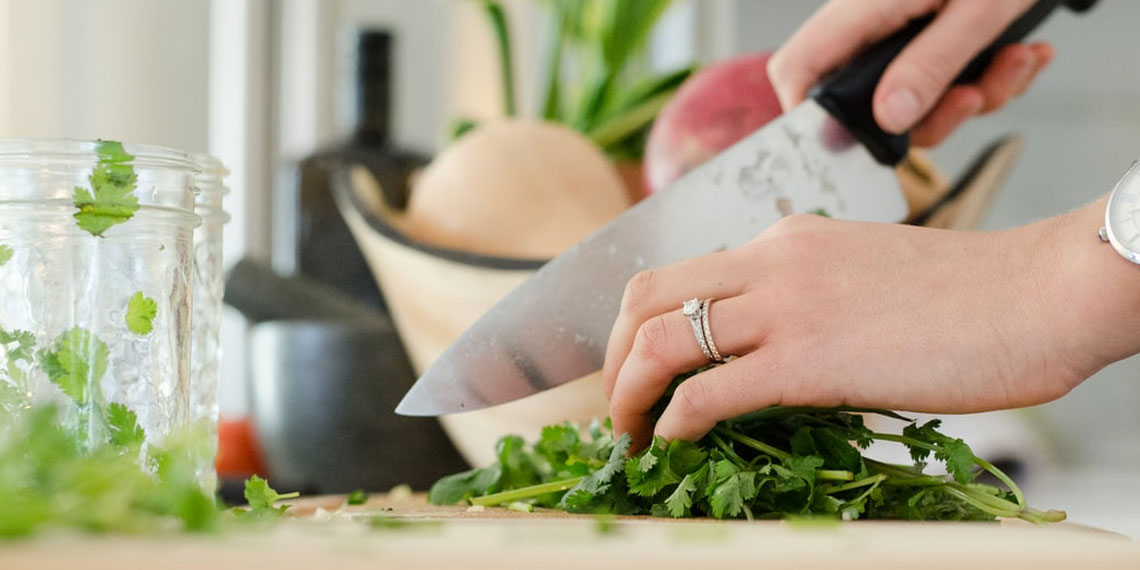 12 Kitchen Gadgets To Make You A Better Quarantine Cook

Since we’re all going to be living indoors for the foreseeable future, it’s probably time you learned how to f*cking cook. Even though Sex and the City taught us that ovens are for storing sweaters and fridges are only really meant for alcohol, I think the ongoing nature of these trying times means we need to face facts and like, cook food.

But grabbing a few ingredients and creating a masterpiece with nothing but a pan and wooden spoon isn’t the case for, well, most of us. Even when I pretend Gordon Ramsay y is over my shoulder and calling me an idiot sandwich, I can’t quite muster the culinary prowess I know that he thinks I’m capable of.

Mean celebrity chefs aside, here are a few of our favorite kitchen gadgets and must-haves that’ll make your meals (or desserts) come together a bit easier.

An oldie but a goodie. A slow cooker (specifically, a Crock-Pot) is the gadget to have in your cooking arsenal when:

Many recipes created for the slow cooker will require you to simply get a nice golden brown on meat or veggies, then throw them into the slow cooker with spices and sauces. Other recipes literally require that you dump everything in, put the top on, and let that sh*t mingle for eight hours. Those kind are my favorite. Whatever the case, this is the go-to when you simply cannot even think about standing over a stove and creating something special. Plus, the aroma that will fill your home when something like slow cooker chicken chili verde or slow cooker barbacoa beef is cooking is worth every penny.

If you’ve ever made a soup or sauce that requires several steps, and one of them happens to be “transfer two cups of the boiling hot liquid you’ve created to a blender”, then an immersion blender is the tool for you. I use this sh*t on the reg for sauces, stews, and things I create when I’m drunk. Basically, it’s a blender “wand” that you can stick into the pot of boiling liquid in front of you without having to transfer cups of it to an actual stand blender. It makes cleanup easier, it’s kind of fun, and you’ll feel like you’re cheating the system a little.

For going from the stovetop to the oven to the fridge, you need a Dutch oven. It’s the pot that can do it all, from boiling your sad pasta to creating a classic dish like boeuf bourguignon. We recommend Le Creuset, the be-all and end-all of Dutch ovens. The bottoms heat incredibly evenly, they come in an assortment of amazing colors, and they’re literally guaranteed for life.

You know how you have a hankering for some homemade salsa but chopping six onions and five jalapeños and all those tomatoes just doesn’t seem worth it? Go get yourself a good food processor. On the days you don’t want to chop garlic or shred cheese—boom, food processor. Honestly, it seems like a one-trick kitchen tool, but having a decent food processor will go a long way in your prepping life. So, you’ll have more time for important sh*t like catching up on the absolute sh*tshow that is Outlander.

Full disclosure: I don’t have an Instant Pot, but I can see why you’d want one. Basically, the Instant Pot makes it possible to do all of the steps for one dish in one pot. So if a recipe calls for sautéing meat then braising it then saucing it, you can do it all in the same pot thanks to it having a million different settings.

Sounds weird, but hear me out. You’ll notice on like, every cooking show, that chefs and chef-wannabes use those cool metal tongs for everything. It’s because they can easily turn over pieces of meat, grab sh*t out of the oven, be used on or around a grill (or open flame), and are really hard to damage.

Everyone is making f*cking bread in quarantine, and, as someone who watched her husband struggle-bus through making baguettes (LOL), I can tell you that having a heavy KitchenAid stand mixer came in especially handy. Even if you aren’t attempting something like bread and are more of the “let’s make cookies” mentality, having a stand mixer do the work for you so that you don’t have to stand and beat eggs for 10 minutes is extremely helpful.

There’s literally nothing more dangerous in the kitchen than a shitty, dull knife. Well, maybe like, a grease fire or your mother-in-law’s judgment, but you get the idea. Having a good, sharp, and dependable knife will make your life so much easier. When you’re taking edges off meat or chopping an apple or anything else, get a good, sharp knife.

You grandmother definitely had five of these, and for good reason. A cast iron skillet results in amazing caramelization on meat and veggies, lasts literally forever, and can be used for everything from steak to giant skillet chocolate chip cookies. There are a few tips and tricks to taking care of one, like never using soap on it, cleaning with salt and oil (yes, really), and occasionally “seasoning” it in the oven, but, all that aside, this is definitely one of the top kitchen “gadgets” that will stand the test of time and result in some truly delicious sh*t.

Do you f*cking love fried food but f*cking hate calories? Grab an air fryer and get to work. The circulation of very little oil plus air results in the crispy, slightly crunchy/greasy taste you love without you having to actually deep fry anything or eating 1,000 calories in one sitting. Sure, you may not use it all the time, but being able to easily, quickly, and safely make French fries without ordering takeout or trying to properly heat an actual vat of oil seems worth it.

Normally, I’d say something like an egg poacher is a f*cking waste of money. HOWEVER, upon actually trying to poach an egg (all as part of bettering myself during quarantine), I can tell you that, for a beginner, it’s kind of hard. For $7 and change, you can grab this little egg poacher helper thing-a-ma-do. I don’t know why it works, but it makes having Eggs Benedict as part of virtual brunch a lot easier.

Maybe you’re one of those annoying people who’s taking advantage of the quarantimes to readjust your life and eating habits. Like, jazz snaps for you. And, if that’s the case, you def need a good steamer basket so you can get the perfect consistency for your broccoli or green beans or chicken breast without drying sh*t out or making it very wet and sad (like when I send my dog outside to pee in the rain). The Bloom Folding Steamer Basket fits in pretty much any pan, is nonstick, and self-adjusts in terms of size. At $10, there’s really no excuse NOT to have one.

Regardless of how you’re living your best quarantine life, now is definitely the time to explore your kitchen and culinary skills, gadgets or not. If nothing else, call your mom, dad, or grandmother and ask about what they can’t live without in the kitchen.