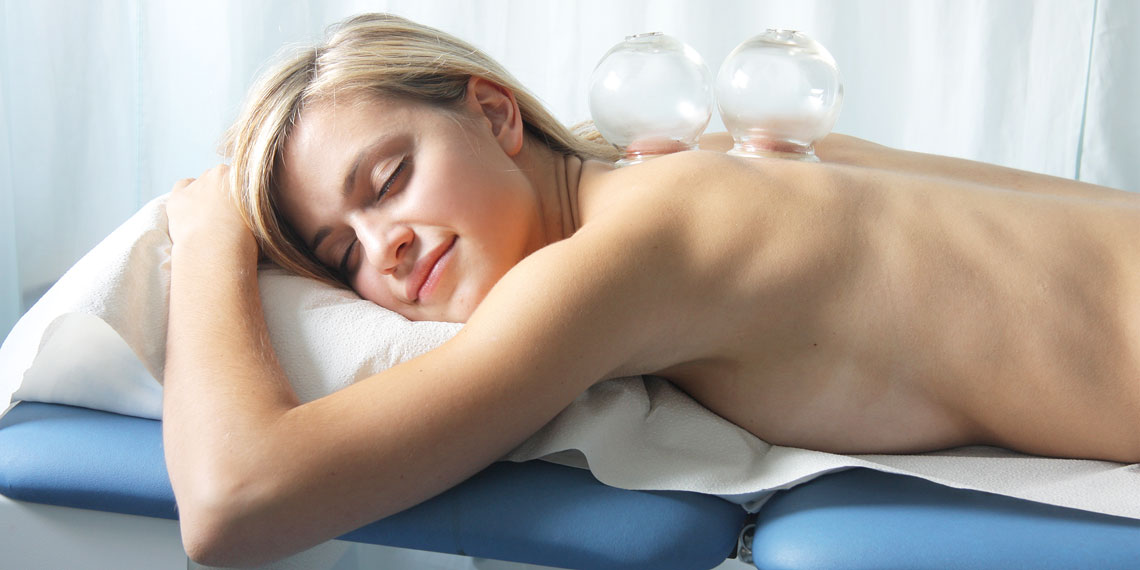 Does Cupping Really Work? Why Celebs Like Kim K & Jennifer Aniston Do It

Another day, another Gwyneth Paltrow trend gone too far. (Kidding! Though she was ahead of the curve on this one.) You might know about cupping because of all the celebrities who have posted about it in recent years, but cupping is actually an ancient Chinese alternative medicine that works by facilitating circulation in the body. Celebs including Kim Kardashian, Jennifer Aniston, Victoria Beckham, and Michael Phelps have all tried the treatment out—and most have sung its praises. Basically, it seems like yet another treatment the rich and powerful have known about for years, and it’s finally trickling down to us regular people. Bless up. To learn more about the treatment that may or may not be responsible for Paltrow and Aniston’s eternal youth, I spoke with Ani Baran, L.Ac at NJ Acupuncture Center. Here’s what I found out.

What Does Cupping Do?

It seems like every celeb-slash-cupping fan has a different reason for loving it: Phelps uses it for muscle recovery, obviously, while Kim Kardashian does it in facial form to reduce wrinkles. What is it actually doing to give such a wide range of results? Baran explains: “Cupping the muscle and other tissues upwards.” This helps to “decrease muscle tension while refreshing blood flow,” which in turn promote muscle healing, relieves pain, and can even help with immunity and digestion. “It’s almost like the equivalent of a deep tissue massage,” Baran added. “But instead of having a trained masseuse knead your muscles to release pain and tension, it uses suction.”

If you’re still wondering how this plays into skin care, don’t worry—I had the same question. According to skincare Guru Nurse Jamie, the key is in the increased blood flow that cupping produces. Apparently, increased blood flow equals stimulated lymphatic system equals reduced inflammation, fine lines, and wrinkles. Yay! Science is hard, but so worth it.

Who Would Benefit From Cupping?

According to Baran, “nearly everyone.” And given the fact that improved blood flow and circulation does improve such a wide array of symptoms, that’s probably true. But people who might actually need cupping to improve their day-to-day lives would be elite athletes, or anyone seeking pain or stress relief. Whatever it is, be sure to go in with a clear idea of what you’re seeking to treat. Per Baran, any initial consultation for a cupping appointment will include a discussion of “complaints and goals.” (And no, “not having Gwyneth Paltrow’s skin” is not a valid complaint.)

Here’s where it gets fun. The main reason we all know about cupping now, despite celebs’ best attempts to keep it for themselves, is that it leaves a telltale mark. Well, marks. As shown in the above Instagram, a cupping appointment leaves you with a series of raised red bumps. I asked Baran to describe a typical cupping session, and here’s what she told me: “You will sit or lay in a comfortable position as cups are applied, typically to larger, flat areas. Using heat or fire, the cups are applied at an angle that creates deep suction, and pulls toxins away from the body as it works deeply into the muscles. Usually the cups are applied for anywhere between 10-20 minutes.”

Sounds easy enough, right? Honestly, Paltrow and others describe the feeling as relaxing, though some other reviewers experienced more pain and discomfort. Ultimately, for how gruesome the treatment looks, I’m glad people aren’t leaving in agony. And yes, I do feel incrementally more desperate to have my toxins flow out into little suction cups every time I look at a picture.

I need to give a huge thank you to @thestretchboss @belowbodybar and @frankstinsonifbbpro for working the knots out today. It’s been a while since the top half of my body moved like this. The last time I had cupping done, I convinced my kids that I was attacked by the kraken while on my pirate ship. They were upset when I told them the truth a few days later. I think because they had hoped I really was a pirate. Little do they know that I still listen to some of the songs I downloaded from Kazaa back in the day, so I’m still a swashbuckler of sorts. #avastyescallywags #recovery #thestretchboss #cupping

Where Can You Get It Done?

Baran recommends looking to acupuncture centers for this treatment—according to her, that’s “where you’re more likely to find highly trained practitioners who are well versed in this.” As for cost, I surveyed five acupuncture centers that offer the treatment in NYC, and was quoted between $100 and $150 for an initial appointment. It’s worth noting that you may need more than one treatment to get the effects you’re after, but Baran notes that some clients will feel results “in as little as one session.” She also notes that pricing can vary “based on region and the practitioner’s expertise,” so feel free to shop around—but don’t skimp on quality. An amateur could very well leave you with serious burns or bruises, so this is not the time to go for a discount option.

Now that cupping is less mysterious to me, I can’t say it’s less enticing. The logic of improved blood flow and circulation is hard to argue with, and I’ve had good experiences with acupuncture in the past—this seems like an intensified version. I’m certainly not in the “elite athlete” category, but maybe I’ll book a cupping session next time I can’t walk after Barry’s. If it’s good enough for Gwyneth…