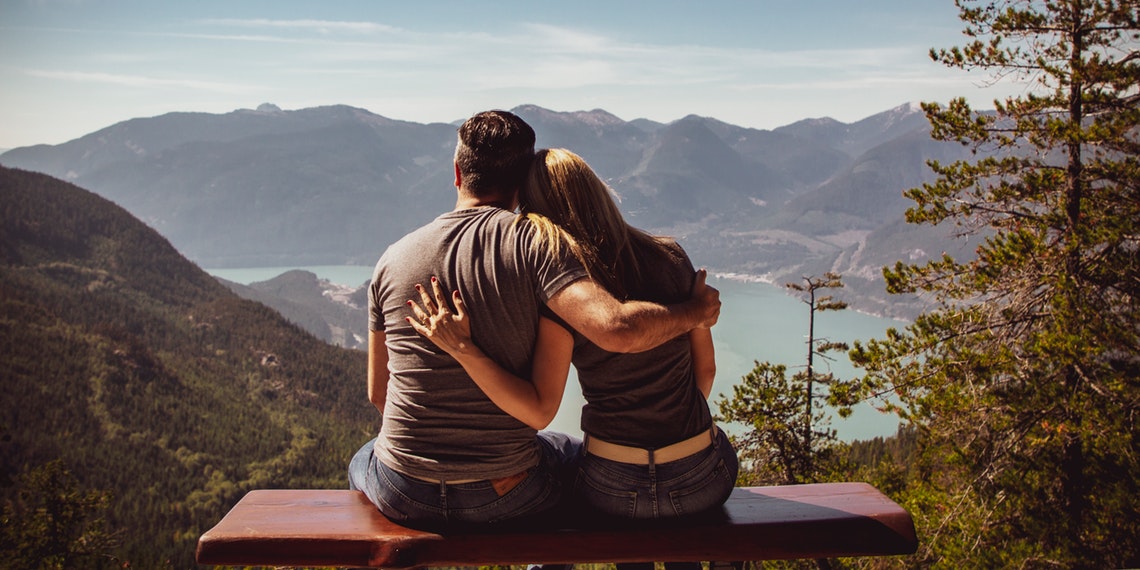 Will You Always Love Your First Love? An Unofficial Study

If you would have pulled bits and pieces of different boys out of different coming-of-age novels, that’s who Adam* was. A true Judy f*cking Bloom character. He was beautiful, with his dark, curly hair and unsettling hazel eyes with a green speck right next to his left pupil.

When I look back now, it almost feels like I wrote my first love story for some young adult audience, ready to be turned into a Netflix film starring Noah Centineo. The sepia-hued memories of us napping in fields, making out in the back row of the movie theater, writing long, embarrassing Myspace (yes, Myspace) posts for each and every one of our monthiversaries—we were the definition of a teenage cliche.

He was all wrong for me because, of course he was. Maybe that’s what made him right? He would pull his hoodie over his head and sleep in the back row of class, waiting for the hangover from the senior party he went to the night before to wear off. He made out with girls two years older than him because they all thought he was hot enough to slum it with, his easy confidence and built arms from years of rowing crew luring them in.

There was no reason for him to pay attention to me, and I had no reason to accept his advances. So, naturally, we fell grotesquely, painfully, horribly in love.

From the note he passed in science class asking me on a date to our dramatic breakup (not the first one. Orrrr the second one. But the third one. That one) to the years-later, post-breakup, “let’s pretend this didn’t happen unless we’re getting back together” hookup on the beach, my first love was the stuff of adolescent fantasies everywhere. And the best part? During it all, I felt like I was the only person in the world to feel that intensely, that strongly, that much.

Turns out, almost every other failed first love story has the same premise. That falling. That unsteadiness. That “maybe I’ll never get over it even though I’m actually totally over it” feeling. While some people say they feel nothing for their first loves, the rest of us can admit that just because it didn’t work out, and just because you might not still be in love, there always seems to be ~something~ about your first love that you just can’t shake.

As I typed that, I had a total Carrie Bradshaw moment and couldn’t help but wonder: Why do we even care? For most of us, our first loves are LONG gone and out of our lives, so why do the ghosts of those relationships linger on and haunt us well beyond our final goodbyes?

In order to get to the bottom of my musings, I reached out to Judge Lauren Lake of Lauren Lake’s Paternity Court, because if anyone is an expert on love and heartbreak, it’s the woman who has made a career of educating those with broken hearts and helping them heal… not to mention punishing the assholes who hurt them.

According to Judge Lauren Lake, “First loves are usually so intense and often between two immature people, so, ultimately, they serve as the foundation for future relationships.” (For better or for worse.)

Which means that no matter how your first meaningful relationship went down, your brain literally uses it as the baseboard for all future relationships because it’s, to pull out a word from the 5th-grade science fair, the control. Which is why you might randomly have dreams about said ex or think of them from time to time, even years after things went to sh*t—which, thankfully, doesn’t mean you’re a psycho.

“It happens because you’re human,” Lake says. “Love doesn’t just end when someone breaks your heart. It’s very possible to have love for someone who isn’t your Mr./Mrs. Right, especially if it was the first person you thought was going to be your lifelong partner.”

Art Aron, a psychology professor at State University of New York at Stony Brook who specializes in close relationships, told The Washington Post, “Your first experience of something is going to be well remembered, more than later experiences, presumably there’d be more arousal and excitement, especially if it’s somewhat scary.”

And honestly? There are very few things scarier than falling in love. It’s a nonstop anxiety trip of will they or won’t they, do they or don’t they. It’s exhausting and panic-inducing, but that rush is so powerful that humans have been chasing it for centuries. “Even in a fully developed adult brain, the neurological response to being in love with someone is very strong,” says Art. “It’s the same as being on cocaine.”

So, for the not fully-formed adolescent brain pumping weird thoughts into a body full of hormones and Mountain Dew, the feelings, responses, and the lasting effects of falling is love are completely magnified.

“Love doesn’t happen overnight,” says Lake. “It doesn’t end overnight, either. When you truly love someone, there will always be a part of you that still loves them, even if they did you wrong. It is still possible to have love for someone but know you have to move on from them.”

Can u imagine getting married and having a family and staying in love until u die, then waiting in the afterlife for your wife to join you and she finally dies and ditches u for a dude she knew for three days on a boat instead?? Anyway I’d give Titanic a 9/10

Easier said than done, right? Still, if you have those lingering feelings, it might be important to take a closer look before they cause real damage to your current or future relationships. While things you learned from those firsts are important (like knowing that you don’t have to stick your tongue in someone’s mouth every time you kiss), there’s a limit. While that first person might be part of your future foundation, there’s a fine line between learning from those experiences and leaning on them.

According to Lake, “You have to be careful not to make your first love a figure in your future relationships. No one wants to hear about someone’s ex all the time, even if it is a first love from years ago.”

“Having love in your heart for someone and still pining for them are two very different things,” says Lake. “It’s important to evaluate whether or not you have an unhealthy attachment to your ex. Are you consistently and consciously comparing new people you’re dating to them? Do you still fantasize about being in a relationship with them? Do you regularly look at their social media accounts? Do you still have all of their pictures in your phone? Did you save their texts? Do you drive by their house?”

While most of us (I hope) would realize that the ol’ drive-by move is total You style stalking, some of the other unhealthy habits might be a little harder to not only detect, but also break. As stated before, love, and especially first love, is as addictive as cocaine. Which means that while it’s fun and exciting and keeps you up all night and makes you feel insanely sexy, it can also be pretty effing unhealthy. While those little first love-related pastimes might feel harmless, they could be detrimental in the long run.

According to Lake, “If you answered yes to any of those questions, you may need to admit that you’re still hung up on or have attachment issues to your ex. If so, you NEED to spend time doing the work to heal yourself before you get into a relationship with someone new or to better move forward with the person you’re with.”

Naturally, the big question is “how the f*ck do you do that if you’re so obsessed that you considered driving by their house when you were visiting your family for the holidays?”

“Stop romanticizing it! At the end of the day you left, or they left you. Let go of those unrealistic and unhealthy fantasies,” says Lake. “You might have to just accept the fact that you may never truly get over this person completely. But you can definitely learn to live life without them.”

While taking the steps to fully, finally, and healthily get over them means making pro/con lists, burning all of their sh*t that you still have in a box and then saging your apartment, or seeking professional help, know that “losing your first, or any, love isn’t easy for anyone,” says Lake, “but you can overcome it and access the limitless possibilities for love and happiness that are in your future. One of the most important relationship lessons to learn is that it takes more than love to sustain a great relationship.”

You know, like communication, patience, and pretending that hearing him talk about his fantasy football team doesn’t make your vagina totally dry up. See?! Healthy relationships!!!!!!

So, whether you’re totally over him or still in the process, post your sloriest thirst-trap and say goodbye to past relationship hangups in 2020. The best gift of all? Knowing that no matter how good his life is now, there’s a 100% chance he’ll see your post and hate himself for f*cking things up with you. And THAT, my loves, is the ultimate cure for heartbreak. Well, that and seeing that he ends up on Lauren Lake’s Paternity Court someday. Here’s to hoping!

*name has been changed because, despite popular belief, I’m not a TOTAL psycho.