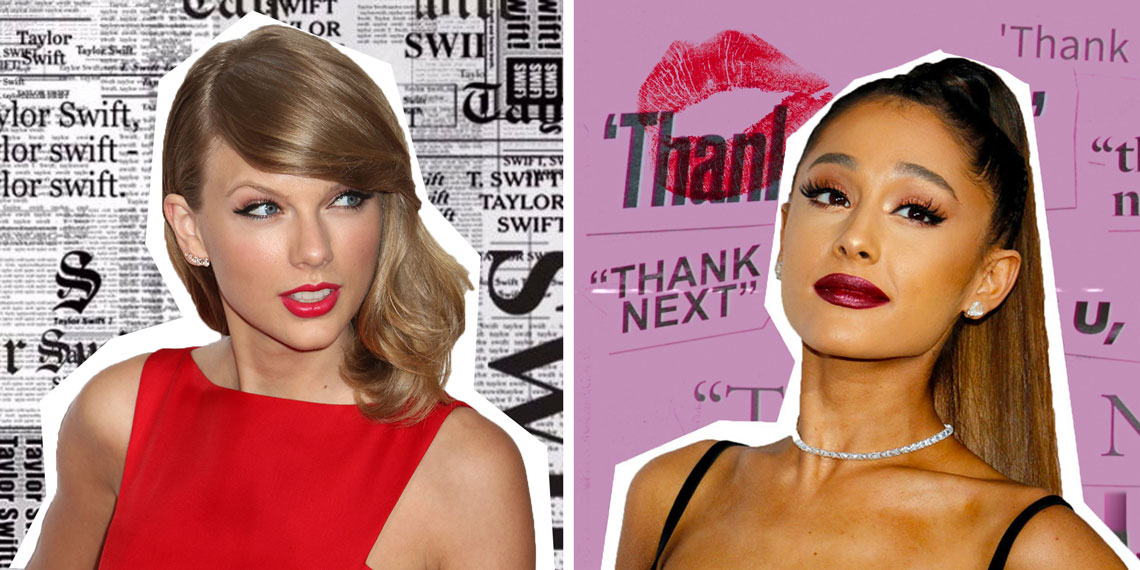 Why Is Ariana Grande Celebrated For Doing What Taylor Swift Is Mocked For?

Like most sentient Americans, I’ve spent the past few weeks in a world where Ariana Grande’s “thank u, next” is the only soundtrack. It’s passed well beyond the point of “great song!” and into the realm of “if I don’t get my daily fix, I will probably die.” I am certain I’m not alone in this, given that “thank u, next” has shattered multiple records in the streaming world. More importantly to me, the song and its accompanying video have secured Ariana Grande’s transition from pop star to icon, from whom every social media nugget and on-screen appearance are nothing short of gospel.

As I’ve watched (and wholeheartedly approved of) the reaction to “thank u, next,” one question continued to bug me. When Taylor Swift sings about her exes, she causes a similar flurry—but one filled with sneering, eye rolling, and the suggestion that she can’t be taken seriously as an artist for choosing such diary-like content. Then Grande releases a track in which each of her exes are called out by name, and she’s hailed as the ultimate badass for it. As someone who both genuinely loves Taylor Swift’s music and feels that 90-95% of songs should be about one’s exes, I couldn’t help but wonder: why is Grande celebrated for the very thing Swift is mocked for? I’ve outlined my theories below.

Let’s be honest—a huge part of the appeal of “thank u, next” is the fact that, given the option, we would all present ourselves like Grande did after a breakup. “Thank u, next” is perhaps the coolest emotion one can evoke when facing an ex—even more so if done with genuine gratitude and while looking insanely flawless. “Thank u, next” is a song we can all caption our pictures with while drunkenly “accidentally” tagging exes, and the worst thing that happens is you’ve been overly polite to someone who wasted a year of your life. You tag an ex in a pic captioned “got a long list of ex-lovers / they’ll tell you I’m insane,” and you’re not coming back from that so quickly. This brings me to my next point.

Taylor Swift, almost determinedly, does not put up a “cool girl” façade when she sings about her exes. She painfully scrutinizes where it went wrong, often down to the minute of their breakup. She lingers on their ultimate incompatibility, mourns for the good times, and explicitly details the extent to which both she and her ex will suffer for this loss. Swift is, in my opinion, a far more realistic version of what you look like after a breakup. Contrary to what Grande’s rom-com mash-up video would have you believe, most people do not soar from broken engagements feeling validated in all of their choices and loving themselves like never before. They come out feeling lost, broken, and all too likely to dwell on all the most unhelpful and unattractive things.

So, if Swift is ultimately more relatable, shouldn’t that mean more critical success? F*ck no! Please. Name the last time someone wanted an honest reflection of themselves, particularly if it’s unflattering. From the bathroom scale to the pop soundtrack of your life, you want to be fed beautiful lies. People yell at Swift for being vulnerable about her exes the same way you yell into the mirror the morning after drunk-dialing your own ex 12 times the night before. Swift isn’t critiqued in spite of being relatable; she’s attacked precisely because of it.

First and foremost, we have to acknowledge that Grande takes the high road with “thank u, next.” She betrays not one scrap of vitriol toward her exes, talks no sh*t about them or the relationship. She simply thanks them for their time, and reaffirms her commitment to herself. So, that alone is easier to get behind than one of Swift’s “remember those three minutes in 2004 when you said we would die together” tirades.

On top of that, there’s the fact that Grande seems to have no fear of confrontation (can’t relate). She names each of her exes plainly, and even gave many of them a heads-up before the song’s release. So, if her exes themselves don’t have an issue with the song, it’s a little harder for the general public to decry it.

Swift, on the other hand, does everything short of attaching a treasure map to each album with hints to which lyric refers to which ex-boyfriend. Yes, the national obsession with tracking those connections, and stalking her love life in general, has gotten totally out of hand. But when she describes the relationship down to the month (“Back to December”), memorable holiday (4th of July), eye color (too many to count) and so on—it’s a little hard not to engage. Add to that the fact that she decidedly doesn’t take her exes’ feelings into consideration on this—and given the contentious nature of many of her songs, it’s not hard to see why.

To clarify, I’m not in any way saying that artists should have to poll their exes before releasing a breakup track. The world would be a much sadder place if that were the case. I’m just saying that Swift’s refusal to do so—and Grande’s respective decorum toward exes—makes Swift the much easier target to criticize. Basically, Grande is doing all the things you’re supposed to do after a breakup; Swift is doing all the things you hope people never find out about after a breakup. And one of those girls will get dragged a lot harder than the other—it’s just a fact of life.

Moral of the story here? We should all try to be more like Ariana Grande. JK—you guys knew that coming in. But honestly, that is the hidden message behind the song’s unequivocal success. When Swift sings about her exes, she does it emotionally, vindictively, and evasively. She speaks about her exes with all the bitterness of someone still deeply invested in the relationship, or at least actively wounded by it. When Grande sings about her exes, she’s singing from the point of view of someone who’s moved on—and ultimately, just singing about herself. So yeah, do be more like Ariana Grande. Move on from relationships that didn’t work, stop emotionally investing, and celebrate yourself. Apparently, the world has a much harder time tearing that down.