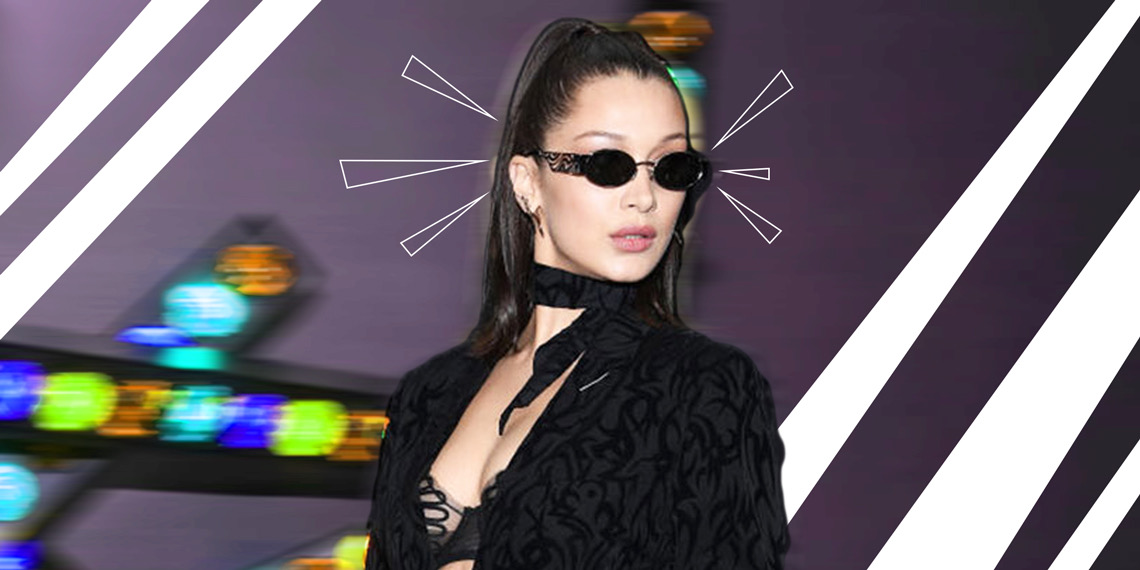 Why Are Tiny Sunglasses Everywhere All Of A Sudden?

Is anyone actually surprised that it was America’s own future presidential candidate, Kanye West, who first declared oversized sunglasses out, and tiny sunglasses in? According to an episode of KUWTK that aired earlier this year, Kim says that Kanye emailed her and told her that her signature oversize Kim K sunnies were out, and that tiny sunglasses were the new “it girl” accessory. And well,  as I sit here shopping for my own pair of Matrix-esque sunnies, I definitely can’t say Kanye was wrong. In fact, it kind of makes you wonder: which came first, the chicken or the egg? Did tiny sunnies only become a trend because the Kardashians and Jenners wore them? Or were they already becoming a trend so the Kardashians and Jenners wore them? Real brain teaser, I know.

Just look to any of your fav ‘90s Blockbusters (ugh, Blockbuster R.I.P) and you’ll quickly see exactly where and how the tiny sunglasses trend first originated. Our young adolescent selves first saw them in movies like The Matrix, Cruel Intentions and, probably the most iconic of them all, Billboard muther fuckin’ Dad. Like, have the Olsens ALWAYS been this cool? Fuck Kanye, I’m starting a campaign for those two to be president and VP.

So then what sparked the current revival of miniscule sunnies, which seem to be plaguing Urban Outfitters and Barneys alike, today? This ‘90s trend was re-ignited by none other than Demna Gvasalia, Balenciaga’s creative director, who presented a style of tiny shades during his Spring/Summer 2017 show, and then further promoted the trend during his Fall 2017 show.

Of course, it should come as no surprise then that “it girls” such as Rihanna, Bella Hadid, Selena Gomez, and Kendall Jenner all started wearing this trend last May. Yes, as in a full year ago. But, with all things fashion, this trend only recently trickled down to the masses and into your local mall, where you can now get your own pair for only $14 from Icing or wherever. I mean, at this point there’s no need to go blow money on a designer version of these trendy shades—you’re already too late to the trend, so investing in a nice pair would just be stupid. Like, by now the Kardashians are probs already back in their oversize shades with their oversize salads in their oversize clear bowls.

But, since I’m going to safely assume you’re not a celeb since you’re even reading this article (and if you are, then show me some love and hit this article with a retweet) then you might as well bandwagon onto the trend and get yourself a pair of these Insta-worthy sunnies. Pro tip: Wear them on the bridge of your nose to look effortlessly cool, and not like a try-hard, fashion inept loser. Like, don’t try to actually wear them as a means of UV protection. They’re a useless, yet stylish accessory.

Here are a few cheap styles of tiny sunglasses to shop, all inspired by the celebs who made them cool for you to wear in the first place.

This cat eye version of tiny sunnies is definitely my personal fav. This style is easily the most universally flattering and least ridiculous looking. These similar-looking versions won’t break the bank.

The rectangle style seems to be the go-to choice for the Kardashians and Jenners. This is the style that most resembles those iconic shades from the Matrix. Tiny rectangle shades are definitely the most edgy, and really give off a cool and mysterious vibe.

#BellaHadid out in Paris today.

This style of tiny shades is pretty much owned by Bella Hadid. Like, if Bella isn’t in the most miniature circle shades you’ve ever seen then you should definitely assume something is wrong. Maybe he ditched her weird ass for Selena again. I know I would.