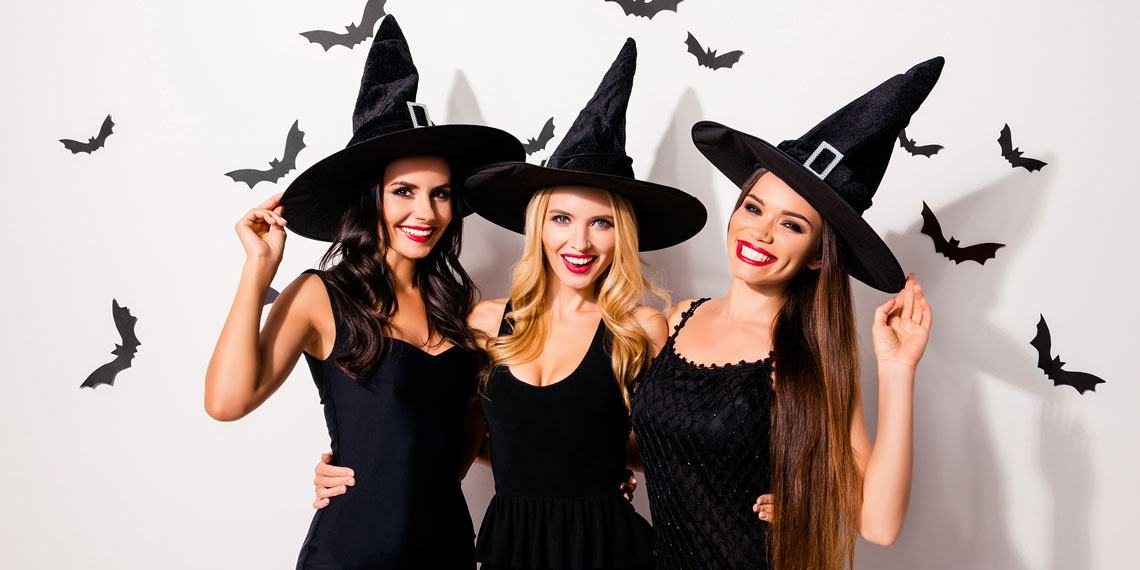 What Your Group Halloween Costume Says About Your Friends

In Girl World, Halloween is the one day a year where a girl can put literally no effort into a costume, but it still looks half decent if she can rope at least two of her friends to do a group Halloween costume.

It’s called the Cheerleader Effect, actually, and you may already be familiar with it. Well, technically, according to Wikipedia, it’s called the Group Attractiveness Effect, but whatever. It’s basically the cognitive bias that causes people to perceive a group to be hotter than individuals are. While this whole thing kind of sounds like bullsh*t to me, I will agree that it’s totally legit on Halloween. A costume that sucks for an individual might look like an actual costume if it’s a group costume. (“Say costume again.” “Costume.”) For example, wearing mouse ears and sunglasses and calling yourself a “blind mouse” is f*cking stupid. However, conning two of your non-creative friends to wear the same thing and calling yourselves “Three Blind Mice” is a legitimate Halloween move.

Literally Any Kind Of Alcohol

I mean, this one’s obvious. If you attended college, or even just followed girls who have attended college on Instagram, you’ve seen a million variations of DIY alcohol-inspired costumes. Whether it’s girls trying to create a skirt out of a Bud Light case or the slightly (like, very slightly) more resourceful Franiza box or bag, these costumes all say the same thing: you want everyone to know how much you booze. Girl groups who dress as alcohol for Halloween may not be the heaviest drinkers out there, but they’re definitely the ones who talk about drinking the most. They still drunk tweet in 2018. They have a finstagram past the age of 25. Although they’re always joking about how they’re eternally single, they always seem to be at a bachelorette party. “Party girls don’t get hurt” is their go-to Instagram caption or bio. You get the idea.

If you and your friends dress up as sexy Disney Princesses, you are the worst kind of people. I’m kidding. I’m not. I’m kidding. (I feel like I have to say that I am kidding, but I will let you, dear reader, decide for yourself.)

Anyway, Halloween costumes that consist of a glittery corset and a tutu are one kind of terrible, but making it Disney branded really brings it to another level. This group Halloween costume definitely had a moment in like, 2012, when we all discovered Pinterest and girls who were popular on Facebook and had really long, straight blond platinum hair and a closet full of VS Pink. Sexy Disney characters basically say “Here is a thing I really loved as a child, and coincidentally, here are my boobs.” It’s just… weird?

Mean Girls, Spice Girls, Or Any Other Go-To Girl Group

I’m never one to shoot down a Mean Girls reference. I mean, unless someone calls something fetch. Like, have you even seen the movie? I digress. But the problem with Mean Girls as a group Halloween costume is that it can look stale fast. If you realized that you and your two best friends have the perfect hair colors (Two blondes and a brunette? Congrats) to dress up as the Plastics and then wear some pink clothing, *Randy Jackson voice* it’s a no from me, dawg. If you go all the f*ck out as Janis Ian or Caroline Kraft, then yes, that’s amazing. Personally, I once accidentally dyed my hair black once, so I went as Cady’s “axe wife” costume. But like, I committed. I worse those nasty fake teeth ALL NIGHT. I guess the point of this rant is: a tank top with two tit holes does not a Regina George make!

The same goes for the Spice Girls, although this costume is significantly more difficult to pull off because it requires you to have a redheaded friend, which are just harder to find statistically. Clueless is another one that’s making the ranks in cliche group costumes, given the fact that every fast fashion store is selling plaid pleated skirts right now.

Sports bra. Spandex shorts. Braids. Silk robe that makes everyone question whether you’re actually trying to be a Victoria’s Secret Angel. These are the markings of someone who has completed the Kayla Itsines Bikini Body Guide at least once. Of course, there’s no shade behind that statement; I can’t wait until I can finally make it past week one so that I, too, can someday be a boxer or some other ambiguous athlete costume for Halloween.

A Costume Where You Just Write Stuff On Shirts

These costumes tend to vary by year, but the most quintessential of them all is definitely “Netflix and Chill.” Obviously, there are different levels of offenders here. Some just straight-up write “Netflix” on a T-shirt in Sharpie, some print out the logo and tape it on the front. Either way, it’s a stupid costume, and you can and should do better. Like, have some decency and throw on some cat ears or something.

If you’re really going to be lazy, at least be cute. There’s a whole collection of just shirts that say stuff on them that you can wear on Halloween on Shop Betches. You’re welcome.