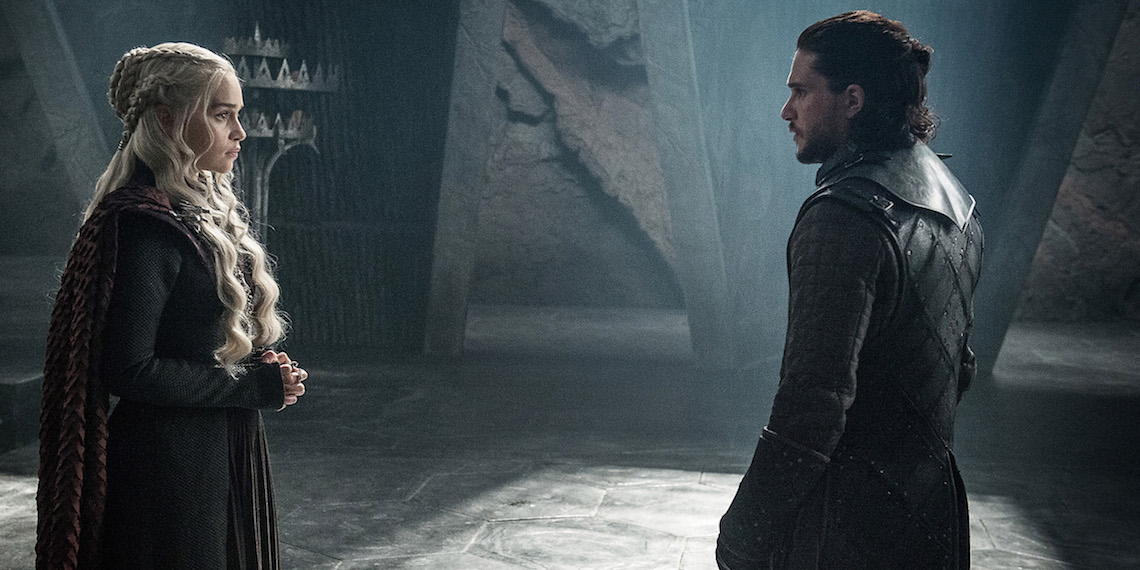 1. The countdown to the premiere of the final season *muffled sobs* on April 14th
2. The inception of hundreds of thousands of fan theories about what every single second of this 1:44 video means.
3. My very own stress dreams about this show ending.

Reddit has not slept since Sunday night. The footage of Jon, Sansa, and Arya slowly walking through the Winterfell crypts as dialogue from seasons past plays eerily overhead has taken the GOT world by storm.

To be fair, we’ve been starved for the past year and a half and would have taken literally anything at this point. Like, the trailer could have just been Tyrion drinking an entire carafe of wine and we all would have collectively lost our minds. I, for one, was reduced to vigorously following Nick Jonas and Priyanka Chopra’s wedding celebrations just for a glimpse of Sansa Sophie Turner. Alas, there were no clues to the show but like, wow. Good for Sansa.

So what can this trailer tell us, other than the fact that we’ve all got far too much time on our hands? A few notable things, actually.

Bran Can’t Sit With Us

As the Starks reach the end of the crypts, they’re greeted by three statues—of themselves. This in itself is sketchy as hell, because that means they’re dead. But considering the fact that the season six trailer featured the lifeless faces of many characters, both living and dead, I’m not as concerned about that.

The battle currently raging in every comments section on the internet is about the fact that Jon looks like an older version of himself in his statue, while Sansa and Arya look like their present-day selves. Personally, I chalked that up to poor craftsmanship more than any kind of prophecy, but I’m not an expert on stone masonry, I guess.

The Dialogue Is All About Jon

As each character walks by the crypt of a dead family member, we hear dialogue they’ve spoken in previous seasons. It is, of course, all about Jon. What else is new?

From Lyanna we hear, “You have to protect him,” which was the oath she made Ned swear from her deathbed at the Tower of Joy. So it sounds like Jon is going to finally find out who he is, which will make that entire boat journey’s worth of sex with his hot aunt a little uncomfortable, I’d imagine.

From Catelyn we hear, “All this horror that has come to my family, it’s all because I couldn’t love a motherless child.” To be fair, the Starks were doomed, regardless of Catelyn being a raging bitch to Jon. But a little kindness probably wouldn’t have made matters worse or anything.

From Ned we hear, “You are a Stark. You might not have my name, but you have my blood.” Thanks to Bran’s flashback at the end of last season, we have official confirmation that Jon is, in fact, a Stark, just not the way he’d always been told. The fact that Jon was the one to walk by Ned’s statue as this was spoken only serves to further highlight the similarities between them, i.e. f*cking up a lot of stuff because, you know, HONOR.

There are surely more Easter eggs to be uncovered over the next four months, and we’d love to hear yours. Leave any theories in the comments so we can geek out together. See you soon, my friends. Recaps are coming.