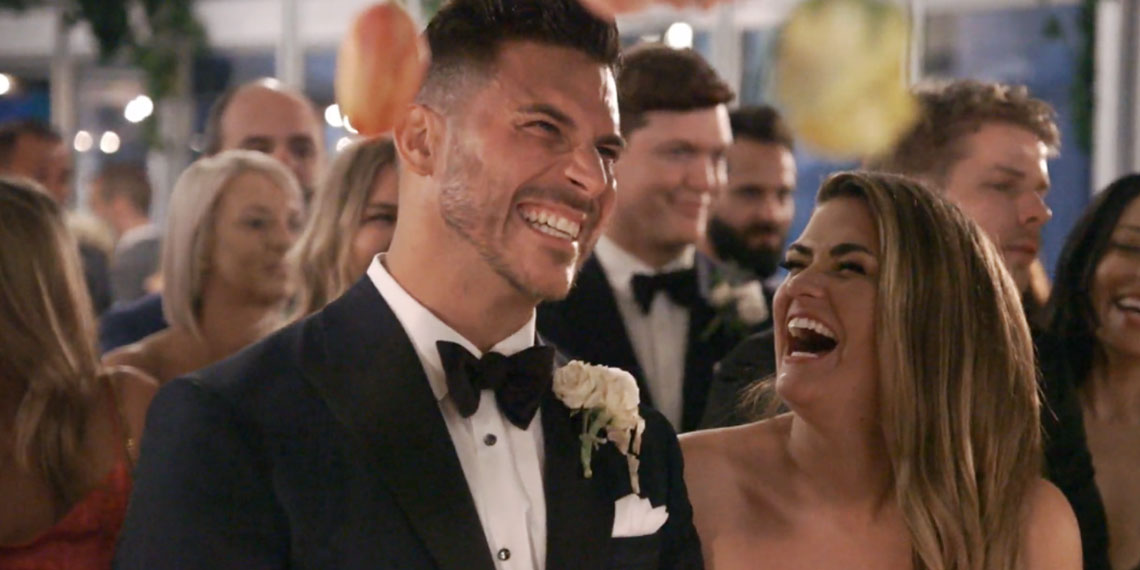 ‘Vanderpump Rules’ Recap: What A Shame The Poor Bride’s Groom Is A Sociopath

I never thought I’d say this—truly, never thought I’d say this—but thank god for Vanderpump Rules. We are living in an actual waking nightmare (as in, when I woke up this morning I thought to myself: I want to sleep more because it’s the only place that isn’t terrifying, unlike reality), and maybe the only thing that will get me through is criticizing Jax and Brittany as if it matters. As if any of it matters anymore. As if it makes a difference whether or not Max is a f*ckboy (he is), whether or not Scheana is desperate (sorry, but it’s true), whether or not Giggy has been secretly dead and taxidermied this whole time (he has, we all know it).

This week, it seems like we may, at the very least, get one form of relief we’ve been begging for: Jax and Brittany’s wedding episode. This has been half a season’s worth of buildup that nobody cares about, so what’s the worst that can happen? Oh right, I throw my computer out the window.

Jax wakes up the morning of his wedding, extremely hungover, which is literally the last way I would want to spend my wedding. Jax is like, “it’s like my body knows how much I spent on this wedding and is working overtime” which is a weird way of saying “this Adderall I railed is working overtime.” But hey, we all have our things!

Schwartz, who has correctly used the word “cacophany” before, does not think “dawdle” is a word. The man never ceases to amaze me.

It’s like, six in the morning, and Kristen is already on the verge of tears because Carter full-on showed up at the hotel he was not staying at. Kristen literally acts like she and Carter are these star-crossed lovers with a timeless love story for the ages because she’s so sad they didn’t work out. Like, ok Juliet. You are an emotionally unstable baby deer and he is a walking beard with Chiclet teeth. Shakespeare would not even waste a sonnet on y’all. It. Is. Not. That. Serious.

Randall, who is supposed to be the groomsman Jax always wanted, is still in bed with Beau pillow-talking like two 12-year-olds at a sleepover. I’m now seeing why he’s dating a 28-year-old. As my dad always says: age is temporary, immaturity lasts forever.

It’s so hot outside that Sandoval is handing out umbrellas to unsuspecting, frying guests. Who could have predicted that for a wedding in the middle of Kentucky in the summer? Oh right, all of us.

Jax walks down the aisle with his godmother, holding his dad’s urn. Brittany is wearing a corset mermaid dress that I did not expect. Yeah, yeah, I saw the People magazine photos months ago, but it doesn’t make sense that for someone who talks so much sh*t about loving princesses, she didn’t go for a princess style gown! Yeah, she looks amazing, but I’m specifically taking issue with the conflict in personal branding. Look, pettiness is all I have at this point.

As Brittany walks around the aisle, Scheana whispers to Ariana, “flowers down, tits out.” Spoken like every girl at the festival formerly known as Coachella.

I’m not surprised at all Jax and Brittany’s vows centered around Friends, since it’s not like they have a personality.

Surprisng no one, least of all me, Schwartz “almost loses” the rings. For my own sanity, I’m going to go ahead and believe that the producers put him up to that and it wasn’t real. I really just have to, otherwise I will sink into a depression.

Now, do we think that Brittany is going to change her last name to Taylor? Or Cauchi? Or just leave it as Cartwright? Lance Bass announces them as Brittany and Jax Taylor, which doesn’t feel wrong but it also doesn’t feel quite right. Well, at least her IG handle is @brittany so she doesn’t have to change that. In any case, as Brittany yells, she and Jax are MAAARRIIEEDDD. TG that’s over with.

Back in LA, Charli says her dream is to get wasted and get married at a Vegas drive-thru one night. And it’s like, girl, if that’s your dream, we can make that happen very easily. I would say dream big, but what do I expect from a girl who doesn’t eat avocados?

At this time, we learn that Danica got a DUI and her biggest takeaway from the ordeal is that having to blow in a breathalyzer is “embarrassing.” I guess I’d be frustrated if I had to use a breathalyzer every 15 minutes in LA traffic, because that would mean I’d have to blow into it every 2 feet. But still, like, you could have killed someone. That’s a little stronger than “embarrassing.”

Meanwhile, Dayna thinks she f*cked up by dumping Max. Apparently she thought Max went to a fancy restaurant with his ex, when they were really at a sh*tty grab-and-go type place. Did he also meet her for smoothies? What is with these LA dudes and smoothie dates? This is why I can’t move to LA, for all those who are asking (my dad).

Danica points out (with illustrative cartoons that were totally unnecessary, do less, Bravo editors) that it doesn’t really matter that Max and his ex were at a fast-casual restaurant, they were still together and that’s the point. Dayna intends to get back with Max, causing me to let out an audible groan in my apartment. My roommate, who is next to me on the couch, did not flinch. I don’t know what that says about me, but thought I would share.

Back at the wedding, Carter is salty af that he’s not sitting with Kristen. Then he says, “if I wind up in Kristen’s bed, it happens,” and I reach through the TV and slap him in his baby-sized mouth.

Schwartz gives the longest speech in the history of man. Children have grown up and gone to college. Empires have risen and fallen. All while Schwartz was giving this incoherent speech nobody asked for.

Kristen, looking disheveled, stumbles over to Carter to talk about their relationship. I think my problem with Carter is not that he has baby teeth, but that only his bottom teeth are visible at any given moment. He’s kind of like a bulldog in that respect, but not as cute.

I’m getting major Gigi and Damian vibes from these two wasted “us against the world”-ass bitches. I definitely get the FOMO of seeing all your friends getting their happy endings while you’re still bitterly subtweeting the guys who ghost you (ok, so maybe that’s just a me thing), but has Kristen never heard of the sunk cost fallacy? The solution is to date a non-jackass, not to give the same jackass even more of your time and energy. Geez.

Kristen is ready to kill a bitch for the bouquet, while Brittany is purposely aiming for Stassi. Feel like that sums up Kristen’s role on this show pretty accurately. Thankfully, Brittany’s 18-year-old cousin caught the bouquet.

Back in LA, James is going to a friend’s party in the Hills, claiming he’s not going to drink since he’s driving. As if that’s ever stopped anyone. (@Danica)

Charli is surprised that Dayna isn’t at the wedding. Does she even know Jax and Brittany? Charli is such a weirdo, but like, a lovable weirdo. I’m excited to see what happens with her.

Hell yea Scheana! She’s making out with some random bald dude at the end of the night. Good for you, sis. Good for you.

After the wedding, it becomes a cash bar, and Jax goes into… I’d say… a half coke rage. Not a full rage. Ok, no, I lied—it’s a full rage. This is reminiscent of the time he went into SUR and flipped everyone off. The reason? Jax had cases of vodka at the other bar that nobody brought in, and now they’re charging people. Sandoval goes into full bartender mode and does the heroic deed of…. Carrying a couple of boxes of vodka over. Not all heroes wear capes.

Oh wow. In their drunken stupor, Brittany says to Jax “we’re married!” and Jax immediately says “big old titties. I love them. Uh, I mean I love them. …I love you!” There ya go, buddy. You love the woman attached to the tits. You do, don’t you?

Me, thinking about this:

The next morning, I guess the coke is still coursing through Jax’s veins, because he’s still raging about potentially being charged late checkout fees. Brittany, with the correct response, can only manage a hungover shrug.

In LA, Dayna pulls Max aside to explain the whole JonesGate thing, which to be honest, I don’t feel has the same weight she’s ascribing it. I’m with Danica on this one—he was still being shady even if he didn’t take his ex out to a fancy dinner. Ouchhhh and Dayna gets rejected by Max, in not so many words. Ya hate to see it. But just like there’s no crying in baseball, there’s no crying over f*ckboys. I won’t allow it.

See you all next week, provided we’re still alive!