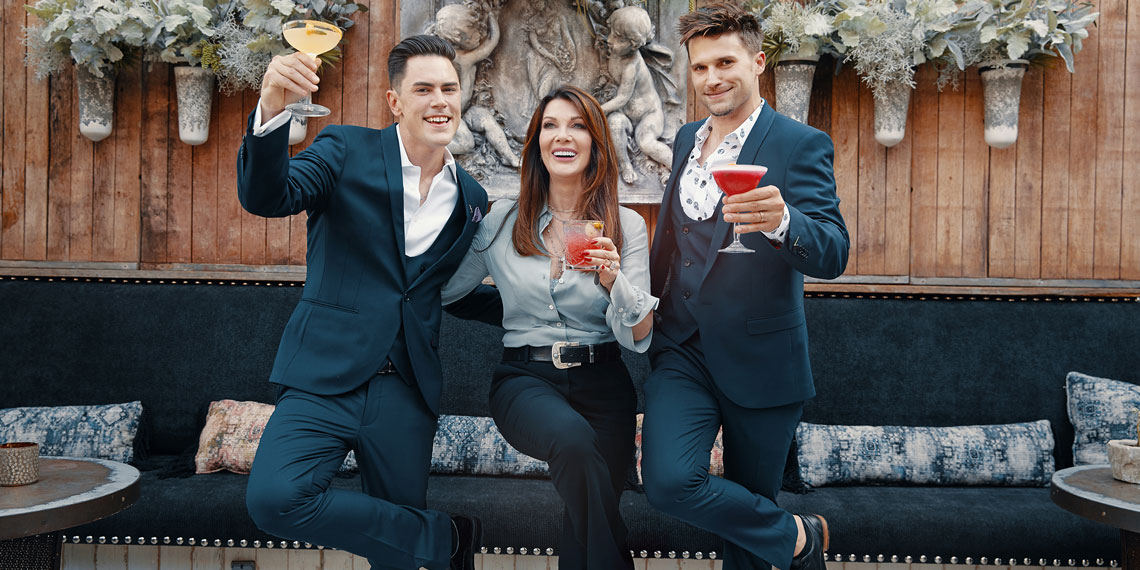 We attended the opening of Tom Tom, Lisa Vanderpump’s newest restaurant, and got the chance to chat with her and both Toms about what we can expect (and if that includes a spin-off). Read on for the tea!

We watched all last season of Vanderpump Rules as Lisa Vanderpump gave Tom Sandoval and Tom Schwartz the opportunity of a lifetime by partnering with them to open their own bar, Tom Tom. We got an exclusive chance to visit Tom Tom before it opens tonight and we chatted with Lisa, Tom, and Tom about all things Tom Tom. (Say “Tom” again.) We also tried to get to the bottom of a pressing question—what exactly does Schwartz do?

Nestled in the heart of West Hollywood, Tom Tom boasts a delectable food menu, a chic design aesthetic and a delicious list of signature cocktails. Nick Alain designed the sleek venue with the culinary offerings created by Chef Penny Davidi, in collaboration with LVP.

Lisa credits the cocktail list to the Toms working with “one of the best mixologists in America, Sly Cosmopolous.” Lisa didn’t want people popping in for a basic cocktail, “like a vodka soda” (ouch, but we get it). Instead she suggests her favorite libation, the “Clockwork Pink.” The drink features mezcal, fresh lemon, prickly pear, agave, habanero shrub, and jalapeño. She also loves the absinthe drink on the list—black out beware!

When asked what exactly Tom Schwartz does, Lisa giggled and then shed some light on his role in Tom Tom. “That’s a good question—he pulled up tonight in a white motorcycle and white suit so that’s pretty good. I was pretty impressed with that,” she offers. “I have never met one person who doesn’t like Schwartz,” she continues. “He brings the feel-good factor to the place. He is a meeter and greeter and he will get wasted with you,” she says with a laugh. The host with the most paired with an opportunity to brown out with Schwartz? We’re are on board.

Chef Penny Davidi—the “culinary curator” behind Tom Tom—describes Lisa Vanderpump as “very creative, very talented” and says she has “great ideas” when it came to creating the menu. When pressed about Schwartz’s role, Penny laughs and says, “Tom Schwartz is really sweet and really loving. And he comes up and thanks me all the time in the kitchen—which is great.” So we may never know the truth, but Schwartz does do meets and greets the chef—how sweet.

When we finally caught up with Tom and Tom, we had to get to the bottom of some things. Schwartz conceded that Sandoval was in fact the first Tom in the name of the new venue. “For a brief time, I had the crown. I relinquished it—it’s too much pressure,” an exasperated Schwartz offered. “Heavy is the head who wears the crown. I don’t want that much responsibility. I am very comfortable being Tom number 2—Sandoval is number1,” he continued.

Schwartz, who corroborated the rumors of a Tom Tom TV show spin-off, stated they know nothing about an actual spin-off. Sandoval said, “we are not being coy. If that did happen, we would fully embrace it. Tom Tom would be a great place to have that,” he shared.

In the meantime, the Toms have a bar to run. The have declared they will not be doing Fireball shots before each meeting (sad face), they will be featuring weekly cocktail specials (but no Scorpion cocktail on the list yet), and Schwartz welcomes the opportunity to black out with people who pop by Tom Tom when it is open to the public (aka us).

Paul Zahn is an on air host, writer and entertaining expert. He has appeared on E! News, Celebrity Page TV and many regional broadcast outlets. He likes long walks on the beach and rum cocktails.