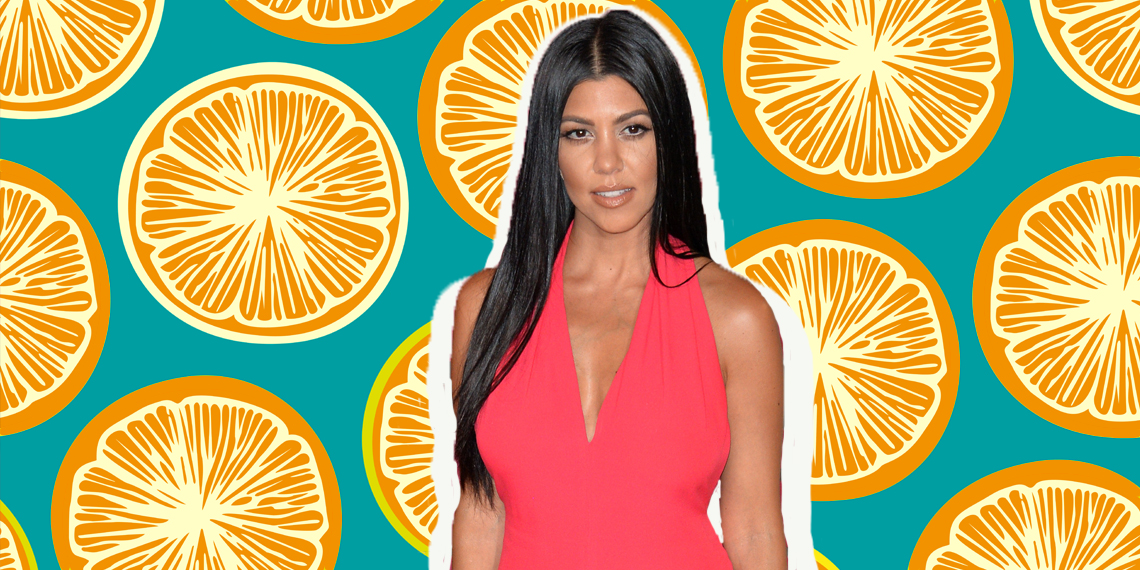 This Is What Kourtney Kardashian Eats In A Day

It is a truth universally acknowledged by anyone with eyes that Kourtney Kardashian is a 38-year-old mother of three with a BANGING body. It’s equal parts inspiring and rage-inducing to know that this woman looks better in her late thirties than I did in my prime college years before the alcohol abuse and limitless access to carbs took their toll. RIP 21-year-old body. I hardly knew, ye.

Luckily for us commoners, Kourtney released her daily meal plan on her app and, as per usual, we have a lot to say. First of all, the woman loves a tasteless pudding. But she also loves bikinis and looking like a damn snack, so I guess the two go hand in hand.

We broke the diet down for you in case you decide to eat like a Kardashian for a day. Pro-tip: if it’s excessively expensive and tastes like raw sewage, it will keep you young forever.

First thing in the morning: “Every morning, when I wake up, I take collagen supplements on an empty stomach. About 20 minutes after the collagen, I usually drink one tablespoon of organic apple cider vinegar mixed into a glass of water. Both of these habits have a ton of health benefits that affect everything from your skin to the way your body processes nutrients.”

From my brief experience with prenatal vitamins in high school, I can tell you with the utmost certainty that supplements on an empty stomach are a terrible idea. But if it means I look like Kourtney at 38, I guess it’s something I’d be willing to try.

The tablespoon of apple cider vinegar sounds gross but my mother and her iron immune system swear by it, which basically makes me a distant Kardashian relative I guess.

Before Breakfast: “Before breakfast, I take a vegan probiotic shot. Then, almost every morning, I eat freshly made avocado pudding with E3Live blue-green algae, bone broth protein powder and MCT oil. It only takes a few minutes to make and it provides healthy fats to give me energy before a workout.”

I can’t even fathom what a vegan probiotic shot tastes like, but I would be willing to bet it’s something akin to frothy, grassy, garbage. I’m sure I can buy one at my local New Seasons for the low, low cost of $9 and a painful morning spent in the shared office bathroom.

The avocado pudding concoction sounds like Kourtney threw a couple darts at a board covered in health food buzzwords and then poured them all in her Vitamix. I’m sure it tastes like saw dust and makes her skin glow like a newborn baby. But just for fun, let’s break it down:

Altogether, this sounds like an incredibly expensive, tasteless pudding and I’m going out tomorrow to buy all the ingredients for it because have you SEEN Kourtney? The woman knows what she’s doing.

Breakfast: “After exercising—which I try to do 5-6 times a week in the morning—I usually have a bowl of whole grain oatmeal made on the stove (instant isn’t as good for you!). I’ll add fruits, sprinkle seeds or bee pollen, or drizzle honey on top to mix it up.”

Lunch: “I love salads, so I usually have one for lunch every day with some type of protein added, like chicken or salmon. Whenever possible, I try to make my own simple balsamic or ginger dressing since store-bought dressings have lots of unnecessary sugar and preservatives.”

We’ve already put ample research time into what exactly is up with the Kardashians’ go-to salads and, spoiler alert, they’re just salads. Not even a nice seared ahi story. It’s a chef salad.

Afternoon Snack: “If I’m hungry in the afternoon, I’ll have fresh vegetables with avocado hummus, raw almonds or a bit of fresh fruit. I also usually drink hot green tea right after lunch.”

When I’m hungry in the afternoon I have to physically restrain myself from diving face first into a bag of Flaming Hot Cheetos, but to each their own.

Pre-Dinner Snack: “In the evening, before dinner, I do another round of apple cider vinegar mixed with water, then another probiotic shot.”

This isn’t a snack, Kourtney. A glass of vinegar water and a probiotic shot can range anywhere from a cleanse to an actual punishment (same thing tbh), but not a snack.

Dinner: “I love fresh, simple soups made with asparagus, sweet potatoes or beets. I also make turkey chili when it’s cold outside. I usually try to make soups and chili on a Sunday, so I have the extras in the fridge when I’m busy during the week.”

I have a sneaking suspicion that the six bowls of chili doused in cheese and sour cream that I’ll be consuming at this weekend’s Super Bowl party will vary slightly from the turkey chili Kourtney makes on brisk Sunday nights. At the very least, I know that mine will have 100% less blue-green algae in it.

Sweet Snack: “Even though I eat healthy most of the time, I think it’s really important to have something sweet—especially when it’s worth it, like Chef K’s matcha chia seed pudding.”

I bet Chef K’s matcha chia seed pudding is decadent compared to Kourtney’s morning concoction, but I doubt it would land anywhere in the realm of dessert where the rest of us are concerned. Then again, no part of Kourtney’s daily routine would register anywhere near normal for the rest of us, so this shouldn’t be all that much of a surprise.

TL;DR: you are not Kourtney Kardashian. Don’t bother.