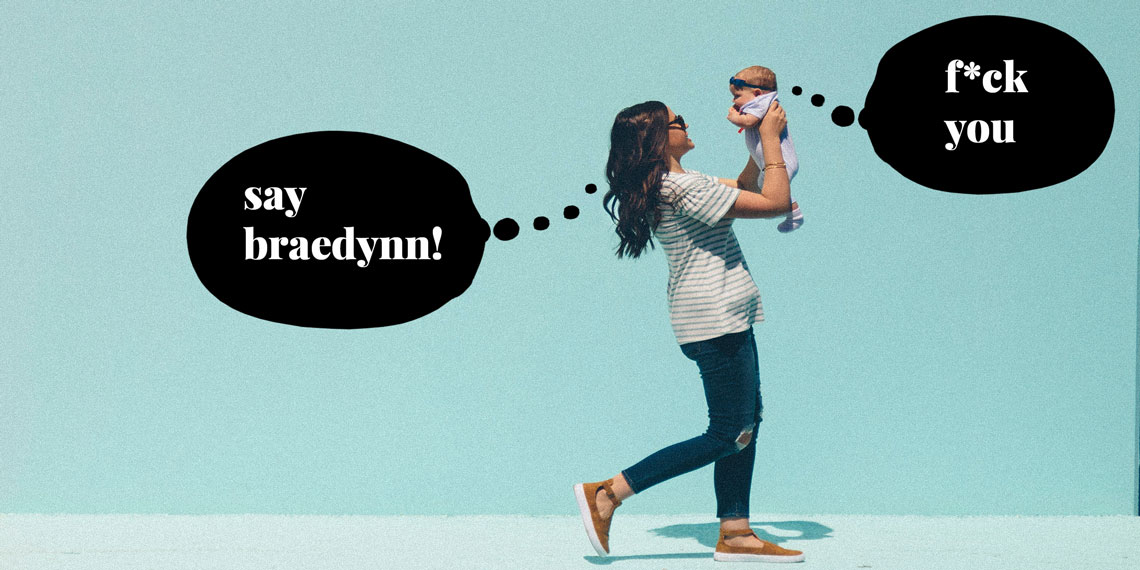 The Worst Baby Names Of 2018 That Should Be A Crime

Naming another human being is a huge responsibility. From the second you sign that newborn’s name on its birth certificate, you are deciding their fate. So don’t f*ck it up. Have you ever met an attractive guy on Hinge named Clarence? Or a popular girl in high school named Dorian? I rest my case. Frankly, most names on Baby Center’s “Most Popular Baby Names of 2018” article (from which I based this article) are fairly normal, if overdone: Emma, Olivia, Liam, and Noah all made the cut. But I’ve compiled a list of the weirdest and worst baby names that somehow made it onto the list and left us all wondering, “who the f*ck let them name their kid that?”

Yeah, celebs are notorious for naming their kids obscure things, but even without a few million dollars to your name and  being verified on Instagram, you can still commit some heinous crimes against your child by giving them a name that will cause them to be mocked for their entire adolescence. Cut your future kid, and society as a whole, some slack and don’t name them any of these terrible baby names on this list.

I’m sorry, but if you didn’t just give birth to an 80-year-old woman who plays bridge and drinks lemon and hot water, you should not name your child this. WTF did that child do to deserve this name?

Sleeping Beauty, is that you? To be honest, the only problem I have with this name is that it’s also the name of a Disney princess from 1959. If you want your daughter to get pricked by a spindle and lay lifeless until a man comes and rescues her, maybe you should invest in a copy of Chimamanda Adichie’s We Should All Be Feminist and reconsider starting a family just yet.

Nova means “A star that suddenly becomes thousands of times brighter then gradually fades to its original intensity.” So if you are saying your child peaked when they were born and will just go downhill from there, then go right ahead. It also refers to a type of smoked salmon, which is infinitely worse. But I suggest, instead of setting your kid up for failure, invest in some birth control and study this list of the worst baby names before having a child.

Is this because your child was conceived in the capital of Niger? If you didn’t even know where Niamey is (like me, thanks Google), then scratch this name off your list pronto. This isn’t the same as naming your kid Paris after you and your bae got piss drunk on your last vacay and forgot a condom. But like, don’t do that either because that is also very cringeworthy.

Let’s be real, Mason is definitely not the worst name on this list. But I can’t help but think that the people naming their children Mason are either Kardashian superfans or hippies living out of their vans. You might as well just name your kid after your favorite vegetable while you’re at it (@gwenythpaltrow)—Mason Kale has a nice ring to it.

Sebastian the Crab. Some say he is the hero of The Little Mermaid, I say he’s annoying, but potayto, potahto. Like Nora, Sebastian is one of those names that I have trouble picturing as a baby but have no problem imagining in an old age home playing cards. Then again, babies and an old men are basically the same thing, since they both wear diapers and need lots of attention. So congrats on the birth of your octogenarian!

Why? Just why. This is why non-white people make fun of us. No list of the worst baby names of 2018 would be complete without a weird af spelling for what is otherwise a very typical name. You know what’s worse than naming your child an absurd name? Naming your child a normal name but spelling it like an asshole. Is the X really necessary? I hope you are happy with people spelling your child’s name wrong for the rest of their life, all thanks to you. Good luck sleeping at night.

Mateo is the Spanish spelling of Matthew. So if you are Latino, then like, I can’t really be mad about the spelling of this one. But if you’re not a native Spanish speaker (I will also accept Italian), then, like the name Jaxon, your kid is going to deal with misspelled Starbucks cups his entire life. Just saying.