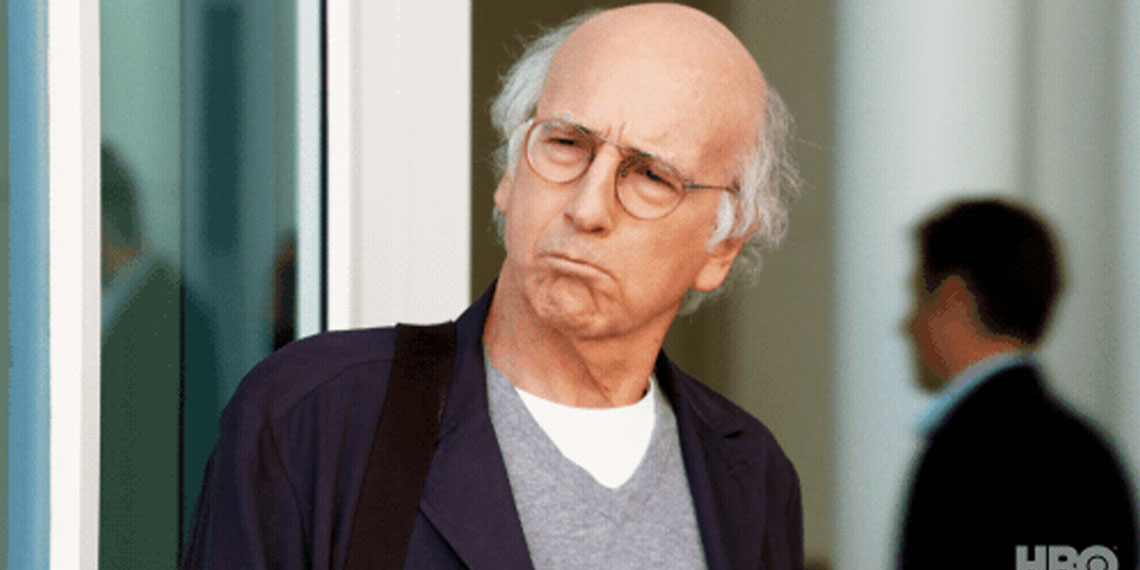 As we’ve already discussed, Larry David is a huge betch. He does whatever he wants and gives zero f*cks about offending people everyone. As Larry goes out into the world and has no idea how to conform to the norms of society, we can very much identify. Watching him go through life without so much as a clue how to navigate, we can’t help but picture ourselves in his (squeaking) shoes and think we’d react exactly the same. So in honor of Curb Your Enthusiasm having premiered 18 years ago today, we have gathered a top 10 list of our favorite Curb episodes, which btw was an excruciating task. We don’t expect you to fully agree with our list, but we hope you respect it like LD respects wood.

As any seasoned Curb watcher knows, Larry is set on his own “unwritten rules” of society. However, sometimes he is forced to choose between what he knows is morally right and whatever tf his heart desires. In this instant classic, Larry becomes enamored with the chicken at a Palestinian restaurant despite its outward hostility to Jews. Not only that, he ends up f*cking one of the Palestinian women at the restaurant whose dirty talk is actually just anti-Semitism mixed with moaning. It’s basically Curb’s take on the Palestinian-Israeli conflict but obviously what’s being fought for here is chicken.

Leave it to LD to help us pretend to know about sports. In a typically MASSIVE f*ck up, he accidentally trips and injures Shaquille O’Neal at a Lakers game, making him an even bigger social pariah than he already is. However, Larry gets away with this, as Shaq just so happens to be a huge Seinfeld fan…literally, huge.

Like people who still say “on fleek”, Larry is severely out of touch with reality. Cut to, Larry decides a great gift to give Ted Danson is a coffee table book called “Mondo Freaks” which features people with all kinds of disabilities. Throughout the episode he shows it to (and severely offends) a limo driver, tennis star John McEnroe and…wait for it… Heather Mills. This episode is Larry in all his glory because the greatest Curb fiascos arise when he actually has good intentions without realizing how abhorrent he is, and Larry genuinely believed giving someone “a book of freaks” is a thoughtful and generous gift.

Larry realizes the weatherman is falsely predicting rain the day before he plans to play golf so he can have the course to himself. Larry, being a man of principle who also appreciates a nice tan, decides he is not going to let this bastard get away with it and talks sh*t about the weatherman to everyone. Also in this episode, Larry throws out his back because he pees sitting down and gets kicked out of Jeff and Suzy’s house because Sammy finds a picture of his mouth. Poor Lah, all he did was try and get treatment for his plaque problem.

When Oscar the dog is on his deathbed, Suzy sends Jeff and Larry to go get his favorite meal, a cup of Pinkberry. One thing leads to another, and Jeff and LD end up eating his Pinkberry. They lie through their teeth about the incident, however, they were caught in the act by their friend who happens to be taking a vow of silence. Obviously the stage for a Larry-Suzy showdown has been set, which are Curb’s most glorious moments. Lahhrry you bawld four eyed f*ck!!!

First of all, this episode is great because it features Wanda Sykes, whose exchanges with Larry are some of the most hysterical. Larry is having a conversation with Wanda’s fiancé, rapper Krazee-Eyez Killa, about going down on b*tches. Krazee-Eyez admits to thoroughly enjoying the deed, so much so that he has been performing it on a variety of women, not exclusive to Wanda. Of course Larry lets the secret slip to Cheryl, and Larry once again finds himself at the epicenter of everyone’s hatred. A highlight of the episode is Larry offering some constructive criticism to Krazee-Eyez on how to improve some of his rap lyrics: “Change mother f*cker to b*tch? B*tch is a word that you would use to someone you disrespect.” Betch, however, is not.

Like any true betch, Larry knows how to manipulate people to get what he wants. In this case what he wants is Yankees tickets, and the person he’s manipulating is an orthodox rabbi. Natch, Larry pretends to be Ortho himself (“Not on the Shabbos!”) and by the end of the episode he ends up trapped on a ski lift with the rabbi’s daughter at sundown, eating edible underwear. Best line: “I’d have to be a SOCIOPATH to hit someone’s car and then go off into the night as if nothing had happened!!”

Larry goes to a friend’s house, a lady whose husband, Chet, recently died. Larry notices a framed picture of Chet and cannot get over how much he loves the shirt he’s wearing. Obviously Larry, being his usual self, won’t stop asking her where he got that shirt because even though she’s on the brink of tears, Larry is convinced “I would look great in that shirt.” When he finally gets the answer, he immediately buys the shirt and wears it to a meeting with Funkhauser who tells Larry he loves the shirt. Because Larry is such a nice guy, he goes back to the store to buy one for Funk and also buys another one for himself, ya know in case something happens to one. You can see where this is going… You honestly have to just go rewatch this episode to see the end because it is truly one of LD’s shining moments. Besides, that was a sharp f*cking shirt.

Larry is struggling to get to a Dodger’s game but of course he’s got sh*t to deal with beforehand. This includes getting out of jury duty, driving someone to the airport, and finding some medical ganj for his dad’s glaucoma. This episode is obviously a favorite for the gem of a scene that is Larry’s dad smoking a joint with the hooker and repeating after her, “this joint is the shiznick…meshuguna!” Larry also has a 10 minute conversation with himself in a reflective surface. Get a colonoscopy!!!

When you hear the word survivor, what do you associate with it? That question is thoroughly debated in this notorious episode. Larry brings his old-ass dad, who is a Holocaust survivor, to a dinner party where he has been told there is going to be another survivor there. Cut to, a contestant on the reality show Survivor who thinks having to be filmed on an island without snacks is just as brutal as the concentration camps. If you have a friend who’s never seen Curb, start them with this one. Unless they are in fact a survivor, then they might be offended.