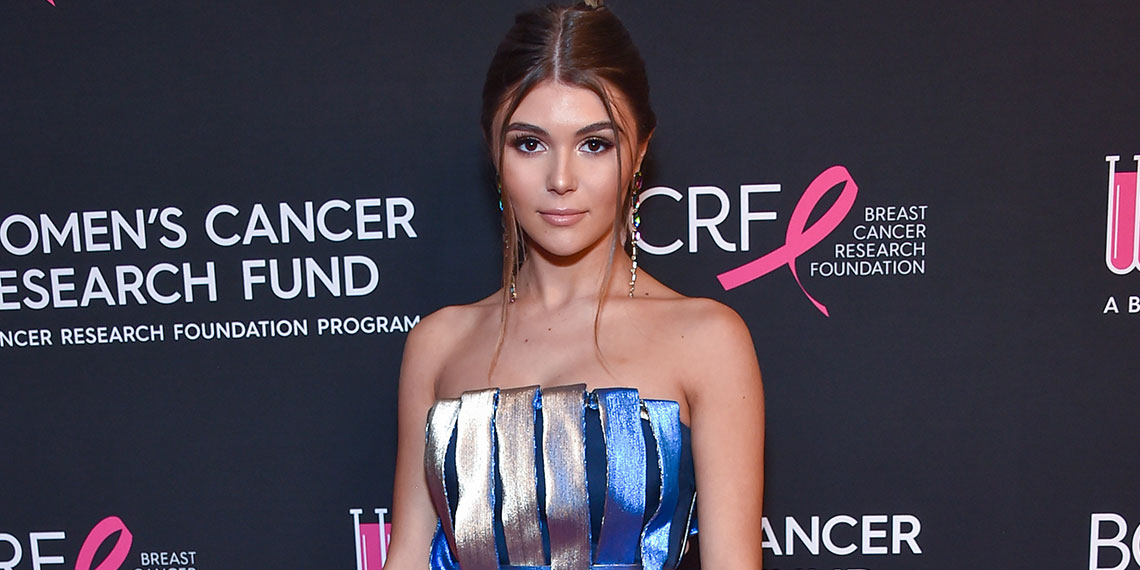 If you had told me two years ago that I would be eagerly awaiting an episode of a show on Facebook Watch, I would not have believed you. But Jada Pinkett Smith and the Red Table Talk crew have done it once again, announcing earlier this week that Olivia Jade Giannuli, the celeb daughter-turned-influencer who gained notoriety after her parents bought her way into USC, would be coming to the Red Table. This might be the most exciting episode since the infamous Jordyn Woods interview, and obviously, I had to watch right away.

A little background, in case you’re somehow not already obsessed with Olivia Jade. When the college admissions scandal was uncovered in the spring of 2019, one of the highest-profile people involved was Full House star Lori Loughlin. She and her husband, designer Mossimo Giannuli, paid half a million dollars to get their daughters into USC by pretending that the girls were being recruited to the school’s rowing team. After ultimately pleading guilty earlier this year, Loughlin was sentenced to two months in prison, and Mossimo was sentenced to five months. Both are currently serving their sentences, which apparently makes this the perfect time for Olivia Jade to break her silence. Here are the highlights of what we learned from Olivia Jade’s appearance on Red Table Talk.

Adrienne Really Didn’t Want Her There

Before Olivia came to the table, the episode opened with a discussion between Jada, her daughter Willow, and her mother Adrienne. Adrienne shared that she was not in favor of bringing Olivia Jade on the show, saying that she “found it really ironic that she chose three Black women to reach out to for her redemption story.” She added that Olivia coming on the show was “the epitome of white privilege,” and argued that Olivia would “recover whether her ass was sitting at this table or not.”

During the interview, Olivia seemed to have a good understanding of her privilege, and was clear that she doesn’t expect sympathy from anyone. Adrienne wasn’t afraid to give her a hard time, saying that with all the privilege Olivia has had throughout her life, “it’s very difficult for me to feel compassionate about you.” To her credit, Olivia took the criticism in stride, saying “I didn’t come on here to win people over,” and that she just wants to apologize and tell people she’s aware that what she did wrong.

Unfortunately, they didn’t dive too deep into the particulars of what went down during the application process. Personally, I wanted a detailed explanation of how those rowing machine photos came to be, but alas, I didn’t write the questions. Olivia did, however, say that she wasn’t fully aware of what was happening during the application process, and that she thought her parents were just making a donation like all her other rich friends. She did address specifics of her application, saying that she didn’t write some of the things that were made public. Basically, she said she wrote an essay about her YouTube channel, and then someone else swapped it out for some bullsh*t about rowing.

She also said that when the scandal initially became public, she still didn’t really get what happened. When asked if she was immediately angry with her parents, she said, “to be honest, I wasn’t angry, because I didn’t have a good understanding of what happened.” She also said that she never went back to USC because she was embarrassed, and that she knew she “shouldn’t have been there in the first place.”

Olivia Hasn’t Talked To Her Parents In Prison

Both Lori and Mossimo have been in prison for several weeks now, and at the time of filming this interview, Olivia still hadn’t spoken to either of them. She said something about there being a quarantine period, and there’s no in-person visiting due to COVID, but I’m not sure how that affects phone calls. Olivia didn’t seem to know either, saying that she’s basically just waiting to hear from either of them whenever they’re allowed to call.

I’m not trying to give too much credit to Olivia Jade, but overall, she came across well in the interview. She was never defensive, she seemed more interested in listening than speaking, and she openly admitted that what happened was wrong, and she’s embarrassed she didn’t realize it at the time. She also addressed her silence in the aftermath of the scandal, saying that for a long time, she wasn’t allowed to say anything because of the legal situation. She insisted she’s “not this bratty girl that doesn’t want to change anything,” and brought up some of the volunteer work she’s been doing. Basically, her media training worked, and even Adrienne seemed impressed by the end of the interview. At the end of the day, she’s still a rich girl who did some problematic sh*t, but at least it seems like she’s trying to learn.

Over the year and a half since her fall from grace, Olivia Jade has mostly kept a low profile, taking lengthy breaks from Instagram, and only uploading two videos to her YouTube channel. In her interview, she didn’t make any big announcement about what she’s planning to do in the future, but she did hint at a return to YouTube. She spoke about how her past videos were all focused on her world, and said that when she goes back, she wants to show that there are bigger problems in the world outside her bubble. Unclear exactly what that means, but I think it’s safe to say she’s not just going to disappear forever.

Obviously, Olivia Jade is going to be fine no matter what, and she doesn’t really need our thoughts and prayers to make it through any of this. But her Red Table Talk interview was an encouraging sign that she has been able to take a step back and learn about how the world actually works, and how she was able to get opportunities and treatment that most people would never have access to.