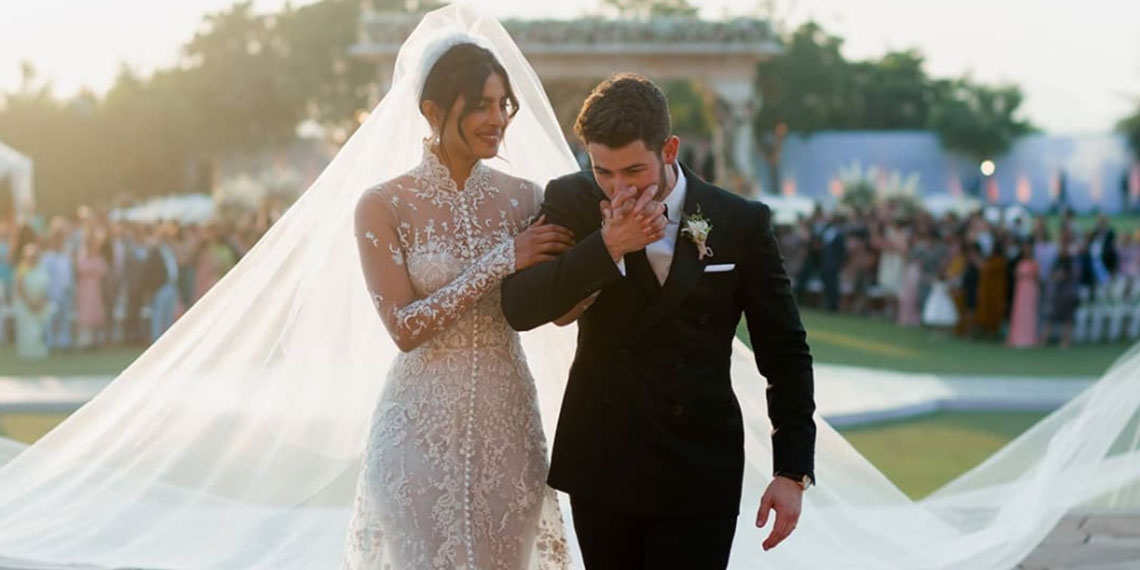 The Most Expensive Celebrity Weddings

The winter months are finally behind us, and we are entering into the most beautiful season of the year. Wedding season! There’s almost always an open bar, shrimp cocktail, and the potential you’ll make out with your step-cousin. What’s not to love? In fact, I’m currently looking forward to my brother’s wedding, where, with the help of my unlimited Bar Method membership, I plan on outshining everyone and calling it “Cait’s Big Day.” See! These things are fun!

But I hate to break it to you: no matter how awesome your sorority sister Deborah’s all-inclusive Cabo nuptials were, they were a mere dumpster fire compared to the opulent events that celebrities throw for their weddings . I guess when you made a billion dollars on a sex tape, why not get married in a castle for the publicity to celebrate the third time you found your true love? It doesn’t make a mockery of the sanctity of marriage at all! This year, the main event we’re all waiting for this year is the marriage of the King and Queen of Extra, J.Lo and A-Rod, where I’m sure as a party trick they’ll have Instagram models lighting stacks of hundreds on fire, and serve champagne spiked with liquid gold. But since we don’t know exactly when that’s coming, I’ve decided to take a look back at the most expensive celebrity weddings of all time. Proceed with caution, because these numbers have been known to cause extreme jealousy and even rage blackouts.

You can’t mention extravagant weddings and leave out our most recent gluttonous celebrants, The Hottest Jonas Brother ™ and his Bollywood star bride, Priyanka Chopra. Nick and Priyanka had not one, not two, but THREE wedding ceremonies, all in the hopes of luring Duchess Meghan to just one, but apparently she was busy making Kate Middleton cry or whatever. Kidding! I mean, not kidding about the three weddings, I would never joke about something like that. I’m kidding about them trying to trap Meghan Markle into coming, I’m sure they know she already dropped them faster than ABC dropped Quantico.

One of the weddings (don’t ask me which one, I’m already exhausted from this story and I have numerous disgustingly ostentatious weddings to go), took place at the Umaid Bahwan Palace, a royal palace-turned-hotel in India, which costs $60,000 a night. They also put on a fireworks display and wore custom Ralph Lauren designed outfits. I know you’re wondering, “Did poor Nick Jonas have to spend all his Camp Rock money on this wedding?” and the answer is a resounding NO! Thankfully, our lovely couple got practically the whole thing covered by sponsorships including Tiffany & Co, Longchamp, and Elit Vodka. I hope you all are able to get sponsors for you own weddings, because is it even true love if you aren’t getting paid for it?

TBH I totally forgot Kris Humphries existed until last week, when he decided it was important to let the world know he is the proud owner of a Five Guys franchise. Congrats! This revelation really just made me hungry, but it also got him into this story, so I guess he can call it a win?

In case you also forgot about Kris, let me refresh your memory. His wedding to Kim reportedly cost $10 million, $20K of which was spent on the cake that they all enjoyed, and then they immediately went to their plastic surgeon and had the fat the cake left on their waistline injected into their asses. I’m just speculating, but we all know it’s plausible. This wedding is especially fun because it involves math! If you spent $10 million on a wedding that last 72 days, how much did that cost you per day? Probably more than Kris’s Five Guys franchise will ever take in, that’s for sure.  (It’s actually $138,888.88 per day, if you’re seriously curious).

After Kris Humphries, Kim decided she needed a more famous husband fell in love with longtime friend Kanye West. So, in typical girl-with-no-shame fashion, she decided to throw yet another obscenely expensive wedding.

Kim and Kanye got married in Italy at the Forte di Belvedere, which cost over $300,000 to rent. There was a performance from Andrea Bocelli, and her gown was Givenchy Haute Couture. Okay, now listen hard, because this is the only nice thing I’m ever going to say about Kim Kardashian: I kind of liked her dress. Now excuse me while I go burst into flames. Anyway, the lovely couple was married amongst their friends and family, except for Rob, who deemed himself too fat to attend. If only we could all use that excuse Rob, IF ONLY. When all was said and done, the event cost around $2.8 million, according to E! Online. That sounds atrocious, but TBH the cost per day is WAY less than her wedding to Kris Humphries, so it was practically a bargain.

When the ultimate bachelor announced his engagement, the world was stunned. Everyone thought that George would grow old with his motorcycle and Max, his potbellied pig. But he gave it all up to eventually run for office marry a gorgeous British human rights attorney. Fine, if you had to settle, George, I guess she’ll do.

The pair got married in Venice, with their A-list guests arriving by boat and looking every bit the movie stars they are. Everyone stayed in Cipriani hotel suites that cost a reported $3 million, and George looked dapper in his Giorgio Armani tux, while Amal wore a custom Oscar de la Renta gown, which she showed off on the cover of People magazine. The whole event cost over $4.5 million, and that doesn’t even include all the Casamigos Tequila that I’m sure George provided at no cost.

Finally, we get to the royalty! The parents of the most badass member of the monarchy, Prince George, got married on April 29, 2011. Their wedding is unique because most things didn’t actually cost money. The castle for the reception? Oh no biggie, they own it. The tiara? A loaner from the Queen’s personal collection. Kate’s makeup? Oh, the future Queen consort will do it herself, thanks. So why the f*ck did this wedding cost a reported $34 million? SECURITY. That’s right! A whopping $32 million was spent to keep this event secure. And I guess it was worth it? All members of the royal family (as well as Pippa’s iconic backside) survived the event and have lived on to bless the world with their beautiful offspring, mediocre fashion, and petty family fights.

So there you have it, all the most expensive celebrity weddings. I wish there had been more circus performances and puppies serving appetizers to report on, but if that happened, no one is telling me. Fingers crossed J.Lo will do it!