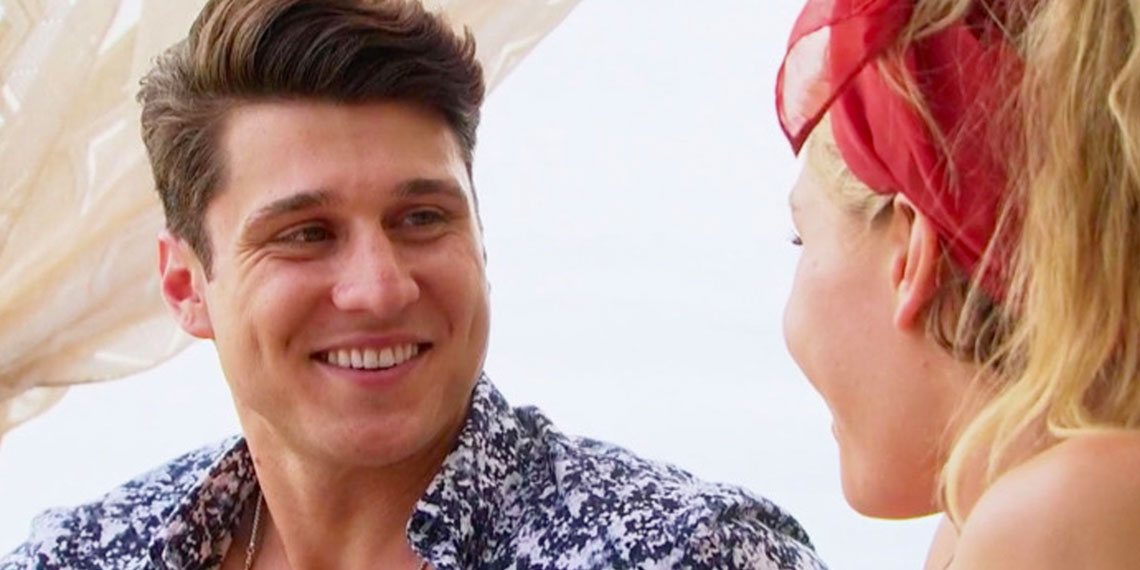 Welcome back to another thrilling week of Bachelor in Paradise! Last week (was it only a week ago?) Jordan made the grand romantic gesture of spelling out “I’m sorry” in the sand after he let his true personality slip and acted like a sociopath at the last rose ceremony. Happens. Tbh my dog has shown more remorse after getting into the secret stash of treats in my closet than what I’m seeing rn, but fine. So now we’re left with the question of who Jenna will trust with her heart. Will it be Jordan? Or will it be Benoit? Or will I gouge my eyes out by the end of this episode rather than watch these losers fornicate on a beach for one more goddamn minute? Only time will tell!

The episode begins with Jordan and Joe lamenting over the fact that these hoes ain’t loyal. Cut to Jenna who’s reverse cowgirling Benoit over by the beach chairs.

Connor walks into Paradise, but what I find more troubling is that Chris Harrison just alluded that we’re only in the middle of this season. HOW are we only halfway through this garbage show? I’ve already spent 32 hours of my life watching Tia verbally beat a virgin into being her boyfriend and now you’re telling me I might have 32 MORE HOURS TO GO??

Uh ohhh. Krystal is looking at Connor like he’s a gluten-free, sugar-free snack and today is her cheat day. This can’t be good for Chris. *turns up volume*

KRYSTAL: My timing with Chris is just, like, divine.
ALSO KRYSTAL THE SECOND SOMEONE WITH A PULSE AND A PENIS WALKS INTO THE ROOM:

OH SH*T. Connor asks Krystal on a date and she says yes! I love that Chris is so upset with Krystal for doing the exact same thing he did to Tia. He’s like “but you said you were committed to me? And you wouldn’t go on any other dates?”

Hello, pot, kettle? Have you met the goose?

Krystal says she doesn’t want to be disrespectful to Chris and then decides to wear a bra as a top on her date with another man. Lol I would love to know her definition for the word “disrespect.”

Their date involves the two of them being buried alive and having a strange man chant at them in Spanish. This feels like less of a first date to me and more of a personal nightmare of mine, but you know, to each their own.

Okay, this date was, like, made for Krystal. The weirder this sh*t gets the more Krystal looks like she’s about to orgasm in that sand dune. Meanwhile, Connor is just feeling blessed that he’s finally in an environment where it’s appropriate to wear a shirt unbuttoned to his navel. It’s the little things, isn’t it, buddy?

Back at the beach, the Jenna/Jordan/Benoit triangle continues. Jordan pulls Jenna aside and says that he’s “basically in love with her,” which is similar to the one time a guy I’d been making out with all night told me he was “basically 21” when I asked if he wanted to go to a different bar. Doesn’t mean much does it, Jenna?

JORDAN: I feel like we’re in a good place right now because we don’t even have to speak anymore. Just dry hump.

If that’s not the foundation for a strong relationship, then IDK what is.

Cut to Jenna, who is already making out with Benoit again. Damn, this girl cannot make up her mind. I mean, it’s either that or the massive amounts of tequila polluting the cognitive parts of her brain.

Okay, I totally forgot Annaliese and Kenny were even a thing. Kenny tells Annaliese he wants to leave Paradise so he can go to his daughter’s recital. Lol I love when these people suddenly remember that they have kids and they can’t just get blackout on a beach indefinitely. I’m sure social services doesn’t look to kindly on that, either.

Meanwhile, Annaliese looks suicidal when yet another guy would rather flee the island than be at the receiving end of her rose. I can practically smell the desperation wafting off her from my television screen. She’s like “Kenny is such a good guy but what about me??”

Kamil walks into Paradise next. If you’ll recall, Kamil is the “social media participant” who told Becca—the goddamn Bachelorette—that he’d only be willing to put in 40 percent of the work for their relationship. What a catch, ladies! These must be the diseased fish people keep saying are left for us in the sea.

God f*cking damnit. I spoke too soon. Annaliese, sensing that a something with a Y chromosome just slithered into Paradise, immediately wants to date him. She keeps talking about how Kamil is so her type, but I mean, production could prop a stick against a palm tree and draw a face on it and she would be like “I see a future with him!!”

Kamil asks Annaliese on the date and they go dune buggying through the jungle. I’m a little nervous  that Annaliese might ram that dune buggy into a tree so she can go all Misery on Kamil’s ass and trap him on that island once and for all.

If by “strong” she means “is still unclear as to how to pronounce his first name” then, yes, I guess you could say they are a strong couple.

Meanwhile, Kevin and Astrid get their first minute of screen time all season AND IT’S SO HE CAN BREAK UP WITH HER. Kevin, are you f*cking kidding me with this rn?

KEVIN: How can I trust you if you aren’t going on dates with other guys?
ASTRID: Wut

Okay, I kind of see what Kevin is saying here. He has reservations about a relationship that’s fueled by tequila and Stockholm Syndrome, and, like, that’s fair. But he’s not wording this well at all.

Trying to figure out if we’re “boring” or “normal”. #bachelorinparadise

Elsewhere, Jordan is trying to re-stake his claim on Jenna. She’s like “do you see yourself getting married in Paradise though?” Oh, honey. If you believe this guy is ready to commit to anything longer than whatever filter is trending on Instagram at the moment, then I’m genuinely concerned for your life choices. Seriously. Where is your mother?

WAIT. JENNA GIVES BENOIT THE AXE. WHAT. I can’t believe she thinks this modern day Zoolander has more potential for a long term relationship than man who is ready and willing to get engaged to someone after sliding into their DMs once.

Moving on to our other love triangle: Kendall, my future husband, and Leo. Kevin tells Kendall that Leo made out with Chelsea in the hot tub the other night and he seems shocked that Kendall had no idea about it. Kevin, you had one job! Also, Kendall you can’t really be shocked that a man with hair like that cheated on you. You just can’t be.

Kendall confronts Leo about the whole kissing thing and it is a sh*t show. Tbh the way Leo is responding to someone accurately reporting on actions that he definitely did is super telling. Kendall needs to dump his ass immediately because his behavior is problematic AF.

Leo is, like, trying to fight anyone who makes direct eye contact with him rn. He’s throwing a tantrum in the pool, and it’s a little scary. Meanwhile, Kevin looks like he just wet himself. Come on, Kevie, you could totally take him!

After a heart-to-heart with Colton over Tia’s limp body (seriously, can someone check and make sure that b*tch is still breathing??) Kevin decides to confront Leo about everything. He’s upfront and honest and I’m shocked ABC let such a thing happen on their show.

Godddd Leo is such a piece of sh*t. He’s totally in the wrong here and is taking out all of his anger on poor Kevin, who thinks the proper way to end a fight is with a Justin Trudeau quote and not with “k.” Bless his heart.

Leo goes back to Kendall to talk things out AND STARTS BLAMING HER FOR EVERYTHING. Okay, seriously, when can we start corralling up all the men and keeping them locked under ground except for procreation? Because it is loooong overdue.

LEO: I kissed another girl, how could you do that to me?
ME AND ALL OF AMERICA:

Okay, IDK how much more of this I can listen too. Leo is giving me emotional whiplash from this conversation and I’m not even in a relationship with this guy.  Check out the transcripts:

Imagine being that kind of manipulative asshole.

Seriously, what kind of manipulative sh*t is this? Oh THANK GOD Joe shows up to (hopefully) beat the sh*t out of him with a beach chair. Joe, you’re too pure for this earth!!

And on that note, I’m out! We have to wait until tonight’s episode to see if all of Paradise will rally together and burn Leo at the stake. Fingers crossed!!