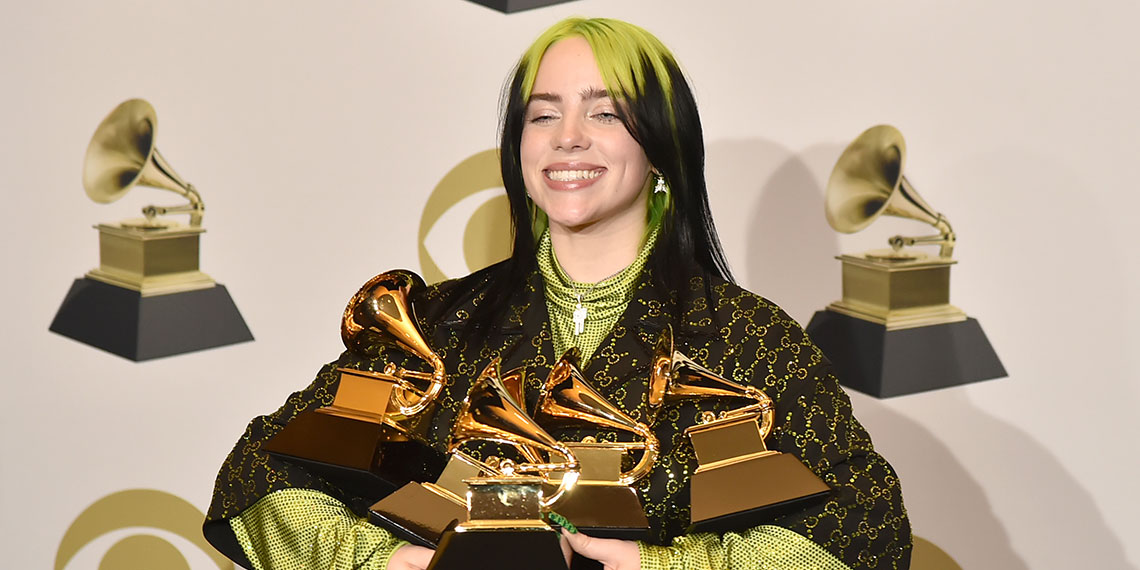 Everyone’s hearts were heavy going into the GRAMMYs this year, after a helicopter accident that left nine people dead, including Kobe Bryant and his 13-year-old daughter Gigi, as well as Gigi’s teammate Alyssa Altobelli and her parents. As host Alicia Keys astutely pointed out in her opening monologue, everyone at the Staples Center was sitting in the house Kobe built, mere hours after his tragic passing. Many of the performers paid tribute to Bryant; also in everyone’s hearts was Nipsey Hussle, who passed away in March of 2019. The 62nd GRAMMY Awards were more somber than most, but there were still many moments worth acknowledging.

Still reeling from the news of the fatal helicopter crash, many artists used their stage time to pay tribute to Bryant in some way.

Lizzo opened the show with “Cuz I Love You”, announcing, “Tonight is for you Kobe” before diving into her ballad. As per usual, she crushed her performance, bringing everyone some much-needed good vibes to kick things off.

Boyz II Men joined Alicia Keys onstage for a moving tribute to the deceased basketball star, when they sang “It’s So Hard To Say Goodbye”. Usher sang the same song at the 2001 Super Bowl to honor Aaliyah, making the choice especially powerful.

Before beginning her planned monologue, Keys sang a medley that recounted moments of the year in music (and also took shots at Trump), saying before she sang, “I know how much Kobe loved music. He would want us to keep the vibrations high.” For the most part, the performances, presenters, and winners managed to do just that.

Run DMC held up a #24 Bryant jersey during their performance of “Walk This Way” with Aerosmith. Lil Nas X also had a Kobe jersey on the set during his performance of “Old Town Road”—his presence was really everywhere during the show.

We were all wondering how the Grammys would handle this sudden tragedy, and they paid tribute in a classy way without taking away from the reason we were all here: to celebrate music.

If the GRAMMYs give us one thing besides Sunday night insomnia, it’s plenty of performances to talk about. Some were fun, some were moving, some were unexpected, so let’s go through the more memorable ones (because there are always about 10 performances too many).

The Jonas Brothers were great but should have just given the people what they wanted and played “Burnin’ Up”. The highlight of their performance was the rogue piece of spinach stuck in Nick’s teeth and his tongue-in-cheek response to it, tbh.

And at least you all know I eat my greens. 🤪

Usher performed a medley of Prince’s hits in tribute to the late icon, and it was awesome. I definitely forget about Usher sometimes, but he reminded all of us why he’s such a star. Also, I definitely need to listen to more Prince, because all of these songs are incredible.

Lil Nas X had one of the best performances, and definitely the most fun out of anyone, when he performed a medley of his hits (yes, haters, he has more than one). He brought out the Walmart yodeling kid to join on “Old Town Road” (and Billy Ray Cyrus, but like, that was to be expected). But probably the most iconic moment was when Nas joined Lil Nas X onstage, effectively answering a question I’ve had for the past year, which is if Nas feels any type of way about Lil Nas X’s stage name. Glad to see there is nothing but love there.

After getting emotional and having to restart, Demi Lovato gave a powerful performance of “Anyone”, the heart-wrenching song she wrote four days before suffering her overdose in 2018. This was her first live performance in nearly two years, and her voice is just as stunning as ever. If you weren’t crying before, you were definitely crying watching her triumphant comeback. She’s also performing the National Anthem at the Super Bowl this weekend (casual), so I have a feeling it’s going to be a big year for Demi.

The tribute to Nipsey Hussle featuring Meek Mill, DJ Khaled, John Legend, YG, and Roddy Ricch was more than worth staying up past 10pm for, even though it should have occurred wayyyy earlier in the show. DJ Khaled and John Legend really gave Sunday Service a run for their money. I’d join their cult.

Ah yes, the GRAMMYs also has awards. This is really the only award show where the prizes feel like an afterthought, but we should still talk about them. This year, they decided to move one of the more highly-anticipated awards, Best New Artist, to the end of the show, probably because they knew everybody would take a nap if they followed what they did in years past and put it toward the beginning. I would say I’m not mad about the choice, but I am most definitely mad.

Speaking of the beginning, Lizzo won Best Pop Solo Performance, and thank god, because if Lizzo didn’t win something, and early on, the GRAMMYs wouldn’t be around for next year. She gave a touching speech about making music that liberates people and makes people feel good. She talked about the importance of reaching out to people who might be struggling, and also to reaching out to those close to you if you might be struggling. She said, “Let’s continue to hold each other down and lift each other up.” As my dad would say when trying to sound hip, I’m down for that.

Dan + Shay won a Grammy for Best Country Duo Performance and if you don’t know them, they’re the people that are on your friend’s pregame playlist that you beg to skip. The song they won for, “Speechless,” is like, the official song of engagement and wedding videos in the last year, so you probably either love it or hate it.

DJ Khaled, John Legend and Nipsey Hussle won for Best Rap/Sung Performance, which no one can argue was deserved. John Legend gave a nice tribute to Nipsey in his acceptance speech: “We’ve seen so much tragedy today and last year and so much has gone on, but let’s love each other and love our families and hold each other tight.” Overall, this was a weird night, but moments like this made it worthwhile.

And speaking of Best New Artist, Billie Eilish won that. And Song of the Year. And Record of the Year. AND Album of the Year. That’s right, it was a clean sweep. She’s only 18 years old, and none of us will ever be this accomplished in our lives. Ya hate to see it! Billie is only the second artist in history to win the big four awards in the same year, and I feel like she more or less deserves it (even if Billie herself said she wanted Ariana to win Album of the Year). If nothing else, it’s notable that the Recording Academy is willing to celebrate someone from the younger generation who’s doing something fresh and different. In the past, the GRAMMYs have been accused of only caring about old people, and that definitely wasn’t true this year.