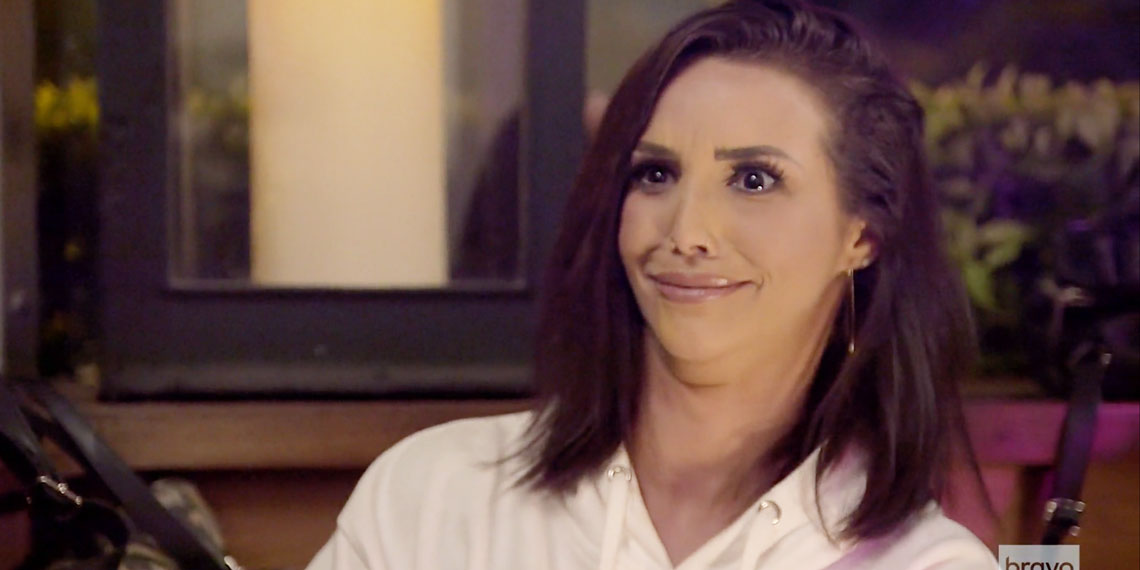 If you’ve been watching Vanderpump Rules this season, you know that Scheana has been non-stop talking about her (now-ex) boyfriend Rob’s God-like abilities. You know, like not being a drug addict swiftly installing TVs (in 7 minutes, can’t forget that detail) and having basic competency in water sports. What a prince. Obviously, her last husband did not set a very high bar. But my sympathy for that ran out maybe the fifth time she extolled the virtues of Rob’s literal penis to a room of her friends and/or producers. (Direct quotes include “he’s bigger in every way” *suggestive wink* and “I like his dick I don’t want anything to happen to his dick” *severe crazy eyes*).

Just checking in, anyone shocked to find out they’ve since broken up? No? Bueller?

Anyway, Scheana has decided to break her silence on why she’s been reaching new levels of troll-hood this season, and her fake reason is even better than I could have imagined. According to RealityBlurb!, Scheana was on Juicy Scoop with Heather McDonald (a podcast you may remember from that time Lala Kent made my ears bleed) and discussed her criminally annoying behavior. Here’s her excuse, verbatim:

“Look y’all. I smoke a lot of weed. I tend to repeat myself a lot. I forget things a lot. And I think I was just so impressed by him that I just kept saying it over and over again.”

Yeah, let’s dissect that. Even if we’re taking her completely at her word here, the person Scheana just described is not a lot of fun to be around (and no less obsessed with Rob than we previously thought—she still admits to being “SO impressed” by what are honestly normal adult things. Minus the wakeboarding, but I consider that a negative.) But I have to say, I have a hard time believing Scheana was honestly just too stoned to function for all of season 6. For one, the machine-gun rapidity of everything she says is way more in line with an Adderall prescription. When you picture a high person, you picture a sober Tom Schwartz.

Also, I’m no weed scientist (hold up, new career goals), but as I understand it, weed makes you annoying and forgetful for like, the 2-3 hours after you smoke it. Possibly, with chronic use, longer effects of memory loss. Either way, it doesn’t exactly line up with a six-month shoot in which one perfectly memorized monologue about Rob’s TV hanging abilities is repeatedly wiped from your brain. (Unless this is like, military-grade Russian weed furthering the plot to unravel American democracy with the ability to recognize and track specific…yeah okay, it’s possible that I, too, smoke too much weed.) In any circumstance, the fact that she’s told the same anecdote several times, VERBATIM, is creepy, and cannot be excused by just being sooo cool, and sooo much of a guy’s girl (major Scheana season 1 vibes here) that she’s constantly smoking da ganj.

Admittedly, Scheana does say some reasonable things on the podcast. Like, “I want to reach in the TV…and strangle and be like ‘Shut up!’” (A thought only made less relatable by referring to herself in third person, a known trait in narcissists.) But seriously girl, if you’re going to own up to being the living worst, then just do it. Don’t bring our good friend weed into this, especially while maintaining the waistline and inflection of someone who’s never inhaled in her life. If you want to take over the stoner girl thing, I’m sure Ariana and Katie will be happy to fight you for it. For now just focus on raising the bar to a boyfriend who will a) kiss you b) buy you presents c) not respond to “I love you” with literal crickets. You’re up a level from checked-out drug addict; let’s keep on climbing.