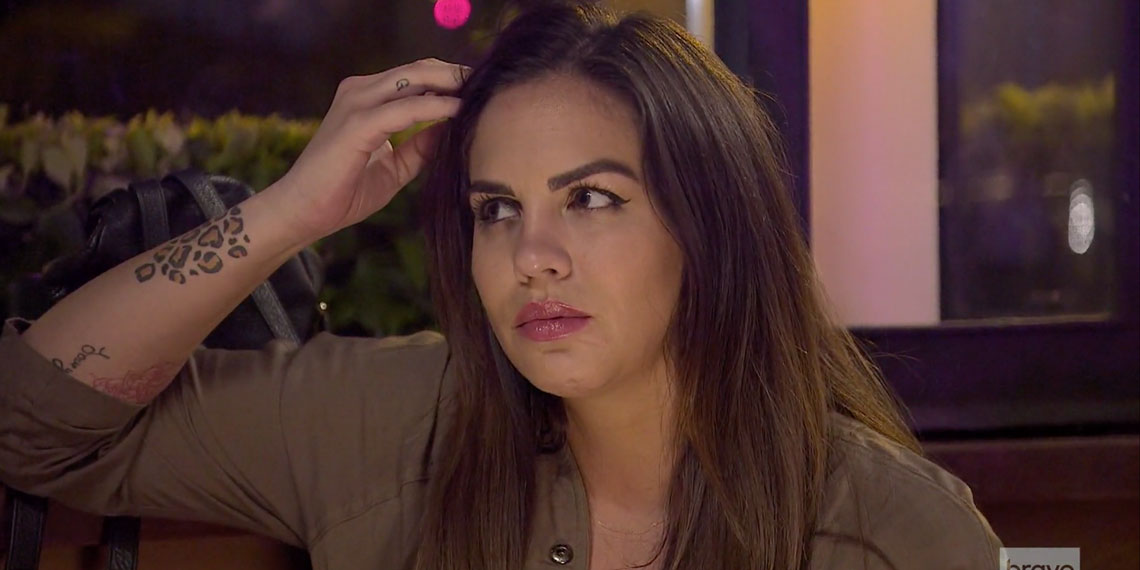 Happy Monday (or I guess Tuesday by the time you are reading this), and let’s gather for another episode of Bravo’s deeply rooted misogyny on display—or as they are now calling it, Vanderpump Rules. Last week the producers tried to make us think Kristen and James hooked up, even though anyone with more than two functioning brain cells could quickly deduce that they most certainly did not. Then again, given that most of this cast only has 1.5 functioning brain cells, that may be too big an ask. Sometimes I wonder what I am still doing here, and then I read the comments of my recap last week. You guys are my reason for continuing on. My raison d’être. Or more accurately, my raison de voir. OK, I’m done now. And my dad said my combined French and Creative Writing degree would never serve me in the real world! Ha!

This episode starts at Catch, where we left off last time (tbh I needed a reminder), right after Kristen throws a drink at James’ face. This is literally the most convoluted drunken game of telephone I have ever seen in my life. Lala is mad at Kristen, but not really for throwing the drink. She’s more mad at Kristen’s involvement in these rumors that she didn’t even start.

James goes outside to call Raquel crying. Sandoval comes over, and James drops a bomb: Schwartz came by while Kristen and James were at the hot tub and he wanted to ride bikes. Nobody focuses on the fact that this whole interaction just got a lot more innocent given there was a third party present who could potentially vouch for this non-hookup if he wasn’t so wasted all the time. Instead, Sandoval employs some high level interrogation tactics:

Sandoval: Dude, is it possible something happened that you don’t remember?
James: Dude no I already told you everything that happened.
Sandoval: Dude.

I am so glad that Bravo wasted a few minutes of my time on Stassi’s ranking of condiments to put on pizza. Meanwhile in Jax and Brittany’s room, Tom has a knife strapped to his leg, which isn’t at all concerning.

Jax: We’re gonna turn up, as the kids say. Turnt? Turn up? Turnt?

I’m so glad I’ve gotten my fix of Jax butchering common expressions from three years ago. *Closes the computer, is done for the night*

James and Lala are chilling and Lala appears to be drinking water out of a bottle.

I’m calling the authorities. Lala also likens herself and James to Eminem and Dr. Dre, because she just couldn’t go with a non-rap analogy like a normal fucking white girl.

Strangely, Katie gets mad at Kristen for throwing a drink. Wow, somebody call Ariana because Katie is on the highest fucking horse right now. Did she just get amnesia of the past year? Does she not remember how much of a monster she was just one season ago?

Jax is going home in like, a day but still has to take the time to call Kelsey. Do you see Brittany’s heart visibly break before your eyes, or am I just projecting?

Stassi: What if Jax wasn’t FaceTiming Kelsey and he was—
Brittany: FaceTiming some hoe?
Me: What’s the difference?

I zoned out for most of Jax and Kelsey’s conversation but zoned back in RIGHT when Kelsey basically compared Jax to Nelson Mandela. Yeah, Nelson Mandela’s work to end apartheid is totally the same struggle as Jax’s battle with his own sobriety and his being too afraid to dump Brittany.

Producer: What country is Nelson Mandela from?
Jax: Africa?

Give this producer an Emmy.

We made it a whopping 18 minutes before Scheana gushed about Rob’s ability to do something mundane. Well, team, it was fun while it lasted.

Kristen and Carter go out to lunch, which is the most I’ve seen of Carter… ever. Kristen breaks the news of the rumor to him, and Carter doesn’t take it great. He vows to have a conversation with Sandoval. Now I feel bad for Kristen because there is NO way this ends well. Sandoval was not there, and he was the source of this false rumor in the first place! He is a completely uninvolved third party, but even worse, he has a personal agenda, which is to make people believe James and Kristen hooked up—perhaps as payback for Kristen cheating on him six years ago?

Me, reading my own theory I just made up on the fly:

Tom Sandoval is a messy bitch.

Back at SUR, Lala manages to convince Lisa that her lips have grown threefold by sucking on a bottle and not from injections. Lisa pretends to believe it; she is doing the Lord’s work.

I fucking hope to God Brittany does not follow Jax to Florida. Like, I don’t believe for a second that this job is real, but it worries me that Brittany keeps putting it on Jax to “think it through” and doesn’t, I don’t know, put it on fucking herself to make a decision for her own best interest??

Stassi is still pretending to be an event planner and is planning a party for Katie’s beauty blog that I forgot existed. Katie and Tom are still talking about the Kristen rumors, and Stassi says that Kristen is acting guilty because she’s not just brushing off the rumors. Why do I have a feeling that if Kristen laughed off the rumors everyone would take it as an admission of guilt? Hm, I don’t know, maybe because THAT’S EXACTLY WHAT JAMES FUCKING TRIED TO DO AND IT’S THE REASON WE’RE EVEN TALKING ABOUT THIS?!??

Scheana is way too happy to be divorced. She’s only been divorced for six days but she and Rob are apparently “looking at houses.” I take this to mean that Rob is looking at houses and Scheana thinks she’s going to get to move in, and Rob has no intention of letting that happen.

At SUR, James is DJing at See You Next Tuesday while Raquel stands next to him, making incoherent sounds when someone comes up to say hi. Jax takes this moment, in the middle of his shift, to confront Adam.

Jax: He’s not even scheduled to work. It’s ballsy to show up here.

He says as if this entire crew doesn’t constantly come here to drink during their off hours. Jax is like, “I heard you have a crush on my girlfriend?”

Apparently Jax and Adam were hanging out the night Scheana was trying to hook him up with Jax. This just adds another layer of weirdness—why didn’t Adam turn to Jax and say “Hey dude, why is Scheana trying to hook me up with Brittany?”

Jax: I have a home and a family, I have dogs. This isn’t a candy cane relationship.

Sorry, what are those words? “Candy cane relationship”? Can someone elaborate? Also, dogs =/= children, but that’s a think piece for another time.

Ariana is dancing on the bar, talking about making a boatload of money while she’s pouring shots into people’s mouths. How they gonna charge for that? Is there an item on the POS system for “bottle to the face”?

I don’t understand how Jax leaves the conversation with Adam and is mad at Scheana but then immediately goes to Brittany to be like, “you need to talk to Adam. How could you let this happen?” I’m sorry, what? Why and how is this Brittany’s problem?

James is probably right in that Jax started these rumors to take the heat of of him. Sometimes these people are a lot smarter than I give them credit for. Only sometimes.

Jax confronts Scheana, and she says multiple times “it was not a set-up.” It’s gonna be real awkward when we roll the tapes and she reveals, without anyone even asking, that this whole thing was a poorly constructed plan to get back at Jax for telling the truth that Rob doesn’t love her.

Scheana doesn’t understand what karma is. She thinks that orchestrating a situation for Brittany to get with a new guy is “karma”. Scheana, karma is like when someone speeds past you and cuts you off and then they get pulled over. Karma is not a situation that you purposefully fabricate to achieve a particular end.

Jax goes over to James and Lala to talk about the James rumors while Ken and Lisa come over. Jax just goes ballistic about everyone “flipping the fucking script” on him. Hm, you mean calling you out for the shit you do? Or you mean only you can gaslight and manipulate people but it’s not cool when other people do it to you?

Jax is just standing at the host stand, flipping random people off. I captured a screengrab of it for no other reason than I think it is ridiculous.

Look at the blind hatred in his eyes.

Lisa tells him to leave because he’s being a baby and Jax is like “I’m not being a baby!” Jax 2 seconds later: “It’s not fair! Nobody’s listening to me!”

I’ll be honest with you guys, my internet connection cut out at the last three minutes, so I’ll just cover anything I didn’t hit next week. Sorryyyyyy!