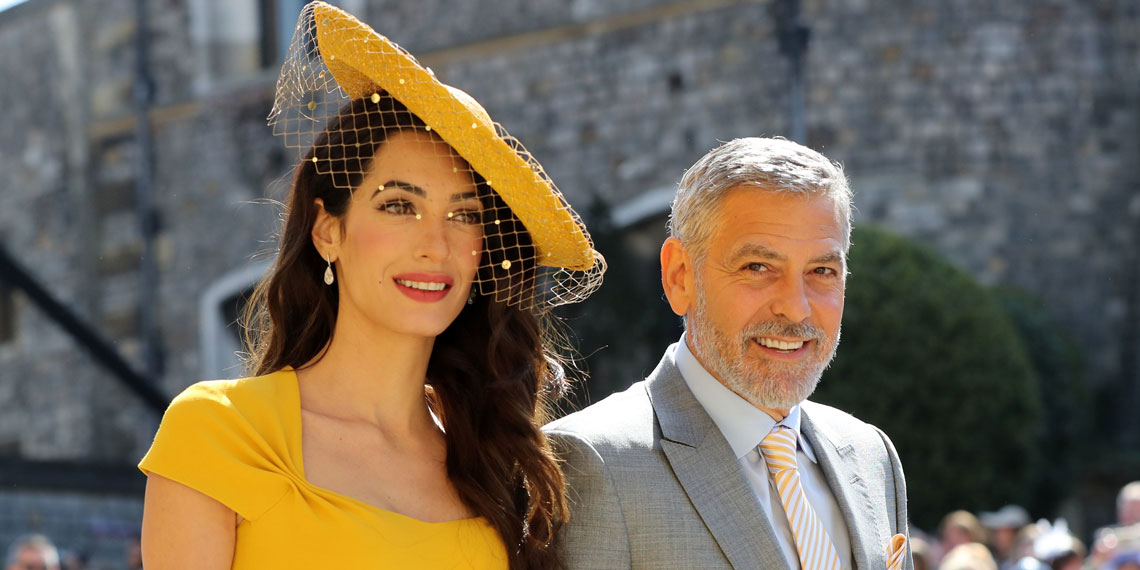 Which Was More Underwhelming: Meghan’s Dress Or These Celebs’ Hats?

You might have heard there was a wedding this weekend! The world’s favorite royal and most obvious example that what happens in Vegas does not actually stay in Vegas, Prince Harry, married Deal or No Deal briefcase girl Meghan Markle. Congratulations! I’m sure they will be very happy together for the next 18 months. In all seriousness, the royal wedding was gorgeous and the dress was underwhelming, but that’s not why I was watching. I’m here for the hats and the fascinators. Didn’t I just sound so British there? Being a Jersey girl myself, I’ve not had the opportunity to wear a balls-out-bonkers hat to a wedding. They frown upon that in my home state, but you can bring all the cleavage you want. We’re a complicated people.

I had high hopes for this wedding, since all the celebrities that befriended Meghan when they found out she was dating Prince Harry were invited to attend *cough* Oprah *cough*. Also, we all remember how Harry’s cousin Princess Beatrice loves to upstage the bride.

So imagine my disappointed surprise when I saw that only a select few celebs really brought it. I can only imagine they heard the bride’s dress was going to be boring af and decided to follow Suits suit? Let’s take a look at some of the standout pieces.

Since we’re talking about the royals, it’s only appropriate to begin with America’s Queen, Her Royal Highness Oprah Winfrey. As my work friend just commented, Oprah looked a little cray-cray. Her hat designer managed to create a bespoke piece that included feathers that reach all the way to Chicago from Windsor Castle. It’s a modern engineering marvel. I pity the fool who had to sit behind her.

Thank you @stellamccartney ! Realized Friday morning the beige dress I was planning to wear to Royal ceremony would photograph too “white” for a wedding.Her team did this overnite. Hat is vintage @philiptreacy been in my closet since 2005 with new feathers. OMG was this an extraordinary day! #Harry&Meghan #RoyalWedding #Lovedeveryminute

If you read my Bella Thorne article, you know I think Serena is the GOAT. She can do no wrong in my eyes, and she is certainly the GOAT in the hat department of this wedding. I can only imagine her fascinator was modeled in the image of a flame because Serena shoots straight fire on the court and in this outfit. How many more compliments do we think I need to give her for her to call me?

Amal Clooney is British, so I figured she would know better than others how to toe the line of totally insane but also respectful. And we all know she loves a fugly outfit (that Met Gala dress, amiright?). But instead, she dressed like classic school girl character Madeline.

The A-list guests are starting to arrive to the #royalwedding! Tap the link in the bio to see more. | ????: Getty

It’s been widely reported that the Quantico actress is one of Meghan’s closest friends. So naturally when she got the invitation to the royal wedding, she went right to her stylist and said “Gimme one that looks like a spaceship, only purple.” And they did just that. After the wedding it conveniently transported her back to her home planet of crazy.

I’d be remiss to write this article and not mention that Spencer Hastings was there! Her hat was perfectly lovely and normal and frankly I expected more from a woman that agreed to play her own identical twin on TV just because the writers ran out of ideas. I can only hope that Troian spent the whole wedding using her SPOT-ON Alex Drake British accent.

Weddings are a joyous occasion. But today was just off the charts amazing. Congratulations Meghan and Harry. I am so grateful I got to witness your love today. There are many happy years to come. Also. Thank you so much @annabelleharron & @temperleylondon for making me feel so beautiful on such a momentous occasion. And last but definitely not least… thank you @halfadams for being your devastatingly handsome self and letting me come along for the ride.

Clearly the celebrities did not bring their A-game to this wedding. Fingers crossed the reception outfits were better and that in 20 years I’ll be writing about the Oprah-Prince George power couple wedding.