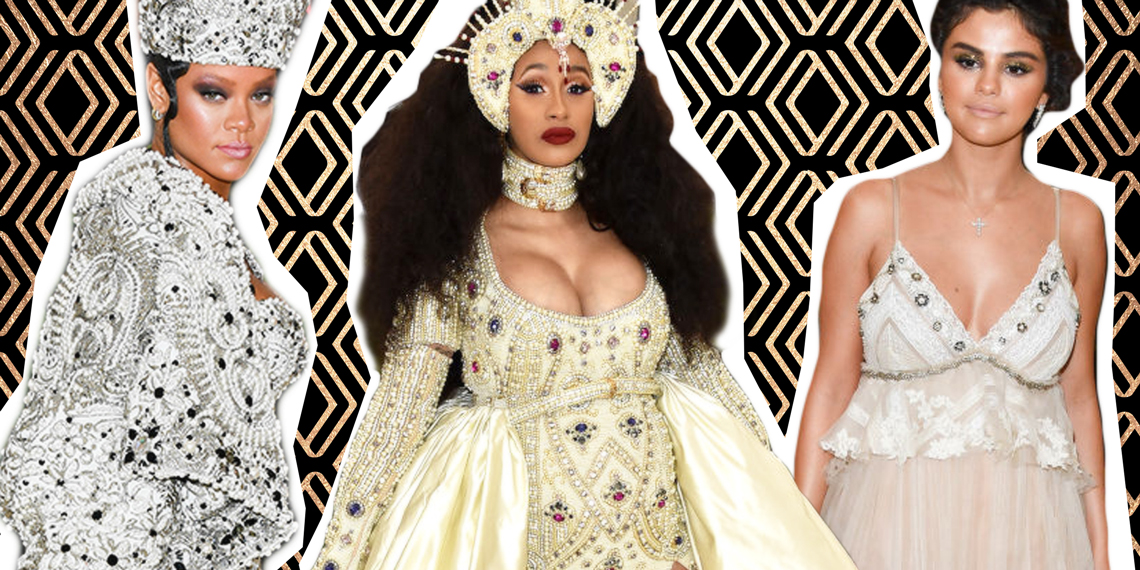 You know how basic bitches always say the Victoria’s Secret Fashion Show is their Super Bowl? Well, if that’s true, then the Met Gala is a meme-loving betch’s Super Bowl. Except, like, O.J. Simpson returns and makes the game winning touchdown at 70 years old, then confesses to murder, and the halftime show is just John Legend singing show tunes while Chrissy Teigen eats a bucket of fried chicken on top of the piano. It’s that ridiculous, and the 2018 Met Gala didn’t disappoint.

As I’m sure you’ve all been waiting for (probably?), here’s a recap of the 2018 Met Gala. This year’s theme was Heavenly Bodies: Fashion and the Catholic Imagination. If the classroom I took one year of CCD classes before making my First Communion didn’t have a very distracting pet guinea pig in it, I might have paid more attention and would currently be able to provide more insight into that theme, or at least know what to do with my hands on the off chance I get roped into attending a church service. However, I can’t (sorry, Grandma), so instead, I’m going to talk shit about celebrities wearing outfits that require teams of people who make more money than me to help them walk around. Here are the celebrities who inspired the best memes with their god-awful outfits, and those who looked so good that we’ll actually give them a break for once.

At best, Lana looks like the hottest girl at a cosplay convention in the Midwest. While I can appreciate the dramatic implications of wearing a dress that makes it look like you’ve been stabbed in the heart a bunch of times, I can’t get behind the creepy wizard bird lady vibe, or the Weird Al Yankovic hair. I am truly disturbed.

I actually could warm up to this look if someone could please confirm that Shailene Woodley purposefully showed up to the Met Gala in a Sexy Lord Farquad costume. If I were Shailene Woodley, I would have shown up, taken one look at Zendaya’s outfit, and promptly left.

I would do anything to hear an unedited clip of the noise this shit makes when you walk. But all joking aside, I’m going to try to be positive here. Solange could probably buy all the Getty Images of herself in this outfit and sell them as Rorschach Tests to therapists in hipster neighborhoods. If you think I’m bitter, I am—Solange totally stole my “sexy Ursula” costume idea for Halloween.

The Olsen Twins have been dressing in mysterious cloaks and capes for like, what, a decade now? So I was kind of hoping to see a little more from them. Instead, they’re both serving middle school pottery teacher realness. I’m willing to bet on my most-liked Instagram photo that at least one of them is wearing Birkenstocks underneath all of that. Also, why is one twin aging exponentially faster than the other??

Guys, is Selena Gomez ok? She came to the fucking Met Gala rocking a spray tan by Tan Mom and a nightgown. This dress looks about three sizes too big on her, and I’m 1000% sure her boobs are not actually that big/saggy. Coupled with the hairstyle that closely resembles a tangled up mop, I’m going to put out a theory that she literally just rolled out of bed and onto the red carpet.

Forgive me father, for I have sinned: one time I watched the Katy Perry movie, and I cried. Ugh, Katy. Didn’t you hear? This is not the auditions for the Victoria’s Secret Fashion Show! I know the Met Gala is all about being extra, but every single thing about this outfit makes me want to scream. Serious question: Do I hate Katy Perry because she’s tacky, or is she tacky because I hate her?

It was really nice of Ceelo Green to lend the dress he wore to the 2017 Grammy Awards to Lena Dunham. All jokes aside, Lena looks like a washed-out extra from Shakespeare in Love. At least that hood/collar/creature around her neck looks like it would make an excellent pillow. Oh, did I say “all jokes aside”? Oops.

Honestly, I’ve been staring at this photo for like, 10 minutes and I’ve got nothing. I haven’t been this lost since I tried to spell Cara’s last name without the help of Google (aka about 30 seconds ago). Wait, I got it: This is the outfit you wear to the funeral when your sugar daddy dies. Right?

Fucking duh. Has there ever been an event where Rihanna wasn’t the best dressed? No. Robyn Fenty is the Pope of everything important, and we shouldn’t have expected anything else. Should we just rename the Met Gala to the Rihanna Gala? I’ll draft up a petition.

The only thing wrong with this look is that it’s almost impossible to make a meme out of it. Hailee stuck to the theme, but still looks effing amazing. With every passing award show, red carpet, and lack of nude photo scandal or age-inappropriate boyfriend, Hailee Steinfeld continues to impress me with how well she’s handling fame at a young age.

SZA looks PERFECT. Like, her dress is angelic and her boots are slaying. Plus, her hair and makeup is so insanely flawless that she literally looks like a Bratz doll that got her shit together and became super successful. I feel like a proud mom.

Cardi B can do no wrong in Fashion Nova, so obv the entire world is dying over this Moschino look. I can’t wait to buy a candle with a photo of Cardi from this year’s Met Gala on it at some dingy store on Canal Street. Shit, maybe I shouldn’t have said that before I got the chance to launch my new Etsy store.

How did Zendaya wear her hair in a weird little ginger bob with bangs and still look amazing? Not sure. She’s officially the eighth wonder of the world. Cue the Zendaya vs. Shailene Woodley “what you order online vs. what comes in the mail” memes. I haven’t watched Game of Thrones since like 2014, but I have a feeling Zendaya is going to show up and kill everyone next season.

Wow, Serena van der Woodsen has come so far from eating yogurt on the steps of the Met. (I know I’m the 400th person to make that joke today, leave me alone.) Blake just looks stunning as fuck, and I love her so much. Also, I feel like all these bejeweled halos/crowns/tiaras were made by one old gay man who definitely has carpal tunnel syndrome now.