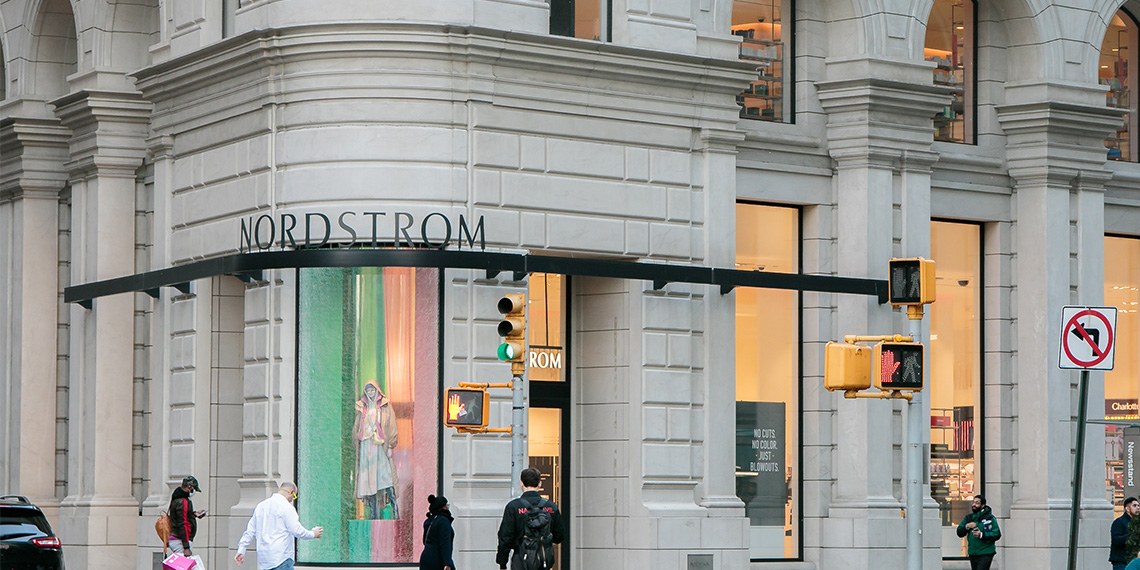 Nordstrom Is Paying Influencers To Say Their Stores Are Safe

In 2020, it really feels like we’ve seen it all. This is the year of COVID, murder hornets, bubonic plague, and worst of all, Nickelback is making a comeback. But back to COVID—while the pandemic rages on, lots of places are navigating reopening, with varying levels of precautions in place. In most places, including New York City, stores have reopened their doors in the last month or so, but it’s understandable that a lot of shoppers don’t feel completely comfortable yet, especially when you can buy pretty much anything online.

But if stores are going to spend their resources on having their physical stores open, it makes sense that they want those stores to be bringing in the cash. Now, brands are using their resources to get customers shopping in person again, with big in-store sales and ads announcing their reopening. And Nordstrom is taking things a step further with an interesting strategy to lure customers: in a new campaign, they’re paying influencers to post about how safe the stores feel. Yes, really.

Here’s a sponsored post from Wendy Nguyen, a fashion blogger with over a million followers. Photographed wearing a mask in Nordstrom’s NYC flagship store, she writes in the caption that her visit to the store was “so refreshing,” and that “everyone was wearing masks, practicing social distancing, and incredibly kind.”

I haven’t been out in months and this visit to @Nordstrom was so refreshing. Everyone was wearing masks, practicing social distancing, and incredibly kind. Even shoppers, strangers as we were, stopped and had meaningful conversations. I think we just all miss the human contact. And miss seeing pretty shoes and bags too 😍😍😍 #nordstrom #sponsored

Nguyen also said that she had “meaningful conversations” with other shoppers, which sounds like my worst nightmare, but sure. I didn’t like small talk before, and I definitely don’t need to chit chat with randos now!

Another influencer, Aïssata Diallo, wrote in her sponsored caption that Nordstrom is “a destination of discovery which you simply cannot experience online.” Lol, the way these people talk about a store makes me glad I’m not a fashion blogger. Diallo noted the sanitizing stations throughout the store, and said she felt “sooo comfortable + safe knowing the safety measures Nordstrom has taken.”

𝗧𝗵𝗮𝘁 𝗳𝗲𝗲𝗹𝗶𝗻𝗴 𝘄𝗵𝗲𝗻 𝘆𝗼𝘂’𝗿𝗲 𝗳𝗶𝗻𝗮𝗹𝗹𝘆 𝗮𝗯𝗹𝗲 𝘁𝗼 𝘁𝗮𝗸𝗲 𝗮 𝘁𝗿𝗶𝗽 𝘁𝗼 𝘁𝗵𝗲 𝘀𝘁𝗼𝗿𝗲 𝘄𝗶𝘁𝗵 𝗽𝗲𝗮𝗰𝗲 𝗼𝗳 𝗺𝗶𝗻𝗱> – More than a store, @nordstrom is a destination of discovery which you simply cannot experience online. Store highlights include Nordstrom x Nike (Level 1), the art throughout the store, and the pink Ettore Sottsass Mirror (Level 2) just to name a few! #Nordstrom #Sponsored – I absolutely appreciated the sanitizing stations that was at every corny. It made me feel sooo comfortable + safe knowing the safety measures Nordstrom has taken 🥺🙌🏾

For the new campaign, Nordstrom teamed up with marketing company Captiv8, whose founder Krishna Subramanian spoke to Business Insider about the collaboration. Subramanian sees the campaign as a “natural extension” to previous “social good” initiatives about brands making masks and supporting frontline workers, which seems like a stretch if you ask me. I must be missing what donating PPE to hospitals has to do with being able to buy a new pair of Louboutins in person. Subramanian says the new posts draw on the “trust and emotional connection” influencers have with their audiences, and that they can create “wish you were here” moments that will hopefully drive customers back into stores. So far, Nordstrom is the only brand to employ marketing tactics like this, but Subramanian said that his company is currently working on similar influencer campaigns for other major brands.

While Subramanian said that these types of posts offer “transparent views on retailers that are opening,” I’m not sure I really want to get my safety information from someone who’s being paid specifically to say positive things. Like, do you think the Kardashians actually believe any of the shit they say about Flat Tummy Tea? Everyone knows that advertisements should be taken with a grain of salt, so maybe COVID precautions aren’t a topic where we should be taking the advice of influencers being paid to share a specific message. I completely believe that these influencers felt safe at the store. Fun fact: I’ve been to the Nordstrom flagship recently, and I felt safe too (and I’m not being paid to say it). But when it comes to decisions about going back out in the world and resuming our normal activities, we should probably pay more attention to actual safety measures, and not the influencers on the company payroll.