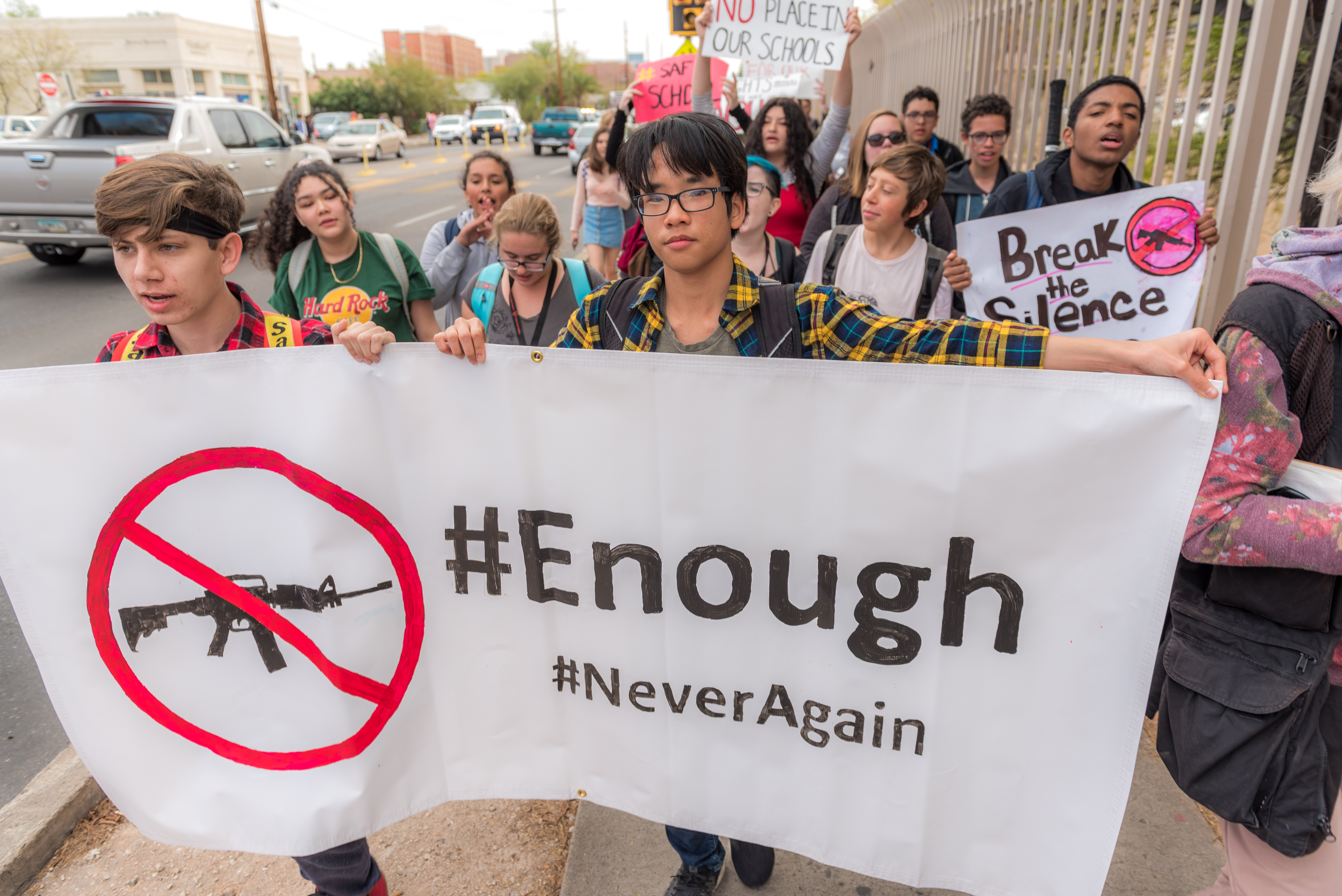 Let me paint you a picture: just over a month after the horrific deadly shooting at Marjory Stoneman Douglas High School that killed 17 and wounded many more, lawmakers have made great strides in passing new gun violence prevention laws and making the protection of our citizens and children a top priority. There is peace and unity across party lines. Instead of guns, we use our words to get our message across. Everyone is safe and sound, and no March For Our Lives is needed. Obviously, that’s a load of fairytale bullshit. I mean, have you seen the news?

If you’re fed up with the lack of common-sense gun safety laws and want to do something about it, the students of Parkland have got ya covered. This Saturday, March 24th, is the March For Our Lives, organized by the survivors of the Florida shooting to speak out against gun violence. While the main march is in Washington D.C., there are plenty of other ways to get involved wherever you live all across the country. So delay that Saturday morning hangover for one more day – there’s important activist shit to do.

Find A March Near You

Unless you have a ton of frequent flier miles or unlimited money for bus fare, you probably won’t be able to hop over to D.C. last minute to join the official march (and if you do have those things, hit me up. This bitch needs a vacation). Luckily, there are dozens of sister (yes – the march is a woman) marches organized in different cities, so there’s bound to be at least one that’s accessible to anyone who feels like joining in.

Click here to find a march near you, and start prepping your witty protest sign now so you can get a bunch of likes on Insta from all the people impressed with how woke you are. (Make sure to tag @MarchForOurLives and @Everytown, and use the #MarchForOurLives hashtag!) I’ll offer my sign suggestion, since I’m feeling extra generous: “The only guns that should be allowed in this country are Michelle Obama’s!” You can have that idea for free, folks.

Pick Up A Copy Of Time Magazine

Yes, they still make print magazines that you can actually physically flip through instead of scrolling past some tweeted quotes from an article. How retro. Time‘s new cover features five of the Parkland shooting survivors looking hella badass and like a squad of teens from a Marvel movie who are about to reveal their superpowers and save the world. These students are not far from actual superheroes, and their intelligence and maturity is definitely worth reading about.

Following the widely successful walkout a few weeks ago where thousands of students of all ages left their classes and stood in solidarity emphasizing the need for common-sense gun safety laws, another walkout will be held on April 20th. This is the anniversary of the Columbine shooting, which is one of the first mass shootings we millennials can remember. It goes without saying that this date is often significant for another reason, so let’s just hope that everyone can muster up the energy to slowly walk out, maybe with an added sense of calm and Bob Marley’s “Everything’s Gonna Be Alright” playing in the background.

In conjunction with the walkout, The Sup will also be engaging in a Facebook blackout on April 20th, standing in solidarity with the students, and also protesting Facebook’s social abuses and the spread of fake news. You can join us by turning your profile picture and cover photo black and not posting anything for 24 hours. Honestly, social media is a cesspool and only leads to getting mad about politicians’ tweets or FB stalking an ex so, like, you’re only doing yourself a favor by logging off.

GoFundMe is the charity of the future. On crowdsourcing alone, the Stoneman Douglas Victims’ Fund has already raised over $4.5 million to provide relief and financial support to the victims and their families. No donation is too small, but just make sure you only donate to verified pages, otherwise you might be paying for some scammer’s new yacht, and that is definitely the opposite of charitable goodness.

We’ve said it before and we’ll say it again: nothing is going to change unless we get legislators to listen to what the people are saying. You can reach your local representative by calling (201)-224-3121 and asking for the lawmaker in your state. Or, you can just go down this list of legislators who voted no to expanding background checks and making it harder for people to purchase guns. Turn it into a drinking game: take a shot for every senator you get to bitch out, and chug your drink if it sounds like they might actually change their stance.