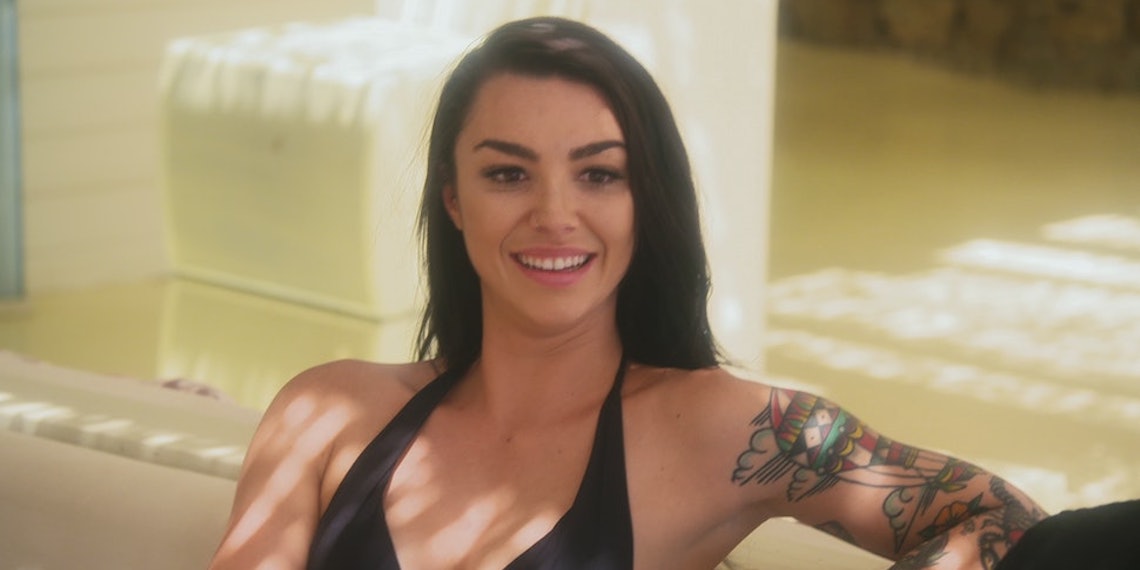 Welcome back to another week of Lindsay Lohan’s Beach Club. This week, MTV has conveniently moved the show to Monday, so it directly conflicts with both Vanderpump Rules and The Bachelor. This is really proving my dedication to Panos and Lindsay. Tonight we’re getting two new VIP Hosts, and Lindsay will decide what to do with Jonitta and Gaby after last week’s fight. Should be a good episode!

We pick up where we left off, with Lindsay and Panos arriving at the Host villa to deal with Gaby and Jonitta. Jonitta is wearing a shirt that says “LIKE, REALIZING STUFF,” which I flat-out need in my life. Lindsay is in full conflict mediator mode, and she explains in her thickest fake Russian accent: “You popped off. And then she popped back off.” I’m on the edge of my seat.

Jonitta interrupts Lindsay while she’s talking about the Lohan brand. That’s definitely not allowed. And now Lindsay is crying because women all need to stick together. Glad to see she believes in Lala Kent’s brand of feminism.

Gaby and Jonitta hug it out, and that’s the end of the meeting. I have never been more underwhelmed in my life.

But now Lindsay is sitting down with all the hosts, and says she might just say f*ck it and send everyone home. Yeah, that’s not gonna happen. Lindsay tells a story about how one time she was 30 minutes late to a film set and she got yelled at. I’m pretty sure she’s describing every single day of her career, but ok.

Aaaaand everyone gets to stay in Mykonos! Lindsay tells the hosts that she asked Oprah for her advice about this situation, so take a shot for that name drop. The hosts are like “What did she say??” and Lindsay just says that Oprah is the coolest person ever. This definitely means that Oprah didn’t respond. Panos is mad that no one got fired, but this is all about the Lohan brand.

It’s the next day, and the Hosts gather for a staff meeting at the club. We’re told that this is day 11 of them being in Mykonos, which is fully insane. This show is definitely aging me.

Panos is wearing a rainbow leopard print vest, which feels correct. Jonitta and Gaby are partnered together for the day, because of course. Lindsay thinks they’re gonna be best friends now, because she’s naive and doesn’t understand adult relationships. They’re assigned to the VIP clients for the day, Terrence J and Jasmine. I hate Jasmine immediately, because she’s the prettiest person I’ve ever seen.

Terrence J gives Jonitta a weird unprompted pep talk about being an adult, and Jonitta blurts out that she got in an altercation with Gaby. Jasmine and Terrence help the ladies talk things out, and then Terrence sends Jonitta to look for seashells on the beach. Yeah, sure, why not.

The VIPs want some weird drink with a pineapple infusion, so Panos sends May to the kitchen to ask about it. She really struggles to figure out this drink situation, and somehow annoys Panos, Gaby, and Brent in the process. She’s not doing great, but Jonitta has successfully found some seashells for Terrence, so she’s really killing it today.

The VIP Hosts are on their way home, and Mike asks if May washed the dishes earlier. May says no, and suddenly Mike is full-on yelling at her in the back of the car. That escalated quickly! Clearly the producers have decided that this is May’s episode to get dragged through the mud, and it’s only a matter of time before she explodes.

They get back to the house, and Mike and May are still screaming at each other about the dishes. If I cared this much about washing dishes, I would’ve thrown my roommates into the f*cking ocean by now.

Jonitta: That van has a curse on it.

Now May is mad at Jules for not sticking up for her in the van. This is a good reminder that Jules is still here. Who knew! Meanwhile, Brent and Sara are getting hot and heavy again, because apparently she forgot that he called her “the gum on the bottom of his shoe” less than 11 days ago. I have no hope for these people.

Brent: I don’t like odd numbers. So you either have to kiss me twice or four times.

Now everyone is arguing again on the patio, and May just called Jules a fake-ass bitch. Aristotle says this is all crazy, because Lindsay is all about women’s empowerment. Nice try Aristotle, but Lindsay is actually all about the Lohan brand. Mike is literally screaming at May, and I’m truly not sure why. Is this still about dishes??

It’s a new day all of a sudden, and it’s time to meet our two newest VIP Hosts. There’s Kyle, an NYC bartender, who’s here to “make Lohan Beach House the sh*t.” Cool. The other new Host is Kailah, who was on a random season of The Real World in 2016. The old Hosts arrive, and Panos tells them they’re all on notice. Ooooh, scary.

The VIPs today are three models, Christina, Ctefania, and Alisa, who allegedly have millions of followers. Brent, Kailah, Kyle, Jules, and Jonitta are assiged to the VIPs, who must be the most high-maintenance people on the planet. Kailah already hates Brent, and I’m so glad to know she has taste. She thinks it’s ridiculous that Brent and Sara are dating, and I can’t believe she has rational opinions.

The models arrive, and they’re hot, of course. Brent feels like he’s being “baited,” but why would there not be hot girls at a beach club in Mykonos? That’s kind of the whole point. Lindsay says she’s always watching, which means paying attention to who’s flirting with whom. We see Brent giving one of the VIPs a massage, and surprise! Sara is pissed. As much as it pains me to be on Brent’s side, he’s literally just doing his job. He’s not sleeping with them. Kailah says Sara should get sent home, and I love that she’s not here to play around.

Panos is unhappy with Jules, May, and Sara. Will anything come of this? Will someone finally get sent home? Well, the Hosts are headed home for the night, so I guess that’s a no. When we get to the house, Brent and Sara are arguing about how their relationship is affecting their jobs. Sara thinks maybe they should cool it, and Brent storms out of the room. Okay, I’m back to hating Brent, that feels better. Sara and Jonitta decide to throw Brent’s sh*t out of the room, and I’m living for every second of this.

Sara: I’m worried this is affecting our jobs.
Brent:

When Brent finds out, big surprise, he’s pissed. He reacts by throwing all of Jonitta’s clothes of the room, which she doesn’t love. Best quote of the night: “If I didn’t just smack a bitch two days ago, I swear to god you’d be my next f*cking victim.” Aaaaand Brent just dumped Sara’s clothes all over her head. Kailah takes credit for planting the seeds of doubt in Sara’s head, and compares herself to Regina George. I’ll say it for the second week in a row: I love this episode of Bad Girls Club.

The next day, Panos and Lindsay meet with each other to talk about the drama with the Hosts. She says she had a lot to think about, and that’s the end. Will someone FINALLY get fired next week? It really seems like it, but who knows at this point.