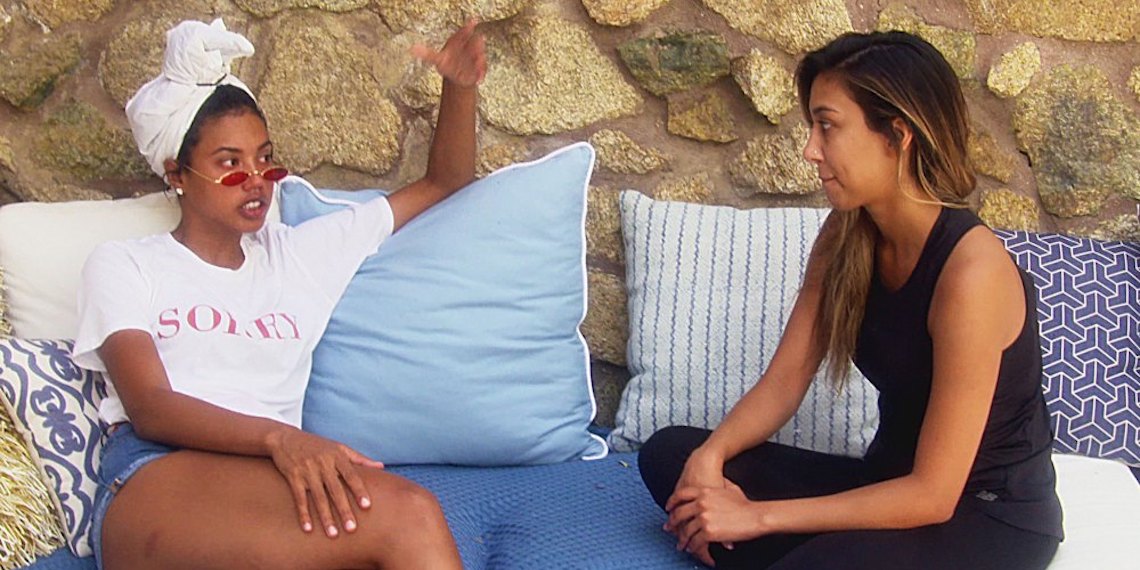 It’s been a long week since we were last in Mykonos with Lindsay and the gang, but I’m ready for more. When we left off, new VIP host Alex had just showed up, and Lindsay and Panos seemed like they might be ready to send someone home. Will this actually happen, or is MTV just baiting us? Stay tuned.

We start off with Lindsay in some kind of wet suit electrode contraption, and I think she’s literally getting shocked. She shouts that she’s not Tomb Raider, which has…nothing to do with anything. And none of us thought that to begin with. She says that she’s noticed the VIP hosts getting more comfortable, which can only mean that something is about to go horribly wrong.

Panos is leading the staff meeting, and right now his favorites are Alex, Jonitta, and Brent. I’m definitely team #CancelBrent, so this is gonna be tough for me.

Big Shaq, who is apparently a famous rapper, is the VIP for today, and Billy is assigned to his cabana. Panos also tells the hosts to come up with ideas for a signature drink, which seems like really not their job? Lohan Beach House needs to call Tom Sandoval for some consulting. Billy makes a drink that everyone agrees is ~perfect~ even though I’m pretty sure it’s just an Aperol Spritz. But big drama is brewing, because Panos likes Gabi’s drink better.

We get a quick glimpse of Lindsay getting her makeup done, and she barks out “The struggle is real!” First of all, you mean to tell me that all of these terrible makeup looks have been the work of a professional makeup artist?! Fire this person! Also, what struggle? Lindsay’s life seems like it would be inherently easy if she could just get out of her own way.

Right now Panos has three problem hosts: Brent for his attitude, Jules because she’s too quiet, and May, just in general? I’m sure we’ll get more on this later, but for now Panos is busy flirting with Big Shaq, who just showed up.

It’s 5pm at the club, and Jonitta is f*cking fed up with Gabi. The feuds on this show come out of nowhere, but I guess I’m here for the drama. It’s time for Big Shaq’s performance, and he immediately brings Lindsay up on stage. Lindsay is wearing an entirely gold sequined dress that says “TOO GLAM TO GIVE A DAMN,” which cost $459 according to some quick googling. Sure, sounds good, love it. I’m not familiar with Big Shaq’s music, but the first lyrics we hear him rap are “2+2 is 4,” and for that reason, I’m out.

Back at the house, Mike is telling Alex about how he wants to bang Jules, mostly because he hasn’t sex in four months. Alex is not convinced, because he says Mike is gay, not bi. Um, rude, but I also seriously think they’re gonna hook up at some point, despite Alex having a boyfriend at home.

Gabi tells us a sob story about childhood health problems, which I didn’t really listen to because I was getting a snack. Sorry, not sorry. They’re really trying to make Gabi happen this episode, and idk if I’m feeling it. No wait, I know I’m not feeling it. Jonitta invited a guy from the beach club to go out with her tonight, so that hopefully he’ll be a VIP client in the future. Things start to go south when Gabi and May greet Jonitta’s date first, and then Jonitta is sh*t talking Gabi to anyone who will listen.

Remember my prediction exactly six sentences ago that Alex and Mike would hook up? Well, apparently I’m psychic, because they just drunkenly made out at the club! I’m obviously not surprised, but I kinda thought they’d make us wait longer?

Now we’re back at the house, and Jonitta confronts Gabi about how she greeted her date. Ugh, I’m so over this already. May, despite doing the same thing as Gabi, has somehow avoided the wrath of Jonitta, and she should be thankful. Gabi brushes against Jonitta’s leg, and Jonitta responds by slapping the shit out of Gabi. Wow, I love this episode of Bad Girl’s Club!!

Security is ready for this to get bad at any minute, and Gabi has to beg the cameras to leave her alone so she can have a minute to herself. She feels like she’s being attacked just for doing her job and being personable, which is pretty accurate. I like Jonitta, but I’m not sure this behavior is in line with the Lohan Brand. Which is why we’re all here. Gabi is feeling alone and doesn’t want to deal with anyone, so she leaves to spend the night at a hotel. Wait, this is an option?

The next morning, Mike and Alex sit down to chat about their kiss. Alex is like, “wow this could ruin everything between me and my boyfriend.” Mike plays along, but you know he would sleep with Alex in 10 seconds.

We see Panos watching the footage of Jonitta hitting Gabi, and he’s not happy. He first has a meeting with Gabi. Panos says “I don’t know how to control Lindsay in this situation,” and I’m confused. Is Lindsay not the boss? Why wouldn’t she already know? Shouldn’t she be at this meeting? Panos then shows up at the host villa, and calls everyone into the living room. 30 seconds into the meeting, Jonitta tells Panos that Gabi is a “thirsty little girl.” She’s wearing a shirt that says SORRY, but clearly she doesn’t dress the way she feels.

Panos goes to call Lindsay, and he kicks a stool in the kitchen on his way out. Iconic drama queen moment right there.

Sara goes to talk to Jonitta, Brent gives a speech about how he would’ve been so humble in Jonitta’s position (sure, Jan), and Alex leaves to meditate. Same. Jonitta tells Sara she’d rather get sent home than apologize, which is literally so dumb. Just say sorry, you don’t even have to mean it!

Gabi gets back to the host villa, followed closely by Lindsay and Panos. Lindsay says violence is unacceptable, but what’s even more unacceptable is the denim dress she’s wearing. They sit down for a meeting, and…CLIFFHANGER. Ugh. Will Jonitta get sent home? I guess we’ll find out next week!