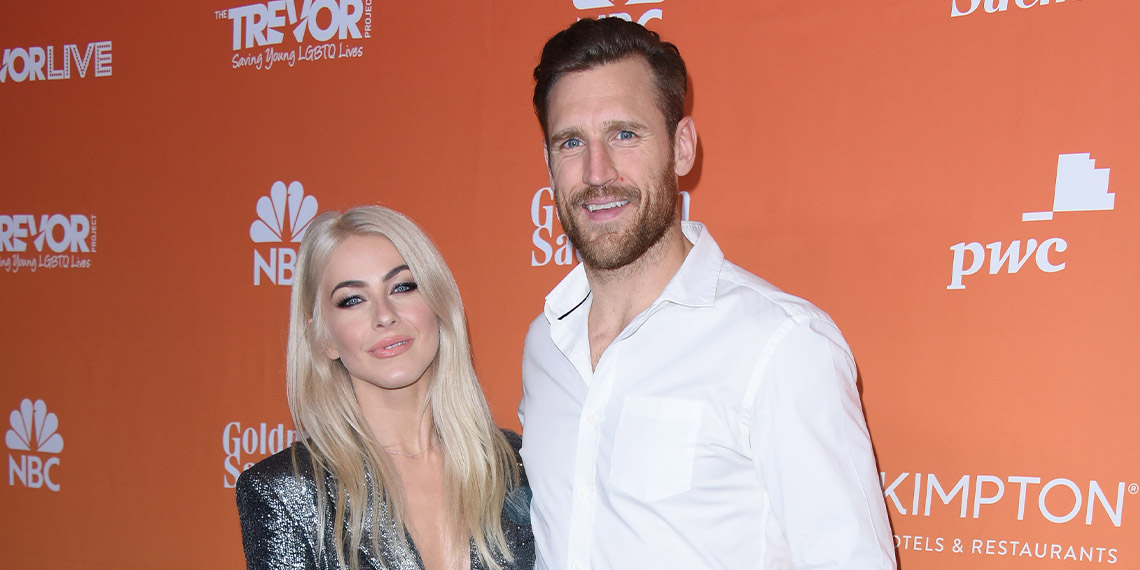 UPDATE: We’ve already seen our fair share of celebrity quarantine breakups, but this latest one is probably the least surprising. On Friday, Julianne Hough and Brooks Laich announced they’re separating after nearly three years of marriage. After a solid three months of news ranging from stressful to horrifying, finally something we all predicted!

As we discussed before, Julianne and Brooks have been social distancing hundreds of miles from each other, and they confirmed their separation in a joint statement to People: “We have lovingly and carefully taken the time we have needed to arrive at our decision to separate. We share an abundance of love and respect for one another and will continue to lead with our hearts from that place. We kindly request your compassion and respect for our privacy moving forward.”

This is a pretty run-of-the-mill separation announcement for a relationship with as many messy tabloid headlines as this one, but it’s not surprising. When will one of these celeb couples cut the “lovingly and carefully” bullsh*t and just tell us that they hate each other? Sorry, but no one “lovingly” decides that they never want to see their husband again. And we’ll see how long the privacy stuff lasts once Brooks needs something to talk about on his podcast.

A source tells People that “it’s been over for a while” (no sh*t), and that they don’t hate each other, but they finally “they are not meant to go through their lives as husband and wife to each other.” Again, no sh*t. It’s felt like it’s over between Jules and Brooks for a while, and now we just have confirmation. Now that they’re separated, with a divorce likely on the horizon, we probably have two more good years of wild tabloid headlines to look forward to. Lucky us!

For the most part, the last couple months of quarantining have been pretty boring. The news is depressing AF, and with nowhere to go, we’re all just bored in the house. But the silver lining of quarantine has been getting a glimpse into some very interesting celebrity arrangements. We’ve seen lots of new couples getting more serious, but in the case of Julianne Hough and Brooks Laich, an already questionable marriage dynamic has become wildly messy.

Julianne and Brooks got married in 2017, and honestly, I never gave them the time of day. Hockey dude married to ballroom dancer-turned-fitness guru? Thanks, I’m good. But since the beginning of this year, their marriage has been a hot tabloid topic, and I’m officially fascinated. It’s still unclear exactly what’s going on here long-term, but I’ll do my best to unpack what’s been happening lately.

At the beginning of January, Us Weekly and People both reported that Julianne and Brooks were going through some marital issues.  People quoted two sources close to the couple, who said that they had “been having problems for months,” but “are not giving up.” The same day, an “insider” told Us Weekly that the couple had issues in December, adding that “Everyone knows something is up.” Drama! Considering that the two biggest tabloids reported this the same day, it wouldn’t shock me if it was an intentional leak, but either way, things didn’t seem great. Around this time, Julianne was seen without her wedding ring several times, including while hosting NBC’s New Year’s special, so these sources just added fuel to the fire that there were issues between the two.

The day after the tabloid stories broke, Hough and Laich were photographed hugging, so we know they weren’t like, not speaking. A couple weeks later, Laich shared on his podcast (which he cohosts with Gavin DeGraw) that his 2020 goal was to learn more about his sexuality. He added that he doesn’t feel “100 percent fully expressed in true sexuality” with Julianne, which feels like a sh*tty thing to say about your wife to the audience of your podcast. Brooks, my man, bring that energy to couples therapy!

A few days later in an Instagram post, Brooks said that his new motto is “But First, Happiness.” Wow, the “but first, coffee” crowd on Etsy is shook. In the post’s lengthy caption, he said a whole lot of nothing, about how “I’m redefining my priorities, and putting happiness at the forefront. I’m making changes to my daily routine, and prioritizing the things that bring me the most joy.” Okay, are we talking like, doing the dishes as you cook, or leaving your wife? Brooks, this is vague AF.

My new motto. Lately I’ve been re-assessing many things in my life, and one of the most important things I’ve been looking at is how I spend my time every day. I’m redefining my priorities, and putting happiness at the forefront. I’m making changes to my daily routine, and prioritizing the things that bring me the most joy. Everything else lines up behind those. This is the first week of this new approach, and so far I’m absolutely loving it! I’m gonna play with it some more, dial it in, and then share with you what my day looks like. I’m sharing this with you to encourage you to assess your life, how you are spending your time, and what you are prioritizing daily. Do you wake up with a “to-do” list every morning, or do you wake up and do things that bring you complete and utter happiness? I would love to hear your thoughts on this as it pertains to your life, please share them with me below! 🤟💯 #happiness

I’ve never really paid much attention to Brooks Laich before, but I’m getting the vibe that he and I would not get along. I can’t stand people who speak like this, and it all just feels fake to me.

After this rough patch at the beginning of the year, things seemed to be back on track last month. On March 21st, People reported that the two were social distancing together at home, and their source said things seemed to be going better in their marriage: “They actually seem to have figured out how they can stay married. Both have had to make changes, Brooks especially so.” BROOKS ESPECIALLY SO. That is shady as f*ck, and I love it. Why do I feel like this quote is coming directly from Julianne?

But the alleged quarantine bliss didn’t last too long. Around the first week of April, Brooks relocated to his home in Idaho, ignoring the fact that it’s like, very uncool to travel right now. Then, on April 16th, Julianne Hough was seen walking with actor Ben Barnes, because why not get a new quarantine bae once your husband peaces out to Idaho? The next day, a source told Us Weekly yet again that the couple were “not doing well” in their marriage. Yeah, I could’ve guessed from the fact that Brooks literally left in the middle of a pandemic, and then Julianne was seen hanging out with another dude.

Last week, both Julianne and Brooks were eager to share how great their separate quarantines were going. On another episode of his podcast, Brooks talked about how he loves spending more time in Idaho, where he can spend time in nature and just like, chill. He also talked about having “a buddy that I can go hunting with,” which doesn’t sound like an essential outing to me, but I don’t have time to dwell on that. On the same day, Julianne told Oprah Magazine that she and Brooks “are doing our separate things right now,” and that her time alone in LA has been “magical”. I’m just gonna call bullsh*t, because I really don’t believe that these last two months have been magical for anyone. Peaceful? Maybe. Insightful? Fine. But no one is living their best life right now, I’m just not buying it.

Then, on this week’s episode of his podcast, Brooks talked about his quarantine situation again, this time sharing that his sex drive has been low since he’s been in Idaho: “It’s all Idaho bush, I’m cutting down trees, clearing brush. After that, I took supper and I make a fire and then I’m wiped out, I really don’t have a sexual charge, I’m so wiped out. During this quarantine time, I’m not in the proximity to my wife. I’m not in the same room with her, and with what I’m doing here, that my sex drive wouldn’t be at its peak.”

Sex drive problems aside, I don’t see this marriage suddenly working itself out once quarantine is over. Especially with the travel restrictions in place, now would be as good a time as any to stay in the same place and actually get to the bottom of your issues. Instead, Julianne and Brooks are hundreds of miles apart, and according to them, they couldn’t be happier with this arrangement. I’m no relationship expert, but it might be time for these two to cut their losses. At the very least, that would give Brooks another year’s worth of sh*t to talk about on his podcast. Do I… do I need to be listening to this podcast? If we’re in quarantine for another month, I just might have to.