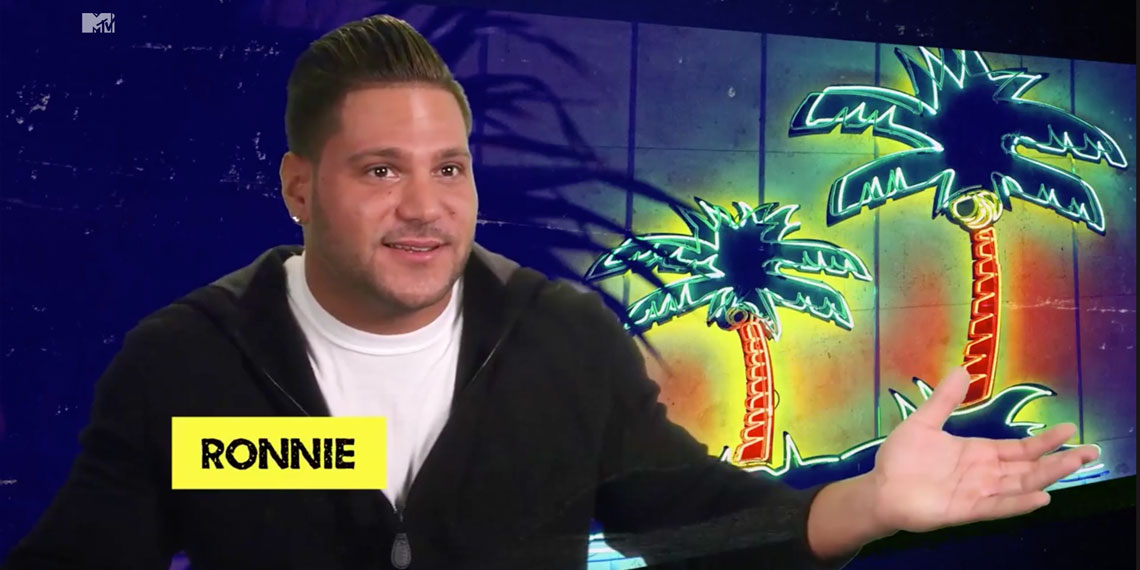 Back in the land of toilets and screaming, Snooki is still berating J-Woww, and I just hope she gets punched in the face to end this. Like, go yell at Vinny, the guy that actually caused the problem. Time to hold men accountable for their fucking actions #feminism. Snooks calling Jen an idiot 400 times just makes me feel bad for Jionni, like clearly she thinks this is totally acceptable.

Jenni: Don’t call me an idiot, because I’m mostly sober except for my friend, Tequila!

Me too, girl.
Vin is stilllll fucking whining. He’s like, “she wanted to fuck me eight years ago, so why can’t I force my dick into her face?” I’ve gotta say, though, watching that flashback of Snooki jumping into Vinny’s bed and slurring incoherently was hard to watch. Mainly because it reminded me of myself in college.
Vin: I just miss me and Nicole because… we’re friends.
Snooki’s threatening to leave for the—what—fourth time now? How long has this show been filming in real life? Like two days? I love that Snooki tells Pauly that there have to be boundaries, and yet when Vinny explicitly asked her what their boundaries are she yelled at him……
I really wish I had a hot tub. I would definitely be like Vin and take a casual soak in the middle of a huge fight.
Are….. are… Snooki’s lips lower on her face than they used to be? Is that possible? Is this a thing surgery does to you? It’s just… every time I see her I feel like her lips are like sliding down her face. Someone please advise.
Like. There is nothing weird about her lip placement right here:

Are they not lower? Also, I can’t get used to her new accent. Surgery? New teeth? What has happened?

K, now Snooks and Jen are crying and everything’s fine. All it took was for Jenni to walk into the room, literally. Relationship goals. Maybe I’m just fucking mean, but if you call me an idiot I will 1) punch you in the fake lips 2) never speak to you again. You will be dead to me.
I forgot Deena was here. Deena, do something interesting.
Okay, Vinny is so serious when he says that Nicole won’t sit by him. Vinny. You were attempting to hump her face. You were not just sitting next to her. Why is no one bringing this up? Oh fuck, that’s right that Vinny has a girlfriend. She must be thrilled about this scenario. Like, I can just imagine them sitting next to each other right now watching this shit. Snooki being like, “oh my husband is fine with you.” I mean, yeah, he was fine when you fucked Vinny when you were still together, so yeah, I can’t imagine much else bothers this guy.
Ooooooooh shit, Mike’s own fucking brother sold him out to TMZ? Tbh, I was only half paying attention to this part because they’re sober, in a car, going to the gym—all things that I never do because they are deeply boring to me. K, so Mike’s brother also evaded taxes (allegedly) and also got fucked (allegedly) and now they aren’t speaking (allegedly) because he sold his info to TMZ (allegedly)? Their parents must be so proud. Allegedly.
Deena laying out at the beach saying “fuck the gym” while everyone else goes to work out is my summer mood. Can we all agree that the gym sucks and not go anymore? If everyone else is fat then technically none of us are fat.
How much you want to bet me that a GTL workout video is coming out soon? That is basically half of these episodes, them at the gym. I wouldn’t fucking do it.
Oh wait, unless it’s of Mike’s workouts, eating while slowly walking on the treadmill. That I will do.
What the actual fuck, how hard up is Ronnie if he’s coming onto a watermelon? This is pornographic, stop it.
Snooki: Ron Ron Juice is like jungle juice from high school.
From high school??? I wasn’t exposed to jungle juice until college. What kind of high school is this?
Ronnie: I don’t give a fuck about Sam. *slowly hides Robot Sam behind his back*
All of us:

Ronnie, you’re fucking obsessed with Sam. Stop talking about her k. Oh, Ronnie, you called Sam on blocked numbers? That’s okay, I did that too, right before I was served with a restraining order. (It was temporary, so it’s fine.) But I still did not try to fuck a watermelon, soooo…
I actually laughed when Vin called Mike a gay farmer. I’m sorry, that is offensive to gay men, they don’t dress that shitty ever.
Ronnie calls Deena sweetie and she loses her shit, I love it. Now he’s like, “you’re right, you’re a two-faced backstabber.” Boy, that escalated quickly.
OMG, Ronnie, are you seriously digging for info about whether Sam is talking about you? That is sooooooo sad. Ok, imagine Ronnie’s baby mama watching this with HIM right now. THAT is fucking awkward.
Sidenote: Jenni still is dressed like a grandma who is into role play and is pretending to be a sexy librarian. It’s upsetting me.
Ronnie: Ok, call Sam and tell her! Call Sam! But like, can you call Sam? Someone? Please fucking call Sam???
^Spoken like a true person who is over their ex.
I was going to make a comment on Mike’s doing The Matrix to dodge booties thing, but honestly, I have no words.
Jenni is going all you-can’t-sit-with-us on rando girls. Kinda think it has more to do with the free bottle service than you guys. Don’t get cocky. Fucking love Deena throwing the drink in her face, and also, what the fuck, the girl tried to hit her back in the face with a bottle of champagne? Girl, you need to DRINK the champagne first. What a waste. Librarian Jenni just hit on girls for Pauly and invited them to bottle service. To be clear, is this not why we fought with the other girls a second ago?
Ronnie: I LIKE GIRLS THAT HAVE BREASTS HER SHIRT IS SEE THROUGH NOT A BAD SITUATION HI SAM
Actual footage of Ronnie looking at breasts:

Again, Ronnie watching this with his GF RIGHT NOW.  Oh cool, he’s touching this rando’s vag. Oh cool, he’s inviting her home. Cool cool cool cool cool. Ronnie legit loads up the van like a fucking clown car to get all these Russian hookers home.
The car is literally stuffed and Deena’s like, “are people coming with us?” Nothing gets past you, honey. Detective Deena on the case. Ronnie is unloading the hookers into the hot tub. How, how could this go wrong?
Jenni: Do you have condoms?
Ronnie: I’m not fucking them, relaaaaaaaaaaaaaaaaaaaaaaax.
I’m starting to see how he conceived his child. Oh good, the hookers are stripping. Beginning to suspect these ladies were actually paid for by the producers.
Snooki: I’m gonna get these girls hammered so it lowers their inhibitions and then nothing bad will happen because they will take a nap.
Sure, I’m sure this won’t go wrong.
Vinny: There are naked girls in the hot tub, so even though I have a girlfriend, it’d be rude not to get in and ask them about their breasts.
Vin has become a major creep this season. Like he is actually grossing me out. Didn’t he used to be the most normal one on the show? Maybe The Situation was so creepy, I didn’t notice how gross Vinny was? Unclear.
Vin: Why was your shirt see-through?
Nipple Girl: Because I have nice breasts.
That kind of made me like her a little bit. Yas girl, you do you.
I love how Jenni, Snooks, and Deena are sitting in PJs, drinking, and judging the entire thing. Stars, they’re just like us! Ronnie is groping Nipple Girl’s ass. A drunk bitch is puking on the sofa. Snooki feels like it’s her fault—yes, it’s FUCKING DEFINITELY your fault for liquoring her up more on purpose. Oh good, she has class in the morning. I am soooo embarrassed for this girl. She should have never signed the waiver to show her face on this show.
Ronnie is pulling aside Ms. Nipples. “You could get me in trrrrouuuububblllele,” he slurs seductively in her ear. (Incidentally, that’s almost exactly how my last relationship began.) I’m just picturing the amount of saliva he probably just sprayed on her face.
Russian Hooker: I vanna see the house
Ronnie: Thank God, let me get my Sammi doll.
Vinny, nothing about Ron’s behavior is cute or funny, it is fucking sad. What could be more pathetic than a dad-to-be who has a girlfriend, who can’t stop talking about his ex gf, bringing a rando to his room on national TV? If you guessed, showing her the robot doll of your ex-girlfriend, you are right. I’m a psychic, because I wrote that thing about him getting the doll before they even showed that part. Also, the doll is touching herself. Ronnie, let it go. The doll is not going to join you rn. Oh fucking gross, they are in the bathroom with the door shut and against my will, I can hear slurping noises. Ron, haven’t you done enough to the poor bathroom? What has that bathroom ever done to you to deserve this treatment??
Can’t wait to find out next week that Ron definitely fucked someone else!
Images: Giphy (5)