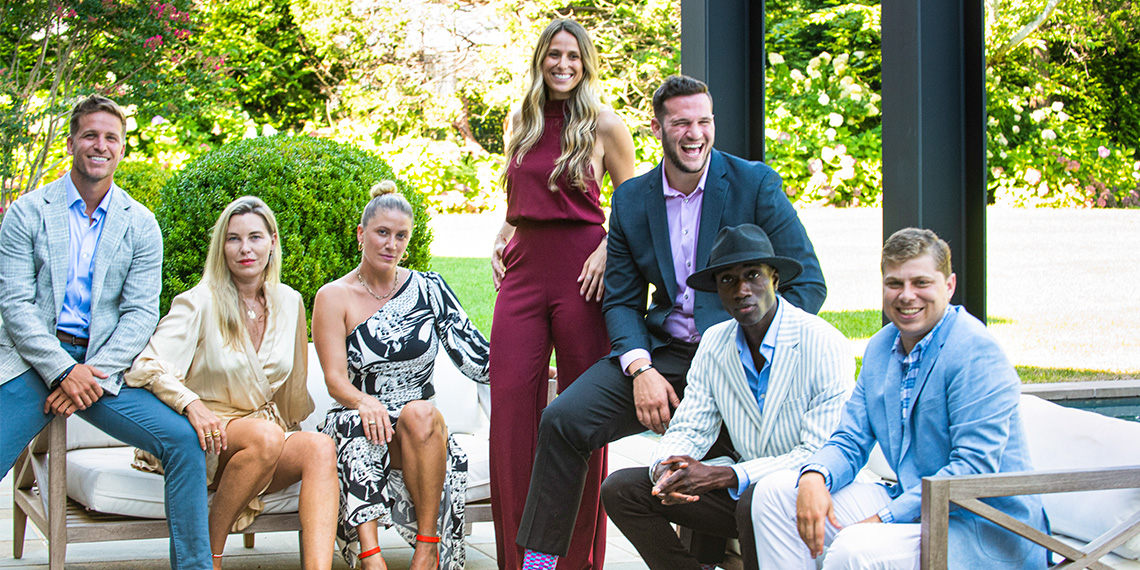 There are five main characters in the show: Michael, Peggy, Noel, J.B., and Jimmy (the boss). Michael, J.B., and Jimmy are three white guys with big bro energy who have been working in the Hamptons market for a little while. Noel is new to Nest Seekers, but he is a seasoned real estate agent who has worked in the Hamptons market for three years. He is also the only Black cast member. Peggy, the only female cast member, has worked for seven years in the Manhattan real estate market, but is a newbie to the Hamptons scene.

Right off the bat, we can sense that some of the characters are skeptical towards Noel, which is odd, since Peggy is also the new kid on the block—yet she does not appear to face the same treatment. Wonder why…

While Selling Sunset had a robust cast of characters running the gamut from angelic to satanic, the predominantly male cast of Million Dollar Beach House fails to captivate. Peggy and Noel are really the only two people bringing the heat in terms of drama, and everyone else is just kind of there. Michael’s wife having a baby does not a reality show make, no matter how many times he talks about it. J.B.’s main conflict is that he’s 29 and isn’t married or engaged, which he mentions one time in an aside to Michael. Any Jimmy, the boss, rarely appears in scenes—aside from that one time he pissed off a Boomer by taking an important call in the middle of a meeting, I can’t remember anything he did.

The Drama (Or Lack Thereof)

Selling Sunset was packed with drama—in every episode, five different scandals unfolded. Million Dollar Beach House, on the other hand, feeds off of just one incident between just two cast members. In their defense, there are only six episodes that run 30 minutes each. But as the viewer, I couldn’t help but crave some more theatrics. I mean, isn’t that why we’re here in the first place?

It all starts when Noel lists one of his properties for a whopping $35,000,000, a number that everyone at the brokerage thinks is too high. Since real estate is a team sport, and Peggy has some clients interested in the property, she questions Noel’s thinking behind the high price. But Noel is dismissive of Peggy’s concerns and offends her by questioning if her client can even afford such an expensive property.

The real drama goes down when Peggy takes an important client to Noel and he completely blows the showing, insulting Peggy’s client in the process and almost costing her the client. The showing ends up causing an all-out feud between the two. But this happens in the first episode, and is then dragged out as the one source of conflict for the remaining five.

In addition to the drama falling flat, so does the character development, which feels one-dimensional, as if the show’s creators do not think the viewers are capable of forming their own opinions. For example, they initially want us to hate Noel and side with Peggy. But as the show progresses, they start portraying Peggy as the emotional woman who can’t maintain a professional demeanor (which comes with its own set of sexist issues). TBH, despite Netflix trying to feed me conclusions, I didn’t feel strongly about any of the characters because it felt so choreographed. Selling Sunset has also been accused of manufacturing storylines, but the characters from that show are convincingly charismatic, so it works. I don’t think anyone could create Christine’s character in a writer’s room even if they tried.

I wanted to like Million Dollar Beach House but the last thing I need to watch in 2020 is mediocre white washed up high school football stars selling other mediocre white men million dollar Hamptons houses while being misogynistic and racist.

So let’s get to the big issue. Apart from Noel, the cast of Million Dollar Beach House is entirely white. This makes for an uncomfortable viewing experience, because the microaggressions towards Noel are evident. (The whole incident where no one could pronounce his name also felt weirdly edited.) There is also an awkward scene where Noel’s twin brother Joel (yes, their names rhyme) is asked to speak Korean because he lives in Korea. When he does fluently communicate, the other members accuse him of saying something rude. I’ll give Netflix the benefit of the doubt that they’re not trying to be purposefully racist, but when the only BIPOC is villainized throughout the show, it’s hard not to feel like it’s racist. Viewers were quick to point out the show’s issues with race on Twitter.

not sure why netflix decided to air this million dollar beach house show. the racist undertones were ridiculous but peggy is over the top terrible. top 5 on the list of terrible humans

I remember feeling like the cast of Selling Sunset was too white and this was Netflix’s chance to give the viewers more diverse characters, but this was just not it.

As a whole, Million Dollar Beach House could have gotten away with being a boring, low-budget knock-off of Selling Sunset, but the racism and gender stereotyping are reason enough for this show to be removed from your watchlist.