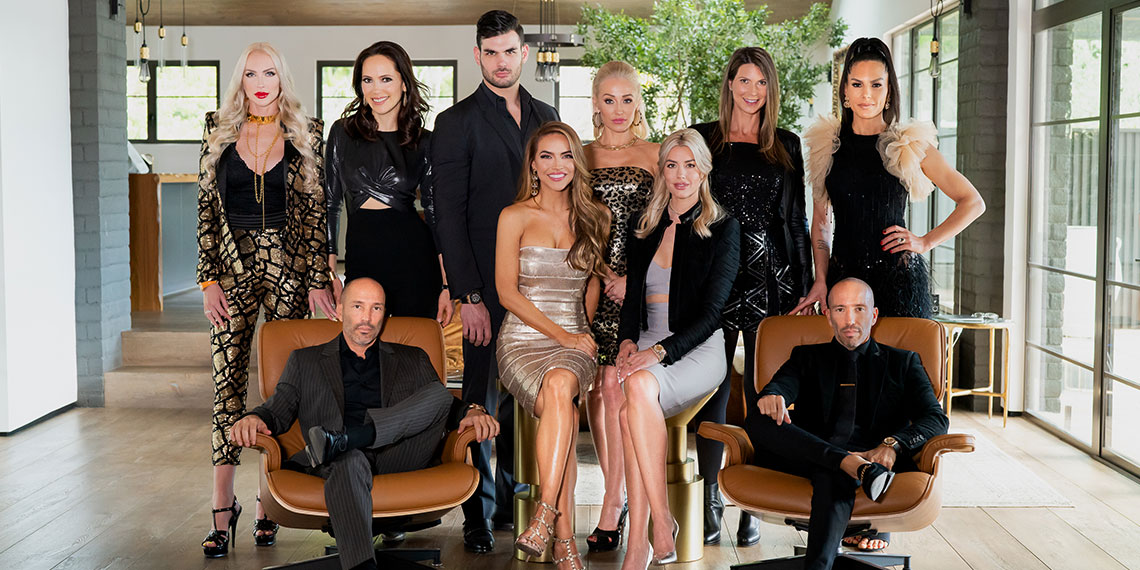 Since Selling Sunset first premiered on Netflix last year, fans have constantly questioned how real the “reality” show actually is. The show was created by the father of fake reality TV (The Hills’ Adam DiVello), and its storylines and production values all feel a little too perfect to be rooted in reality. The women on the show are in flawless glam at all times, they constantly hash out their personal issues at work functions, and their relationship timelines all fit neatly into eight-episode seasons.

Since the third season dropped earlier this month, Selling Sunset has really blown up, and people are more determined than ever to dig in to the truth of what we see on the show. One of the key storylines that is frequently questioned is Mary and Romain’s marriage. On season one, we saw them disagreeing about fundamental relationship issues such as having kids and buying a house, and then they magically got engaged the next episode. Their wedding was shown in season two, but there was speculation that they never actually got married. Turns out the truth is the exact opposite. This week, TMZ got its hands on a copy of Mary and Romain’s marriage license, proving that they are, in fact, married. But the license was issued in March 2018, more than a year before the first season of Selling Sunset was even released.

This really throws a wrench into Mary’s entire storyline for the first two seasons. She was already legally married to Romain before they even began filming season one, which means that all those scenes of them discussing their future together are basically 100% fake. It wouldn’t be that weird to plan a big TV wedding once you were already legally married, but pretending to be unsure about your future together, and then staging a fake engagement, is taking it to another level. We already knew her diamond was fake, but everything else? I have to admit, this news came as a bit of a shock to me.

I’m so lucky to call this man my husband, he is my rock and best friend. #sellingsunset #netflix #season2 #powercouple #newlyweds #watchnow #justreleased #realitytv 📸: @aria_ak

Another interesting revelation from the marriage license is that Mary and Romain got married just four months after Mary’s divorce was finalized. The timeline here is obviously very murky, and I have a million questions for everyone involved. Mary hasn’t addressed the timeline on social media (who knows what kind of NDA she signed), but I really feel like the people deserve answers here. That being said, I will absolutely still watch this show until the end of time, because it is just that entertaining.

On top of the personal drama being a bit staged (to put it politely), the show’s portrayal of the Oppenheim Group agents as LA’s top team also seems questionable. Recently, the real estate agents from Bravo’s Million Dollar Listing Los Angeles appeared on Watch What Happens Live!, and Tracy Tutor threw some shade at the cast of Netflix’s show. She said that Selling Sunset “is not about selling real estate…it’s about dating bachelors in the Hollywood Hills.” She threw out an invitation to the women on Selling Sunset, saying “if you want to sell real estate, maybe kind of come on over to our show and figure out how that works.” Ouch. The other MDL agents added that they hadn’t come across the women from Selling Sunset in their real estate work.

Last week, reality TV connoisseur Chrissy Teigen finally binged Selling Sunset, and she also commented on the actual careers of the agents at the Oppenheim Group. She said that despite frequently looking at LA real estate, she has “never seen any of these people,” and added that neither had her agents.

I will say, I look at LA real estate a lot and have never seen any of these people lol either have our agents, who I have obsessively asked.

Unsurprisingly, the Selling Sunset cast feels some type of way about these comments, and many of them have spoken out in response. Davina Potratz and Maya Vander both spoke to People, with Davina saying that anyone who does their research will recognize that she is “quite serious about real estate.” Maya  acknowledged that things on the show can seem fake or overly simplified, but said this is because they’re trying to show complicated transactions in short scenes.

Jason Oppenheim responded to Chrissy’s tweet, giving out a nice backhanded compliment about her new home and her agent. In another tweet, he said that his team “works tirelessly,” and invited her to stop by the office any time.

Chrissy, thanks for watching our show! Regarding your agent’s knowledge of members of my team, I respectfully don’t know him either although that doesn’t mean he isn’t successful and didn’t just sell you a stunning home in Weho (seriously, I love your new house).

In a statement to People, Jason further combated the idea that the professional side of the show isn’t real: “Any insinuation that the agents on our show are not experienced, successful, or licensed, evidences a complete disregard for the facts.” He added that “Even a superficial investigation would identify previous team photos, hundreds of millions in transacted sales, and more than 50 years of combined licensed real estate experience from these agents.” Damn, okay, we get it.

I understand why Jason Oppenheim is defensive about this, but I think he’s kind of missing the point. For the most part, speculation has revolved around the specific transactions shown in the episodes, not the idea that the Oppenheim Group is a generally successful brokerage. When Christine hops off a private jet after months of traveling the world and just decides to sell a house, it’s understandable that things don’t seem 100% real.

And just as some icing on the cake of questioning what’s real about Selling Sunset, we have this TikTok that recently went viral. On the show, Christine has a listing, and she says that the owner is in Europe, so she can’t get a hold of him. Turns out, the woman who made the TikTok IS THE OWNER. She clarified in comments that she did list the house at one point, but Christine wasn’t the agent, and she’s never met her. And no, she wasn’t in Europe. LOL.

So, let’s be real, Selling Sunset isn’t. And that’s okay! It’s still a great show, but you should definitely take it with a massive grain of salt. Just sit back and enjoy the ridiculousness, and don’t worry too much about what’s real and what’s not.