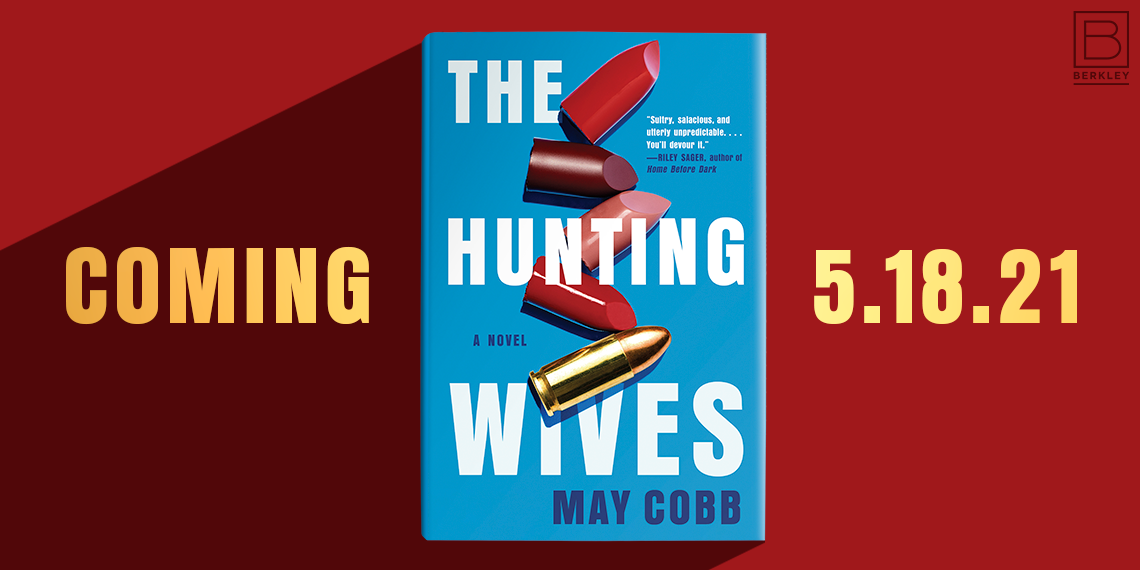 For anyone that loves Big Little Lies, Mean Girls, and Desperate Housewives, May Cobb’s upcoming suspense novel The Hunting Wives is our newest obsession, as it’s being hailed as a Desperate Housewives set in Texas. In the novel, out May 18, 2021, protagonist Sophie O’Neill moves from her big-city life in Chicago to a small town in east Texas with her husband and young son. After settling down, she realizes her life is now quiet and boring, and she looks for a little more excitement. Sophie meets Margot Banks, who is a part of an elite clique known as the Hunting Wives. She immediately feels drawn toward Margot and her mysterious world full of late-night adventures and reckless partying. As Sophie’s involvement intensifies, she starts slipping away from her family as she finds herself in the middle of a murder investigation, and loses control over her own life.

Based in Austin, Texas, May Cobb is a novelist and freelance writer. Back in 2015, she won the Writer’s League of Texas Manuscript Contest. Her debut novel Big Woods (2018) was awarded as an Independent Publisher Book Award for Suspense/Thriller. Her writing has also been featured in Austin Monthly and the online edition of Jazz Times. The Hunting Wives comes out May 18, 2021, which I know feels like it’s a million lightyears away—but not to worry, because Betches readers can read an exclusive excerpt below. Preorder The Hunting Wives here.

Back inside, the lake house feels glaring after the darkness of the trail. Margot sinks the wine into a silver ice bucket and twists the bottle around, chilling it. Callie fetches wineglasses from the cabinet, and fills each glass to the brim.

We toast and sip, but I only take the smallest of sips so I can safely drive home. Margot tosses back half her glass and sets it on the bar.

“Always,” Callie says, winding a lock of coarse hair around her finger.

“I’m in!” Tina trills, rocking back and forth on her feet, her coal-black eyes squinting in a smile.

“Where?” Jill asks, demure, her face half-hidden behind her huge wineglass.

“I was thinking Rusty’s,” Margot says.

Jill sets her glass down, crosses her arms.

“Oh, please, Jilly! It’s been forever. Don’t pout. I’ll behave, I promise.” Margot goes over to Jill, puts her arm around her. There’s a perceptible shift in Jill’s demeanor, a small succumbing to Margot’s power.

I have no idea what they’re talking about, but suddenly they’re all looking at me. I take another small sip of wine, swish it around in my mouth.

“Who wants to tell her the rules?” Margot asks, her hip cocked against Jill’s, her exquisitely-shaped eyebrows hiked in a question mark.

“I will,” Callie says. This is the first time she’s addressed me directly, and there’s a trace of a sneer in her expression.

“Rules about what?” I ask, nervously giggling, clasping my wine glass.

“Oh, please,” Callie rolls her eyes. “Don’t act like you’re not bored in your marriage.”

“Maybe she’s not,” Margot says, her voice playful. “Her husband’s a hottie.”

The flush of alcohol and Margot’s hooded eyes on me make my face flame.

“I think everyone here is a little bored, except for Jill,” Callie says.

“Yeah, Jilly, what did Amazon bring you this week? Do tell.” Margot’s unwrapped herself from Jill and crosses over the bar to refresh her wine. “I want to hear all about your latest toy.”

I catch myself gawking at Jill and quickly look away before she notices.

“Ooooh, a new toy,” Callie says. “What role is Tom going to play? Will he be the police officer this time or the victim?” Callie snickers.

“You only wish you still had sex with your husband,” Jill fires back.

For some reason, Callie answers to me, “He chases me around the house, but I’m over it.”

She stretches her long legs across the length of the sofa, takes another mouthful of wine.

“So anyway, we’re all a little bored and have to let it out somehow.”

The cold blast from the air conditioning has fogged up the windows, so I can’t see the lake anymore behind Callie, only the clouds of condensation frosting the glass.

My stomach registers a red-hot signal of danger; I don’t know how I feel about all this. Graham and I have never been anything but monogamous and I’m certainly not bored with him. Am I? I’m just bored, I think. But if that’s the case, why am I so drawn to Margot and why can’t I get her out of my head? If I’m honest, there’s part of me that, despite the sense of alarm that looms in the air, likes listening to them. It excites me. Makes me feel alive. Maybe the most alive I’ve felt since moving back. No, not maybe. Definitely.

“So. The rules.” Callie sits up now, rests her elbows on her knees. “There’s only two, really. We only use our first names. And, we don’t go all the way.”

I nod dumbly as if being read the instructions to a board game.

“So, you’re in,” Callie says matter-of-factly.

Again, that pinprick of danger at the back of my neck. And before I have a chance to respond, Margot fishes a set of keys off the wooden coffee table, stashes her Louis Vuitton clutch under her arm, and heads for the front door.

“I’m driving. Everyone load up,” she says and everyone rises and trails her to the entryway.

I take out my phone and check the time. 8:45. I should go home; I know I should.  I certainly don’t want to get trapped all night by riding in Margot’s car. But then, I don’t want them to think I’m a scaredy-cat, either.

“I’ll follow in my own car,” I hear myself saying. My voice squeaks out of high-pitched and thin.

Margot freezes, turns around, and frowns at me.

“Early day tomorrow,” I say, casting my eyes toward the floor.

She twists back around and steps out the open door. “Suit yourself.” The others trickle out behind her. I follow.

Everyone is weaving towards Margot’s Mercedes but Tina spins around.

“I’ll ride with Sophie! In case she gets lost.”

Before Tina climbs in the Highlander, I dust a constellation of Cheerios off her seat. How Jack manages to scatter them everywhere, I’ll never understand. Tina’s perfume, powdery and floral, fills the cabin and she’s so buoyant, she seems to spring into the seat next to me.

Her husband, Bill, she tells me with a lick of pride, lifting her voice, is a home-builder. One of the biggest contractors in Mapleton.  They live in a sparkling new development north of town. I’ve driven by and it’s all castle-like homes with spires and arched windows.

As we wind through the lake roads, tracking the red eyes of Margot’s taillights, I’m struck by how utterly dark it is out here and I notice, as we approach the country highway, that Margot is turning away from town, not toward it.

“Oh, it’s a little honky-tonk on the outskirts of town. Margot likes to pick out-of-way spots. For obvious reasons.” She flicks down the mirror on the visor and applies a fresh coat of pink lipstick. “We don’t go much, though.”

“Hunting or to Rusty’s?”

She scrunches her curls with her fingers, studies her hair in the mirror.

“I was talking about Rusty’s specifically, but we don’t go hunting that often either. Maybe twice a month. But sometimes more. Depends on Margot’s mood,” she adds, snapping the mirror shut and darkening the interior of the car. “Margot’s appetite for men is insatiable. You’ll see.”

I instantly like and feel comfortable with her but chew my bottom lip as I ask the next question. “So, do you, you know,” I’m fumbling, can’t spit the words out.

“What? Cheat on my husband?” she asks, her voice bright and cavernous. “No. I mean, I kissed another guy once, the first time I went out with them, actually, but I hated myself for it. Bill and I are high school sweethearts. I can’t imagine being with anyone else. So, no. I’m just here to watch the train wreck.” She rubs her hands together in excitement.

The highway is empty but well-lit. Giant trees surf past us, cut by the strobe of fluorescent streetlights.

“Anyway, Margot’s in some kind of constant war with her husband, a who can one-up each other battle. Have you ever seen him?”

I shake my head no, though of course, I’ve seen him on Facebook. Just never in person. Those scorching eyes, his bronzed complexion.

“Well, he’s gorgeous. I mean, dead hot. But Jed cheated on her once in such a stupidly-typical way, with his secretary. Got caught, too, in a stupidly-typical way: sloppy texting. Margot paid the poor girl a visit to her apartment and ran her out of town. This was three years ago, but Margot does everything she can to punish him still,” she snorts, shakes her head. “She keeps him under lock and key.  I’m pretty sure he hasn’t stepped out of line since, but Margot surely has.”

Tina’s fingers dance over the screen of my satellite radio. “Oooh, I love this song, mind if I turn it up?”

It’s “Brass Monkey” by the Beastie Boys and after she cranks the volume, she lowers her window and warm night air oozes through the car.

I roll my window down, too, and we both dance in our seats to the music.

As the song ends, I realize we’ve lost sight of Margot. I turn down the volume.

“No sweat, we’re almost there, just one last turn.”

I roll my window up, smooth my hair down, re-adjust my bra.

Tina pauses for a second, seeming to consider as she fingers the silver hoop dangling from her ear. “She doesn’t like anyone who Margot might like. If you’re getting chilly vibes from her, that’s why. I think it was a full six months before she even acknowledged me. Just ignore her.”

We’re approaching a light. Tina waves for me to turn left. We head down a two-lane road.

“She’s all Single-White Female with Margot. Lives on the opposite end of the street from her, and drives the same make and model car. She wants to be her; she’s a bit obsessed with her. Her husband Trip is just a big oaf with a lot of family money. Fishes all the time. Manages the family finances. Could pass for okay-looking, though, if he dropped some weight.”

(I’ve seen him, too, on Facebook. Sort of a heavy, pasty Ben Affleck.)

I see the lights of the bar flickering in the distance. I slow the car and pull into the gravel parking lot.

“Callie and Margot went away together senior year of high school. Left Mapleton and went to that chi-chi boarding school in Dallas called Hockaday. Jill told me once that there were rumors that they were “together” while they were away. Not sure if there were ever a thing between them but Callie sure acts like it.”