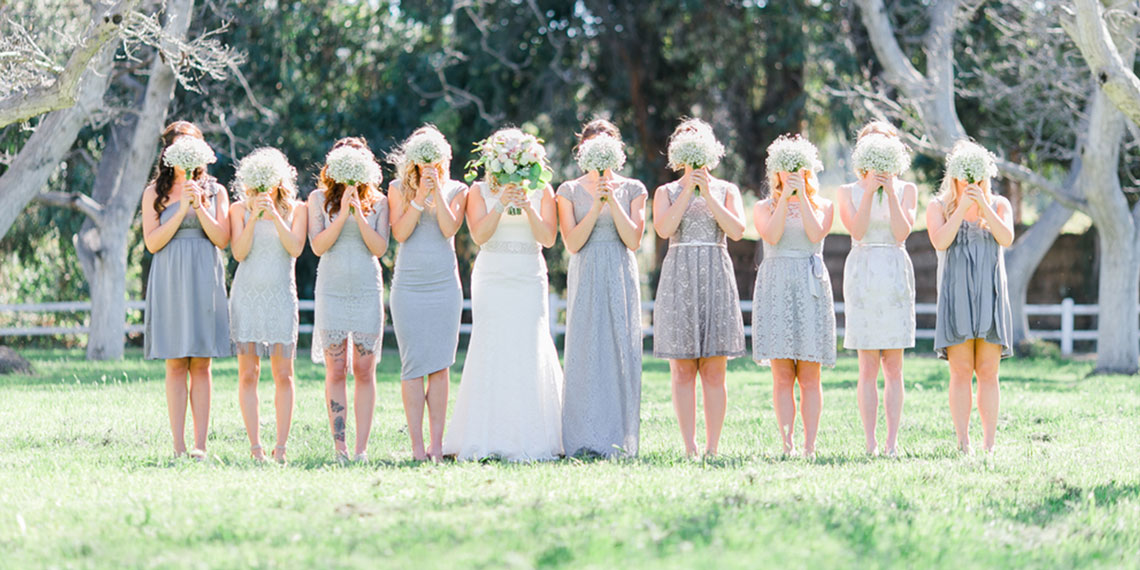 Here’s How Much It Really Costs To Be A Bridesmaid

Most women say that being a mom is the hardest job, but as a woman who hasn’t yet experienced the miracle of childbirth, I will say that the most difficult job is being a bridesmaid. Look, when my good friend from childhood asked me to be a bridesmaid, I was (and still am) thrilled. I felt validated that someone I love so dearly reciprocated that love by asking me to be one of the select few to share in the pre-wedding festivities like  attending cake tastings and planning the bridal shower. To quote Fall Out Boy, “Champagne for my real friends, real pain for my sham friends.” As a bridesmaid, I’m getting a few bottles of Veuve.

But because I’m a whiny betch, I do have one complaint about being a bridesmaid: it’s expensive af and I don’t know if I can finance being such a good friend for much longer. To be fair, the bride-centric events haven’t really started yet because she literally just got engaged, but she sent us all an email detailing everything we’ll be doing from today until the wedding and let me just say, I’m overwhelmed. Luckily, people like Alyssa Longobucco, Senior Style and Planning Editor at The Knot, and Amanda Clayman, Financial Wellness Advocate at Prudential and certified Financial Therapist, exist and will help so that we bridesmaids don’t have to choose between eating three meals a day and being *Gretchen Wieners voice* such a good friend. This is how much it costs to be a bridesmaid, so you can start prepping your bank account now.

Until now, I thought the only real expense of being a bridesmaid was the dress and shoes. Oh, how stupid I was. According to a study conducted by WeddingWire, the average cost of being a bridesmaid in 2017 was approximately $1,200. What a coincidence, that’s also the approximate cost of my rent! Leave your jaw on the floor, because the most shocking facts and figures are yet to come. Remember when I thought the only thing I’d splurge on was the dress? Well, that’s actually one of the smaller ticket items I’ll be paying for between now and 10 months down the line when my friend walks down the aisle. Will I even make it that long or will I suffocate in a pile of unpaid credit card bills and die before then? Only time will tell. It’s an especially hard dilemma because, Clayman says, “We want to have good boundaries, especially with our money, and to make choices that are in alignment with our own goals and obligations. On the other hand, we want to be a good friend, to be supportive, and to participate in the significance of someone’s very special day (or weeks, months, or year, depending on how some of these events shake out).” So how do I be a good friend without declaring bankruptcy at 25? Let’s fine out, shall we?

Whether or not the bride is forcing several full-grown women to wear matching f*cking dresses like we are gigantic sextuplets in heels, we’ll still need to buy a new dress for the wedding day because it’s unlikely that the bridal party dress code will be “something cute that you already own.” But unless the bride is a financial sadist, it’s also unlikely that she’ll pick our dresses at Neiman Marcus or some other fashion dungeon that only sells designer sh*t. So the general cost of a bridesmaid lewk, which includes the dress, shoes, accessories (purse?), hair, and makeup, falls somewhere around $300. I mean, I love this girl, but f*ck! Unfortunately, the wedding day look is one place you can’t really cut corners on. That said, if you’re having anxiety about affording everything, Longobucco says, “Don’t be nervous to bring it up—you were asked to play a major role in her celebration, so the couple obviously cares about you!” If you speak up, maybe you and the bride can work out some solution.

This is honestly something I’m down to spend a f*ck ton of money on because going away for a weekend to a city I’ve never seen with a bunch of my closest girlfriends sounds like fun. I’m way more enthusiastic about giving up Chipotle three nights a week for a fun getaway than I am for an outfit that will live under my bed until my lease is up. So, how much money am I losing here? Longobucco says, “These days, it’s super common to have friends scattered throughout the country, so while the planned event may be local to some of the attendees, it’s likely that at least one or two will have to travel to participate. Those expenses can really add up!” They sure do! So how much am I in for? The Knot 2018 Wedding Guest Study found that, on average, bachelorette attendees spend $477 each if the celebration has them paying for travel, accommodations, and gifts.

Ok honestly, that’s not as bad as I thought it would be, but knowing my friend, she’s going to have the bachelorette party on the f*cking moon because it’s ~exotic and original.~ Longobucco adds, “Some cities, like Nashville or New Orleans, boast tons of great entertainment options like live music, dancing or walking tours that cost little (to nothing) to participate in. Other cities though, like Las Vegas or New York City, may require a bit more planning (and paying) in advance. Whoever is taking the lead on arranging the bachelorette party should try and stay mindful of budget and the bride-to-be’s wish list.”

As my sorority little can attest, I am not crafty and I don’t give a sh*t. Because every bride and her bridesmaids are different, there’s no general price tag on decorations, but it generally falls somewhere between $100 and thousands of dollars. Quite a range! Longobucco suggests, “Before buying or planning anything, ask the guest of honor what she’s hoping her celebration will look like. Starting from a place of mutual understanding and expectations is super important, especially if the bride-to-be would like to be hands-off throughout the rest of the shower or bachelorette planning process.” Ok, yes, yes, yes. I don’t even know what “decorations” entail. Like, pink streamers, hidden Smirnoff Ices and penis-shaped snacks? Please, no one put me in charge of the general ambiance at the shower.

Moving onto the gift, which, according to The Knot 2018 Wedding Guest Study, averages about $102 per guest. Luckily, there’s no real formula for figuring out how much you should spend on a gift, as what you get really depends on how well you know the bride. Clayman says, “Remember that in the vast majority of these situations, the bride would not want her wedding to be a cause of distress or hardship for anyone involved.” In that case, maybe I’ll just take the stress off of my debit card and give her the gift of the written word.

Look, being a bridesmaid is expensive no matter what, but all women are  blessed to do it at least once in their lives. Pray it happens to you in your 20s, because there is nothing cute about wearing a pink flame-retardant gown when you’re old enough to incorporate retinol into your skin care regimen. As much as it sucks to spend your hard-earned happy hour money on penis-shaped decor and bejeweled heels you’ll never wear again, take comfort in knowing that when you get married, these bitches will be doing the same thing for you.