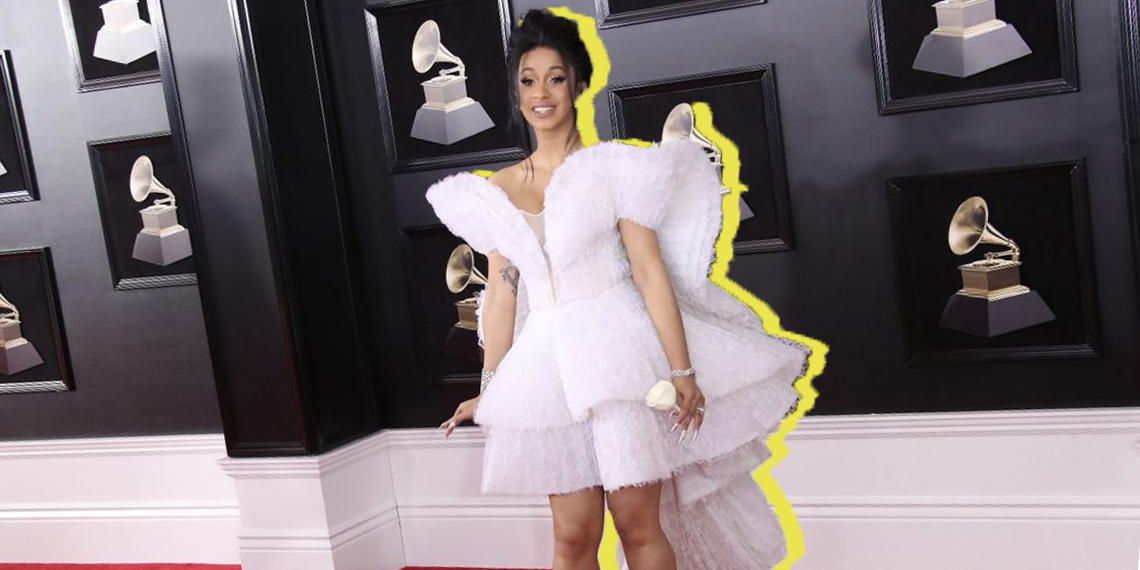 The Best & Worst Looks At The 60th Annual Grammy Awards

Last night was the 60th Annual Grammy Awards, and the celebrity red carpet looks did not disappoint. Actually, JK. If you were reading a regular fashion roundup, these looks would be considered “non-disappointing.” But here, where we live for the opportunity to shit on any and all things fugly, I am disappointed to announce that for the most part, everyone looked pretty good at this year’s Grammys. The only person who looked totally awful was that chick who wore the Make America Great Again gown last year. Her name is not even worth Googling, so I’ll save you the time and let you know that someone wore a pro-life dress with a fetus design on it. I don’t know who keeps inviting this bitch, but it’s time they tighten up security at the Grammys. It’s just embarrassing at this point. Anyway, here are the celebrities who killed the red carpet… and a few who missed the mark for good measure. Let’s be honest, a best dressed list gets boring faster than a Bachelor group date without alcohol.

Cardi B could have rolled up in a Fashion Nova bodycon and Steve Madden heels and we’d all still say she was the best dressed because America is a cult and Belcalis Almanzar is our fearless leader. Obviously, she looked absolutely amazing in an Ashi gown with—you guessed it— Christian Louboutin bloody shoes. She literally looks like an angel with actual wings. *insert Cardi okurrrr chirp here*

Chrissy Teigen always looks perfect, so seeing her on a best dressed list is as likely as finding an empty bottle of Jergens and a crushed Big Mac box in Trump’s bathroom trash can. Her Yanina Couture gown would make anyone else look like a disco ball, but she worked it.

Gaga’s red carpet style has relatively calmed down (…kind of) recently, but this look is a pretty good happy medium of classic shocking Gaga and some of her more subtle looks. This Armani gown is obv stunning, but she kept it on brand with a Daenerys Targaryen looking braid. She also took off the ball gown skirt, revealing a lace bodysuit for the actual ceremony. Sitting next to Lady Gaga at an award show is apparently no longer a risk for injury.

First-time Grammy attendee and person-who-definitely-should-have-won-Best-New-Artist, SZA may have just created one of my favorite red carpet looks ever. This Atelier Versace gown is like, the definition of looking effortlessly perfect. She makes the Disney Princesses look like total scrubs.

I think we’re finally past the point where when a female celebrity wears a pantsuit on a red carpet, everyone’s like “OMG this is so new and cutting edge!” Like, this isn’t 1850. I’m glad we’re not shocked by pants anymore. Anyway, Eve’s striped sparkled pantsuit is a little Beetlejuice, but overall dope AF.

Maren Morris’s silver cutout dress is like, two cutouts away from looking like a glitter glue snowflake made by a kindergartener, and it kind of reminds me of that dress Ariel Winter wore to the Modern Family premiere, but it still definitely works. It’s amazing. She also spoke out about gun control while on the red carpet, which is something country stars with a conservative fan base generally try to avoid. Basically, Maren is a bad betch who DGAF about following rules and I’m kind of obsessed with her now.

*Billy Ray Cyrus voice* My lil’ Miley Ray done growed up! Okay, but actually, Miley is giving us serious old Hollywood vibes with this red gown. Her performance was also incred and didn’t even involve any uncomfortable licking… even if it did involve a number of uncomfortable flirty looks at Elton John. Baby steps, I guess.

You’d think that the host of the fucking Grammys would take the time to make sure his suit was properly fitted, but you’d be wrong. The front was like, not ironed and the proportions of it made him look like this bird:

James changed halfway through the show, probably because somebody fired his stylist on the spot.

Not sure how Sarah Silverman got ahold of Cady Heron’s Halloween dress, but it wasn’t the best choice for the red carpet.

I know being an emo rapper is like, low-key his thing (think about it…), but I feel like with the amount of money Lil Uzi Vert has, he probably could have bought his outfit somewhere a little more upscale than Hot Topic. Maybe I’m just salty because if this look had happened when I was in middle school, I would have been the most trendy girl in 8th grade. And yet, that chain probably cost more than my apartment *Clutches my black pencil eyeliner, whispering “all my friends are dead” and weeping to myself*

From far away, Julia’s gown is totally fine. However, when you look closer, you’ll find that it’s bedazzled with butterflies. Fucking butterflies. The skirt of this dress looks like it was made out of curtains from the set of an American Girl Doll catalogue photo shoot. In other words, it’s a full-on Monet.

P!nk is pretty open about the fact that she literally does not give a shit about what she wears, but like, come the fuck on. There’s a difference between showing up in something boring because you can’t be bothered to care, and putting on… whatever the fuck this is. It’s like, half muppet, half fuzzy flip flops you wore to cheer camp in middle school. How many Truffula Trees had to die for this dress, P!nk?

Genuinely thought this photo of Jenny McCarthy was of a mannequin of a store called like, “Mystique” or some shit that you can’t tell if it’s supposed to be trashy club wear or literal S&M stuff. When you add in the outdated Katy Perry hair and the inexplicable sunglasses indoors, I feel like I’m looking at a female police officer character in a video game. I wasn’t sure what Jenny McCarthy was doing at the Grammys before, and now I’m even less sure.