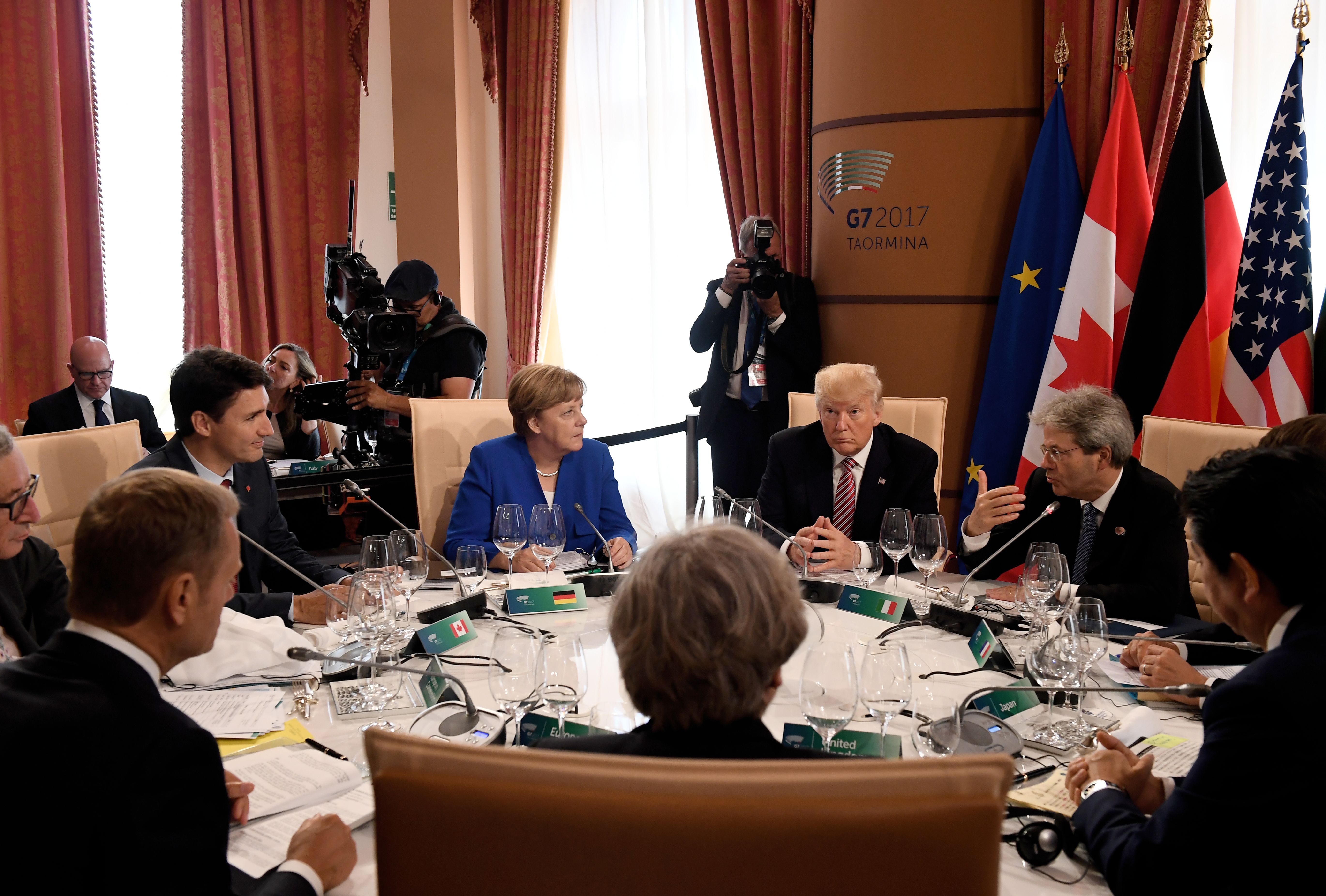 Pics Or It Didn’t Happen: All The Iconic Images Out Of The G7 Summit

Pics or you didn’t understand what happened. The G7 summit was held on Friday in Charlevoix, Quebec, with this year’s focus on trade. The yearly summit brings leaders from Germany, Japan, Canada, Italy, France, the UK, and the United States to what I wish was a very important dance party. Of course, Donald Trump’s behavior was similar to that of my teen PMS fits as he lashed out at many of America’s key allies by rejecting a communique that all 7 countries had supposedly agreed to. The 4,000 word communique tackled issues such as jobs, climate change, gender equality, building a peaceful world and investing in growth that benefits all countries involved.

Trump rejected the communique after a statement from Canadian Prime Minister/Hot person Justin Trudeau criticized Trump’s recent decision to impose steel and aluminum tariffs on our allies. Trump then lashed out on (where else?) Twitter, calling Trudeau “weak” and rescinding his decision to sign on to the joint statement. He may not be the best president, but he is certainly the pettiest.

The whole thing was so dramatic, it’s hard to explain in words. Thats why we’re doing it in pics. Let’s break down some of the summit’s most iconic images.

A photo of Angela Merkel standing over Trump while he sits in an arms-crossed pout went viral as it pretty much sums up how the world is feeling about America’s leadership right now.

“Just tell us what Vladimir has on you. Maybe we can help.” pic.twitter.com/DLc7YJFXqT

Frustrations were so high that some called the summit “The G6 Plus One.”

Angela Merkel posted the photo, which looks like a renaissance painting of a school teacher lecturing a bully, on instagram with the caption: “Day two of the G7 summit in Canada: spontaneous meeting between two working sessions. #G7Charlevoix.”

He didn’t stop there, though. On Saturday, in the most symbolic act ever, Trump arrived late to a breakfast meeting on gender equality.

AP grabbed this shot of Trump walking in late to the gender equality breakfast at the G7 summit pic.twitter.com/ZBR3dcXGcG

Prime Minister Justin Trudeau went ahead and started the meeting without Trump, which is probably for the best. Nobody needs a guy interrupting the gender equality meeting by saying, “Perhaps we could add more beauty pageants to the workplace and that would fix the wage gap?”

Trump arrived right as Gender Equality Advisory Council co-chair Isabelle Hudon was speaking, causing security personnel to forge a path for him through the crowd of photographers and journalists. The sound of cameras clicking nearly drowned out Hudon’s speech. Trump, not only did you arrive late to the feminism party, but you also drowned out a woman while she was speaking.

Boy Band Frontrunner Justin Trudeau tweeted out a beautifully passive aggressive photo of the breakfast featuring Trump’s empty chair and French President Emmanuel Macron stared Trump down while he took his seat. Macron must’ve been holding in some serious animosity toward Trump since their first meeting in May of last year when Trump greeted him with a 30-second hulk handshake. This time Macron was prepared and gripped Trump’s hand so tightly that he left a mark. Which brings us to…

During their meeting, Macron reportedly flashed a few winks and smiles at Trump’s claim that their communication was “direct and open.” Trump said that Macron is “his friend” and that they’ve “had a great relationship right from the beginning.” Mr. President, when was that last time your friend almost ripped your hand off? This man hates you.

“He couldn’t resist a squeeze or two”
Donald Trump and Emmanuel Macron had a handshake showdown when they met at the G7 summit in Canada
???? https://t.co/tCGdZKHKeX pic.twitter.com/XlTsATIeC9

Can’t wait for Trump to ruin our relationship with the whole world! Yay!