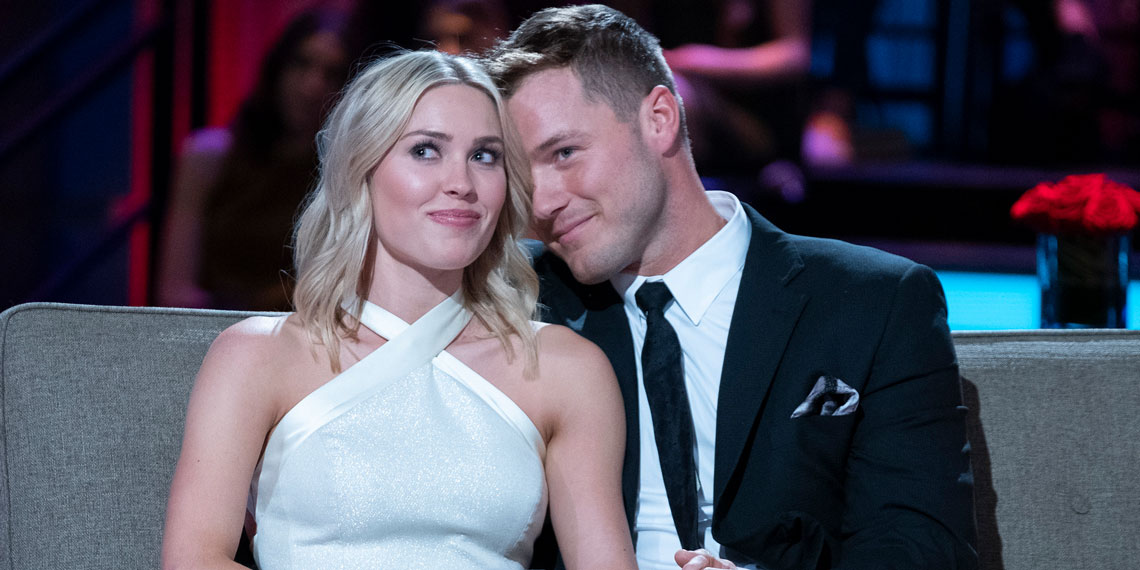 I never thought I’d say this, but like the Boys II Men song, “It’s So Hard to Say Goodbye” to The Bachelor Season 23. Yes, a season where we allowed a 26-year-old man to put us under Citizens Arrest for TWO WHOLE MONTHS. Men and women canceled their new years resolutions in exchange for arguments with their TV and beating boxed wine to its expiration date. But hey, all good things must come to an end, right? Let’s hope one of them is this virginity talk. Let’s see how the two-night finale, that could’ve been an email, shook out.

Chris Harrison (dressed like a hearse driver) decides to rip the scab off that had began to heal by starting Monday’s finale with a recap of the season. Why put us through this pain AGAIN? You’ve already done it to us every Monday of 2019. For those that didn’t see every Monday episode, you still have more brain cells than the rest of us, and your IQ isn’t a single digit. But here’s a snippet of what you missed: Boy starts out with 30 women to date him, all but six Irish exit. That’s pretty much all you need to know.

We pick back up with Colton post-fence jump storming down the street because Domino’s Portugal is about to close in 5 minutes. (I understand his rage, because with no phone, you can’t call Postmates). After the producers find Colton via his Life Alert necklace, he screams at them: “I’m done. Done with the whole thing!” The response would make you think someone just asked him, “Are you finished with your vegetables?,” but no, Colton was referring to his time as The Bachelor. One of the producers gives him a big hug, consoles him, and whispers: “We got a show to produce, we already prepaid these dates, so you better love somebody.” After finding out that if he cancels the season, he’s financially responsible for the cost of the remaining dates, he changes his tune.

After a good night’s sleep on a twin extra long mattress, Colton decides to pay Tayshia a visit because she’s the only one with English channels on her TV. After he tells her that he’s only capable of loving one thing (which is a lie, I love Cinnabon and I love the color gray) she asks to speak to him without the cameras. This was probably the most upset I’ve been all season, because all seven-foot-twelve of Colton breaks out into tears, and we don’t get to see any of it. Just like that, Tayshia is now gone, and back to Orange County trying to get on a reboot of the MTV show The Hills.

Nighttime falls, and Colton goes to visit Hannah G. who has been locked in a hotel room since before indoor plumbing was a thing. She’s super excited to tell Colton “I love you,” when all he plans on telling her is, “Your gate # is E15 back to Alabama.” Colton tries to communicate that he really thinks that they could be great together, and even tells her at one point: “I thought it was gonna be you.” Well I’m pretty sure she was thinking the same thing when you had your tongue near her pancreas in Thailand, but hey, things change.

At this point of the finale, Hannah G. comes out to show the post-Bachelor glow-up, and lets Colton have it in the most eloquent way possible. She pretty much lets him know, “What Cassie did to you, you did to me.” You can tell that was a prepared statement because she had it written on her hand like the answers to a high school Spanish test. Bachelor alums Ben Higgins, Blake, Garrett, and Jason come out to discuss what’s going on right now, but I really think they’re only there because Colton owes them money and keeps rejecting their Venmo requests. PAY UP, COLTON.

One thing to not be forgotten is that in this way-too-long-finale, Cassie says, “Colton wants a wife and family, and I’m not ready for that.” I’m pretty sure that’s the FIRST question on the Bachelor/Bachelorette application that we fill out.

Question 1: Are you ready to be married? If yes, proceed to question 2. If no, what the hell are you doing here?

Cassie: “Colton wants a life and a family, and I’m not ready for that.”

Umm Cassie…what show did you think you were going on, The Price is Right???#thebachelor

In another attempt to live life with fewer brain cells, we subject ourselves to another two hours that could’ve been a voicemail on Tuesday. Colton realizes that he missed his flight home, and since the next flight to the Americas isn’t for another 48 hours, he might as well go to Home Depot, get some kneepads, and beg for his girl back. Colton shows up at Cassie’s hotel unannounced, with no gifts, no flowers, no nothing. This shows the lack of commitment here, because my 30 years of experience with women on this earth tells me if you at LEAST show up with hummus, they’ll at bare minimum listen to you.

After being forced out of her room by production, Colton tells Cassie that he sent Tayshia and Hannah home, to which she laughs in his face, and says how weird/crazy he is. Let’s set the record straight. Colton may be one thing, but he’s not weird! Definitely is crazy though, because I’ve seen him go several minutes without blinking, and that in itself should be enough for him to have to wear one of those jackets that make you hug yourself.  Colton continues to beg like a toddler at bedtime, and Cassie decides to meet his family in Spain get another free first class trip.

Cassie meets the family, and I can already tell that Momma Colton wants to beat Cassie’s ass for showing up empty-handed. Colton and his mother talk and she expresses her concerns, and Colton wants to hear none of it because, like finding Michelle Obama’s book at the library, there are no options left. Colton’s dad probably calls it how it is the most, telling Colton, “I just think you want what you can’t have.” I think this is probably true, and makes sense why I want Meghan Markle so much because she hasn’t returned any of my calls.

After convincing her to not reject him on TV again, Colton and Cassie enjoy their final date in Portugal. They take a nice ride in a Jeep and rappel down a cliff to Yogi Bear & Boo Boo’s leftover picnic basket. The love that Colton has for this girl is evident because he does all of this in dress shoes, which makes me think that the $2 shoe rental I paid at rock climbing last week was complete BS. During the picnic, Cassie begins to have a little bit of a deeper convo, and tells Colton she’s scared of a relationship controlling your life. Again, I ask: “WHAT SHOW DID YOU SIGN UP FOR?” Thinking a relationship controls your life is as narrow-minded as thinking that the cartoon roadrunner is ever going to get caught. Not. Gonna Happen.

Cassie thinks being in a relationship is a risk. That’s not a risk.

A risk is doing the “running of the bulls” with a steak tied to your ass.#thebachelor

At the night portion of the final date, Cassie and Colton have the weirdest interaction possible. It’s just weird because he won’t stop smiling, and she can’t get this “WTF are you smiling at?” look off her face. After saying that she’s open to a Costco sized bag of relationship, Cassie and Colton head to the fantasy suite. Like a boy who’s excited to play Nintendo for the first time, Colton kicks everyone out the room so he can take off Cassie’s “wrapping.” By all indications, there was some ACTION that night. Cassie’s hair looked like she slept in the dryer on “Tumble.” At the after show, Colton wouldn’t confirm that he now knows what the inside of a condom wrapper looks like, but given the fact that he pranced to the hot seat, we can only guess that he did the deed.

The end of the show reveals that Hannah B. will be our new Bachelorette, which also means the amount of teeth you’re going to see on your screen in the coming months will drastically increase.

This has been a tiring, and tumultuous season, and I never thought I’d wish someone got laid more than me.