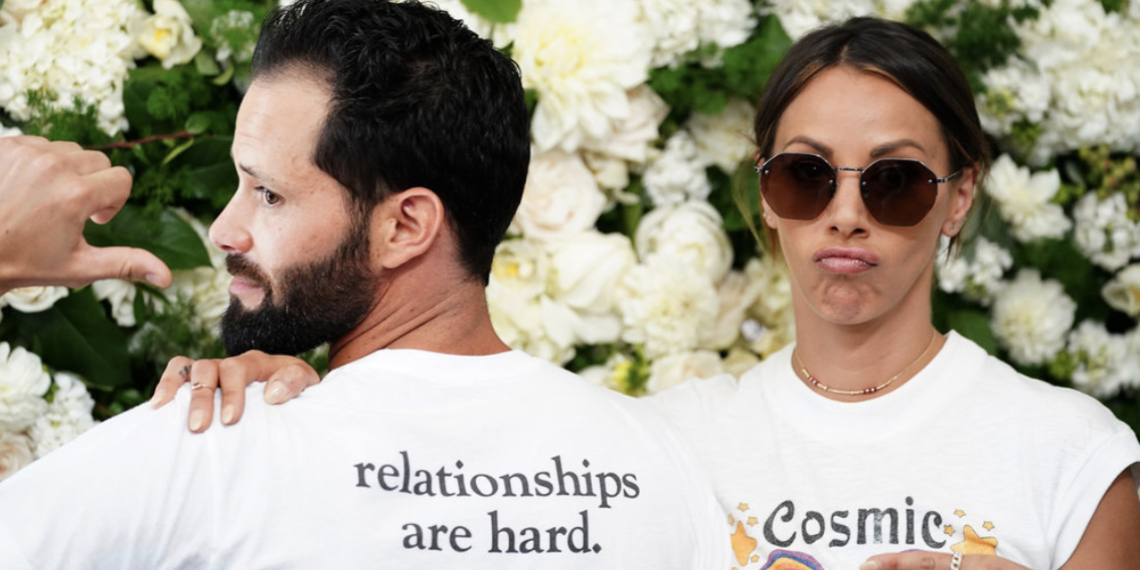 Did Kristen And Carter From ‘Vanderpump Rules’ Break Up?

It was only a matter of time. The relationships on this season of Vanderpump Rules all seemed a little too stable. No one cheated on anyone else in front of an elderly patient. No one got a stripper pregnant in Vegas. Sure, Ariana and Lala had a drunken “moment” in the back of a car, but Sandoval seemed more turned on by that than anything else. High fives all around for girl-on-girl action! It truly seemed like these nearly middle-aged degenerates may have gotten their act together. Enter Kristen and Carter.

On Monday night’s episode of Vanderpump Rules, we were treated to some Crazy Kristen moments, the likes of which we have rarely seen since she screamed at her boss to “walk the f*ck away, now.” Ah, the good old days. And this week we must have hopped in our DeLorean because Kristen got blackout drunk and had a meltdown, 2015 style. While on a girls trip to Solvang (P.S. I am officially accepting rides here on a PJ, rich dudes where you at?) Kristen got wasted at a wine tasting, tripped over a table, ran away, yada, yada, yada, you read the recap, you know the drill. The girls were convinced Kristen was acting this way because her relationship with Carter is circling the drain. And now there are rumors flying that Kristen and Carter have broken up, but she claims they’re working on it. SO WHAT IS THE TRUTH?! My spidey senses say they’ve broken up, but let’s take a look at the evidence.

Kristen appeared on Watch What Happens Live! after Monday night’s Vanderpump Rules, and a viewer doing the Lord’s work asked her about the status of her and Carter’s relationship. Kristen replied, “I bleed out for this show. I show every single second of everything for this show, so for this I’m just going to say we’re…figuring it out.” Yes, you do bleed for this show, Kristen. The audience thanks you for your donation. And for that blood you are rewarded with lucrative Instagram sponsorships and a T-shirt line that looks like it came from the Walmart bargain bin. You’re welcome! You may have also noticed that Kristen used her classic “poor me” routine to avoid giving an answer to the question.

Andy and I remain skeptical:

I’m convinced that by “figuring it out,” Kristen means that they’re figuring out how to lie about their breakup for the next few months until they are contractually permitted to reveal what we’ve all already known for a long time.

It’s also notable that Tuesday, February 19th was Kristen’s birthday. Happy Birthday, Kristen! I hope you finally receive the validation you’ve been searching for your entire life! Carter is still acting like they are together, posting this on her birthday:

Got lucky with this one! She never let’s me take her picture; she said she doesn’t want me to see a bad picture of her. I replied, not possible here’s proof. @kristendoute I love you and every part, especially the crazy ❤️??

Does anyone else get a “methinks the lady doth protest too much” vibe from this post? Like, c’mon Carter, you even love the crazy?! Like the crazy that punched James in the face at a wedding kind of crazy? I DON’T BELIEVE YOU. No one likes a black eye. And oh yeah, Kristen couldn’t even be bothered to like this post. Lolz Carter, looks like your last-ditch attempt to cling to relevancy is coming to an end. You might have to get a job like the rest of us peasants.

When I started writing this article, I thought that outlets were reporting that Kristen and Carter broke up because when I googled it, OK! Magazine popped up claiming “Kristen Doute & Brian Carter Call It Quits.” This is alarming for two reasons. First, if you click the link, the story is actually called “Have Kristen Doute & Brian Carter Called It Quits?” and literally just quotes Kristen’s WWHL appearance. Fake news! Second, Carter’s first name is Brian?! Did everyone else know this and I had no idea? It’s like that time I called a half-updo a zipback to my friends in college and they laughed in my face. My mom told me that was its name! The shame is still fresh.

So let’s be real. We all know that Kristen can take a relationship and beat it to within an inch of its life, so she and Carter very well could still be together. But based on her indifference to BRIAN and his gushy posts and the fact that she probably signed an NDA saying she couldn’t reveal major plot points on the show, I’m betting it’s over. Time to find a new sugar mama, Carter. I think I know someone, how fast can you hang a TV?