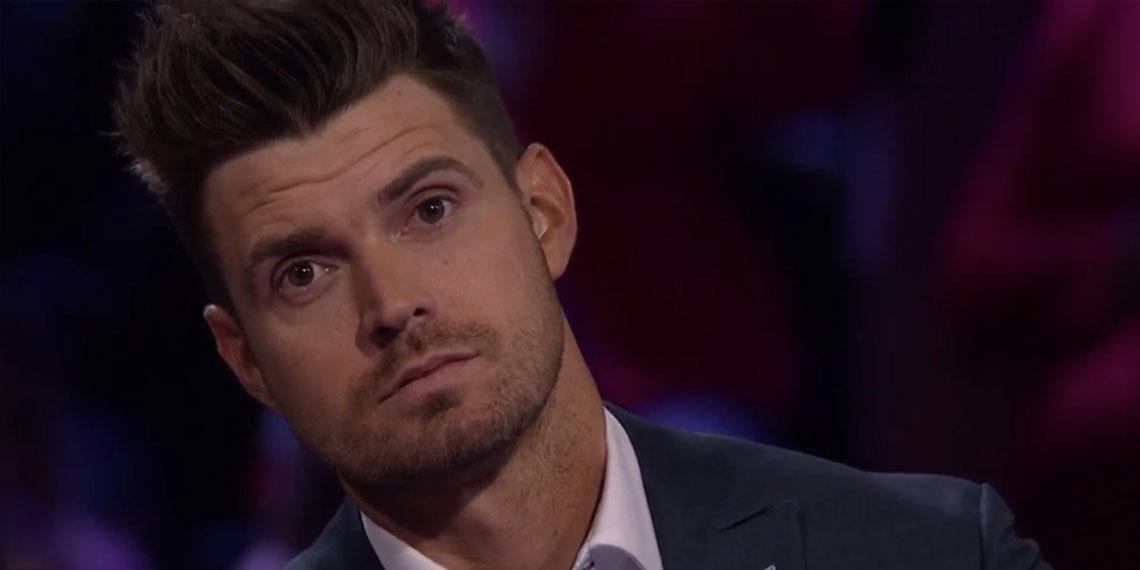 I’ve never been more thankful for anything in my life. Yesterday evening marked the final episode of The Bachelor Winter Games. Four episodes was all America could handle, but definitely less than America deserved. USA! USA!

We get a peek into the Cult Headquarters Bachelor Winter House where all the snuggly couples are wearing footsie jammies, eating breakfast, and soaking up each other’s awesomeness.

Chris Harrison appears suddenly out of the immortal Vermont blizzard and enters the house looking less than amused. Turns out that’s just his face during this entire season of this atrocious program.

Chris informs the crew that not only is this the final week (THANK GOD) but that the couples will also have to compete in an ice dancing competition. He seems v excited at the prospect of additional injuries.

He also enlightens the crew that the winners will be the reigning king and queen of Bachelor world, with the power to strike down hotter better Bachelor world contestants and determine the breakup schedules of others. Ashley breaks into this conversation with “ARE THERE FANTASY SUITES?” Chris Harrison, shooketh, responds with “SLOW YOUR ROLL.” Chris, you was cold as ice!

The couples head out to a practice sesh with their not-good-enough-for-Dancing with the Stars clearly amazing ice dance coaches. Where ABC found MORE people to stoop this low, IDFK. Dean makes a speech about rocket ships and launching time, then we’re treated to a montage of practice and sexual tension.

Back At The House And Bibi’s Blowup

We head back to the mansion where Down Underers’ Lilly (is she REALLY only 21?!) and Courtney are making out in the hot tub, making snow angels in subzero temps, then shocking their bodies by getting BACK into said hot tub. Kids these days.

Meanwhile and away from the hot tub merriment, Jordan tries to have a v serious convo with Bibi about wtf they’re doing after this whole Vermont thing. Jordan is ready and willing to pursue Bibi and a relationship since that would entail leaving Australia where all living things are poisonous and moving to Miami where only the roving gangs of geckos and stray club promoters pose a real risk. Bibi is all “it’s not you, it’s me” so Jordan goes downstairs and angrily washes dishes. This guy gets me. Bibi starts angrily packing but calls it organizing. They chat again—Jordan is all, “what are we doing” and Bibi is all, “chill tf out, I don’t even have my Insta endorsement yet.”

Sister runs dramatically upstairs and Jordan waits dramatically downstairs before, more dramatically, making his way up. There are a lot of tears, then Bibi decides to go home. This is probs the most mature course of action considering a) they’ve known each other for four episodes (probs about 4 weeks real time) and b) live LITERALLY across the world from each other. Jordan also leaves and cries all the way back to Australia.

What commences in the next 10 mins (honestly it could have been 45 … I lost track) is Stassi and Luke crashing into a wall, Dean and Lesley trying to spin each other off the ice, Ashley and Kevin competing to be King and Queen of Canada and ice dancing, and Lilly and Courtney hopping like kangaroos and subsequently eating shit because, hello, don’t hop on the fucking ice.

All of the couples are going on one-on-one dates complete with an optional Fantasy Suite card. Dinner AND potential sex?! JUST like the real world!

Dean and Lesley are up first, and they talk about her double mastectomy and her re-structured boobies. She loves em, which GO GIRL. Dean better not fuck this up. “Never has it crossed my mind that it would deter this relationship.” GOOD JOB, DEAN. This boy has grown tf up. Slightly. Obv they go to the Fantasy Suite and, I assume, have a GREAT time.

Stassi and Luke are next, and her plastic surgery is still v off-putting, but her personality is great. God, I wanna hate them, but these two are cute. Stassi says she can’t do the Fantasy Suite because she “cannot see the shame in (her) mother’s eyes.” DAMN. Are Americans all big whores? We’re a nation of sluts, y’all. Luke assures her that he doesn’t care/it’s totally k and can nurse his blue balls on his own. What a champ.

Yay, time for Lilly and Courtney. They launch into an imaginary convo about this being Courtney’s house complete with all the animals he’s skinned. This would have been good for getting a lady in the mood if that lady were Kendall. Courtney lays it all out and says he’s falling in love andddd Lilly of course reciprocates. Despite their declarations of feelings, they, TOO, sleep in two separate rooms which, AGAIN, does nothing to dispel my feeling that Americans are whores.

Ashley and Kevin OH BOY and we’re having the virgin convo again. She talks about waiting for a nice boy, which, like, yes but c’mon. Treat that shit like a Band-Aid and rip it off if you’re gonna be bringing it up all the damn time. She starts crying again mid-hug because she’s so happy. Does this bitch ever STOP crying? Does Kevin know what he’s in for? After a quick glance at Chris Harrison’s Bang-vitation, the pair decide to go for it. Here’s the room, with the cozy fire and the big cozy bed and …

“Dean has eyeliner on today” — a line that pretty much sums up this whole competition. Kevin stumbles and hurts his knee, potentially putting his and Ashley’s event on the line.

They really do sing the Bachelor National Anthem again, and I think about killing myself.

Dean and Lesley are up first, and for some reason their routine fills me with rage. As the American couple, I expected them to really impress me. They did not. Four thumbs down.

Next are Courtney and Lilly, and their disgustingly cute routine employs weird leg lifts, hopping like marsupials, and adorable awkwardness which has me feeling nauseous.

Luke and Stassi dance to a v Russian number with a split at the end. Way to go.

Fucking finally, newly de-flowered Ashley and Kevin perform a routine full of Chris Harrison’s innuendos about the fact that, yes, they probs did it. Chill Chris, chill.

After tears and blood and sweat and whatever the fuck else, The Bachelor Winter Games crowns Ashley and Kevin its victors. The confetti flies, I cry, and Ashley declares herself a Bachelor success story.

After The Final Fucking Rose

I hope to never see any of you again.

I can’t believe I’m staying up for this shit. CHRISTIAN IMMEDIATELY BRINGS UP THE JACUZZI. Then, we’re treated to a clip show of all the horrible moments from these four weeks I’ll never get back. Chris immediately puts Bibi on the spot and she fights back tears while recounting her relationship with Jordan, who, for the record, is a standup dude. You fucked up, Bibi! Chris speaks more Japanese to Yuki and she declares, “I HAVE GOOD TIME … BEN IS MY BEST FRIEND.” Well, that answers that question.

Declaring that their love was immediate, Lilly and Courtney are still together. These two got an RV and drove across the great US of A together. They went to New York, DC, Nashville, Arkansas (why?), the Grand fucking Canyon, and several other places I can’t remember and taped it all along the way. Apparently, they’ve both moved to LA and are living it up. Congrats, kids.

We welcome Dean in his v American bowtie and Lesley, who is looking fly. After their montage, Dean talks about Lesley’s enthusiasm and Lesley talks about Dean not giving a fuck but being nice. Then Dean TOTALLY PROPOSES TO LESLEY IN FRONT OF A LIVE STUDIO AUDIENCE wait, no he doesn’t. He gives her a key to his house. Wtf? Chris Harrison is always playing with my emotions.

Now it’s time for Stassi from BELARUS NOT RUSSIA but lives in Sweden. Phew. Luke isn’t on stage yet, so that’s not a great sign. Stassi talks about how real it was while at the Vermont mansion and how Luke totally ghosted her after the show. Luke pops out to v limited applause. STASSI INTRODUCES HERSELF AND LOL. Luke tries to say that they had super intense convos about where they were in life, and Stassi is all “was I unconscious during these conversations?” GIRL YAAAASSSSS SLAAAAAAAAAAY.

Luke is fucking scrambling. Stassi is all, “WTF how can you just cut me out of your life” and Luke honestly is such a fuckboY right now. I thought more of him. Stassi is all, “LOL I must have missed when we broke up” and asks Chris to fucking move it along with the next relationship. Thank GOD she didn’t Fantasy Suite this man.

We get a peek back at Kev and Ashley’s v romantic relationship and then welcome the reigning champs of The Bachelor Winter Games. Ashley apparently went to Canada, he went to Boston, and now they’re hanging out in LA which, yay. She talks about the virginity thing and the Fantasy Suite and yah they def did it although they’re playing coy now. Good for you, kids. Setting a great example.

“I never give up on anything.” CLEARLY. Clare, who began way back on Juan Pablo’s season, is def the resident Bach hag who will continue going on these shows until she lands a victim potential mate. She is APPARENTLY in love now, with NONE OTHER THAN Benoit. I knew she’d end up with this guy. Benoit apparently texted her, which led to FaceTiming, which led to Netflix and chilling, and the rest is history. “I’ve always wanted a man who wouldn’t give up on me.” They talk about love and believing in themselves etc. while Clare talks about how he puts up with her crazy. Find you a man who can. Then, in a DRAMATIC TWIST, Benoit totally proposes with a STUNNING ring and some French sprinkled in for good measure. Love is real, you guys. Guess Clare won’t be on next season’s Bachelor in Paradise.