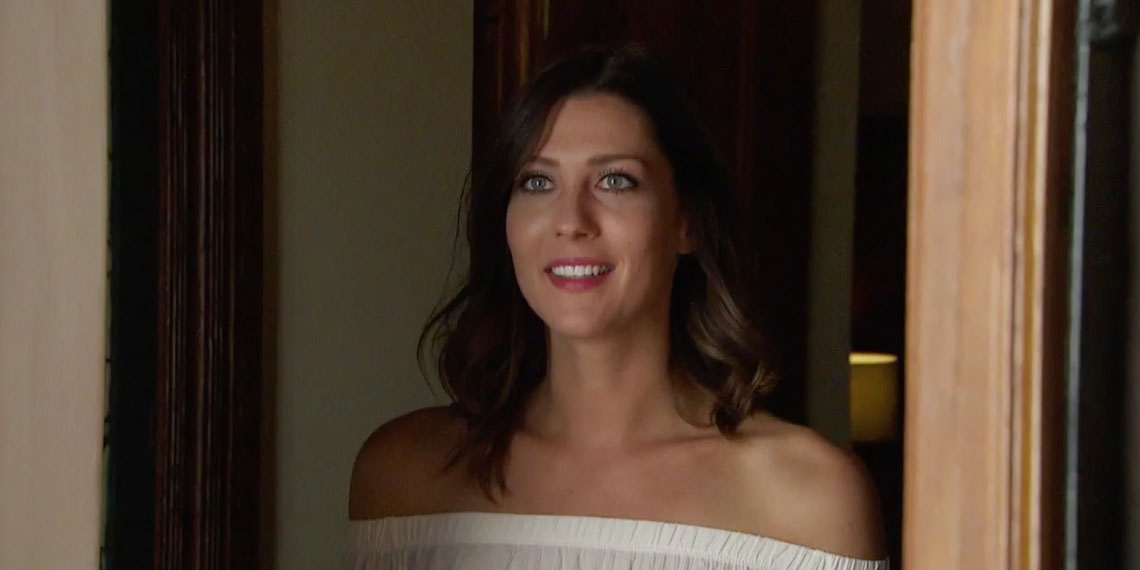 We’re down to the final three women on The Bachelor and I still haven’t seen this supposed “ex” that ABC has been teasing all season who’s going to come in and fuck up Arie’s whole world. It’s like they think I don’t have anything better to do with my life than to sit around and wait for them to deliver me drama in two-hour increments once a week . Whatever. All I know is that if the ex belongs to Kendall then that confrontation better have the sentence “I should have stuffed you when you had the chance” somewhere in there, or else it’s just a total missed opportunity on ABC’s part. A. MISSED. OPPORTUNITY. Anyway. Moving on. Shall we commence to the fantasy suites now?

This week everyone is in Peru and Kendall is dressed like she should be a backup dancer in a music video filmed in Brooklyn. Does flannel on the Bachelor sex date really say seduction, Kenny?

Lol Kendall just goes “this feels like Mad Max” about their dune buggying date. 10 bucks says Arie has no idea wtf she’s talking about. I have a feeling his movie expertise stretches about as far as Pretty Woman or anything in the Nicholas Sparks franchise.

KENDALL: I don’t want Arie to like me just because I’m into taxidermy.

I have a feeling Kendall is a goner. She’s cute and weird but she ain’t ready for marriage and if there’s anything Peter SHOULD HAVE BEEN THE BACHELOR Kraus taught us, it’s that your ass will get dumped if you don’t want to marry someone after three weeks of nationally televised dating, no matter how gap-toothed and adorable you might be

Jesus. I forgot how awkward the fantasy suite cards are. This feels less romantic and more like the beginnings of a Law & Order SVU episode.

ARIE: I’m excited to learn all the things .

OMFG did Arie just ask how she was feeling “emotionally, not physically” and then wink?

Ah, yes. My favorite walking, talking human fembot. I hope this date doesn’t involve water attractions—I fear her circuit board might malfunction and then Arie will never get to bang her!

ARIE: Sometimes there feels like there’s a wall up with her for some reason?

ME: YES BECAUSE SHE HASN’T BEEN PROGRAMMED YET TO FEEL HUMAN EMOTIONS.

“I can’t see Arie ending up with anyone else but me.” – Lauren B. #TheBachelor

Okay, Arie seems super into Lauren for reasons that are beyond me. Like, even when she’s being needy AF she has the facial expression of a brick wall. Tbh I aspire to look that dead inside.

LAUREN: They’ve programmed me to feel doubts and fears and I don’t know what to do about that.

ARIE: Just know you’re here because I am crazy about you.

All jokes aside, Lauren is asking all the right questions here. I’d be fucking livid if I’d already been engaged and dumped before the age of 25. She needs to lock that shit down.

WAIT, WHAT. Did Arie just casually throw out an “I love you”?? This isn’t 2015! You can’t just pull a Ben Higgins and throw out all the rules! *slips into rage blackout* CHRIS HARRISON WHERE ARE YOU?? Drop your Mai Tai and get control of your boy. Thx.
**Somewhere by a pool in Peru**
PRODUCER: Sorry to bother you, Chris, but he said I love you to a girl even though we specifically told him not to.

All of these girls keep talking about how the hometowns changed everything with Arie, and it’s like didn’t all of your parent’s hate/have doubts about him? I guess The Bachelor is like the adult equivalent of me getting my belly button pierced on spring break even though my mother specifically told me not to.

BECCA: Do you have any doubts or insecurities about our relationship?

ME: Well I do because Arie is currently wearing a mock-neck sweater on your date.

Hmm Becca def just brought up her ex… is this foreshadowing?? Or just ABC blatantly beating me over the head with information? Only time will tell.

Sidenote: This bloated walrus groaning into the abyss is the most relatable person on this date yacht date. Just saying.

Okay, what is this tent?? The rest of the girls get hotel rooms and poor Becca has to fuck Arie by a sand dune? Well, I guess we know how Arie really feels about her. It’s that, or production spent their last dime on that yacht date they just went on.

BECCA: I love you.

ARIE: Do we bang now?

WAIT. HE ALSO SAID I LOVE YOU TO BECCA. ARE YOU FUCKING KIDDING ME. Becca’s like “I honestly didn’t expect him to say it back because of the contract he signed with ABC specifically saying he wouldn’t.” Uh yeah, girl, me fucking either.

HAHA Becca just looked around this small-ass tent with the twin-sized bed where her and Arie probably just did missionary with the lights turned off and she’s like “Yeah I’m so… lucky.”

Take a good look, honey, because that is your future right there!

The Last Hour Of This Godforsaken Show

Y’ALL. IT. IS. HAPPENING. The ex-boyfriend is here and he “didn’t know The Bachelor ended in a proposal.” K.

So the ex-boyfriend is definitely Becca’s. Interesting. He’s much cuter than I thought someone from Minnesota would be. I’m not entirely unconvinced the production didn’t hire a paid actor to date Becca for 7 years, dump her, get her friends to convince her to come on this show, and then have him show up on the second to last episode of the season to proclaim his love for her just so we could have this dramatic moment captured on camera. Fellow conspiracy theorists, should we fight this one out in the comments section?

Wow that’s a bold strategy to just show up and knock on Arie’s door. You can tell Arie is just like “fuck, why are you so good looking.

ARIE: My initial reaction was ‘why is hotel management here?’

HAHA. Okay, Arie is one petty fucking bastard. I’d love to have him around for next time I show up to one of my sorority reunion weekends. His underhanded comments would go FAR with that crowd.

ARIE: Do you think you only want her back because of the competition aspect?

I’m such a messy bitch and I am living for this shit rn. Arie keeps talking about how they’ve been broken up for a year and how this is so out of nowhere, but I still regularly drunk dial my ex of five years just to tell him what I had for breakfast, so I don’t really see his point here.

Oh shit he’s actually proposing. He’s really doing it. You know Becca’s just like, “really dude? You couldn’t have said anything before I signed up for this godforsaken show thinking it was going to be Peter?”

This proposal is so awkward. He’s not even looking her in the eye. You know it’s a bad relationship when you dump a guy you were with for seven years for a guy you’ve known for two months who has fantastical hand gestures.

Moving on to the rose ceremony. Fucking finally. It feels like I’ve aged 12 years in this one episode alone. My back hurts and I’m this close to collecting my retirement so I don’t have to show up to work tomorrow.

Also, why is Lauren dressed like she’s going to a board meeting? She must be really secure in that mumbled “I love you” Arie gave her the night before, huh?

Arie is just like “this has been such an incredible week” and it’s like we get it, you got laid three times. We’re just as shocked as you are.

Arie pulls Kendall aside AGAIN. Only this time it’s to dump her for not giving in and saying “I love you.” I bet her sister is watching this at home rn and getting ready to rub that energy reading in Kendall’s face.

Seriously though, I’m really going to miss this psycho. Here’s hoping we’ll be seeing Kenny in Paradise! Can’t wait for next week’s episode to see which girl is going to spend forever with one of The Bachelor franchise’s biggest rejects!