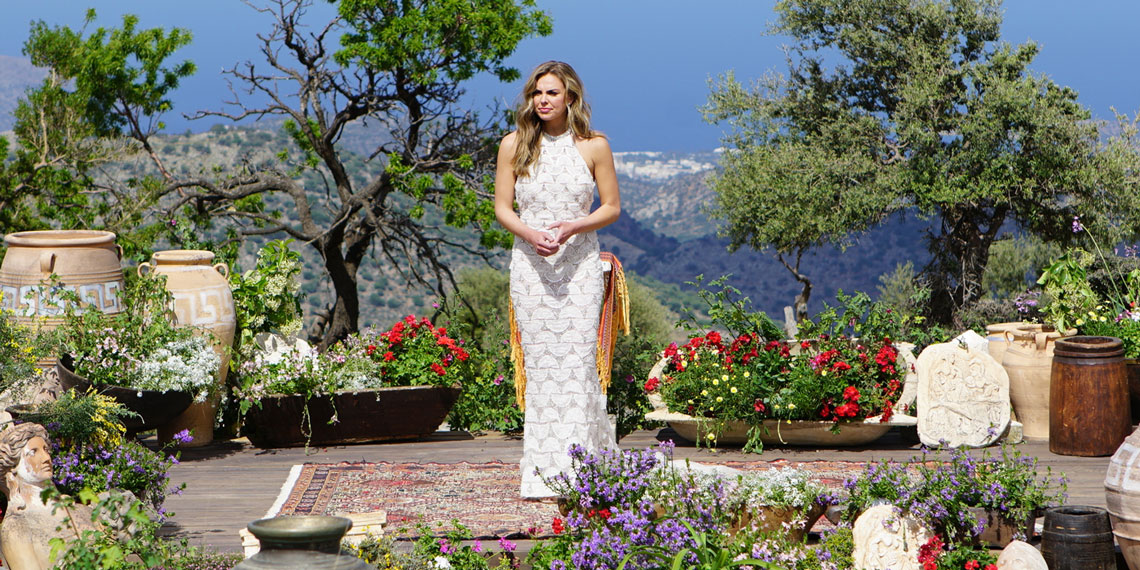 The Best ‘Bachelorette’ Recap You’ll Ever Read: Just Choose Tyler, I Beg Of You

Well, people, we’ve made it. After watching what felt like an extremely long season sponsored by Jesus and steroids, Hannah is down to her final three men: Tyler, Jed, and the pilot she’s 1,000% about to send home with some pity tears and a nice HAGS comment. How we’re at the finale and she still has yet to whittle it down to her final two suitors, I’m not sure, but it’s starting to feel like a real punishment, let me just tell you.

Speaking of punishments, what did America do to deserve this dress two weeks in a row? I’m sorry, but Hannah is the freaking lead this season and she’s dressed like she’s about to lose her virginity in a Holiday Inn after her junior prom. I’m starting to feel like this is a personal attack against me from stylist to ABC’s social experiments, Cary Fetman, for all the times I dragged him last season over Becca’s outfits. Well you know what, Cary? I’M CRYING UNCLE. I give. Now will you please just stop? My eyes are starting to bleed.

Me screaming at my TV drunk in my living room:

But I’m a good f*cking person!

Back at the rose ceremony, Hannah has just sent Luke back to the shower from whence he crawled out of but still needs to dump another guy whilst dressed like a 2007 Pinterest mood board. Rough.

Hannah starts things off by saying her heart is about to be broken by this decision, and I don’t love the way she keeps looking at Tyler. Her eyes look like they are full of regret, like she’s sad she’ll never get a chance to sample that dick or something, and it’s like YES YOU CAN, HANNAH. JUST KEEP HIM.

Peter: But the windmill!!

Wow Hannah is struggling with this goodbye rn. She’s like, “my Barbie played with your Barbie and that’s what love is!” I don’t know what they’re teaching in Alabama, but I’m scared. Thanks to my friend Aubrey who grew up in Alabama—and, until two years ago, didn’t realize dinosaurs were not mythical creatures lumped in with the Loch Ness monster and the tooth fairy, but rather, actually existed—I know all about the “science” they’re teaching in those public schools. But now I’m starting to think their sex ed classes involve dolls with strategic parts of their anatomy missing and a lot of prayer. Aubrey, please confirm!

After Peter gets dumped, ABC cuts to live coverage from After The Final Rose with Chris Harrison. It appears we will be flashing back and forth from the finale to ATFR because ABC loves nothing better than to hold us hostage for as long as possible in the name of “good television.” ABC, you’re on my list.

He brings Peter out to the hot seat, and I love that Chris Harrison gets genuine joy out of rubbing salt in other people’s wounds. He’s like “I see you’re having trouble watching this. I see you crying. Do you want to kill yourself?” CHRIS. You can’t just ask these things on live television!

Meanwhile, Peter’s mom is in the audience and is acting like a national tragedy just happened. I’m sorry but, ma’am, your son has definitely f*cked his way through every Delta flight attendant. I think he’ll survive.

Once Chris gets done doing a pulse check on Peter’s emotional instability, he brings out Hannah to finish off skewering Peter’s love life. Weirdly, this reunion has the opposite effect. Is it just me or is Hannah, like, flirting with Peter? This is not the interaction I was expecting AN ENGAGED WOMAN to have with her ex-boyfriend in front of all of America and Peter’s mom. That is way too much thigh touching for an engaged woman!!

Jesus Christ. Hannah, stop saying hi to his parents! They hate your guts. They offered you their home and their Cuban prayers and you sh*t on it! Plus his mother was just sobbing so have a little tact, Hannah.

Hannah: In the Fantasy Suite I thought it was real.
Peter: I know, I really believed those orgasms were real too.

Okay, Peter’s mom is the ultimate hype girl. Every time they bring up Peter’s sexual prowess, she claps. Like, a lot. Like, more than is socially acceptable to clap for your grown son’s penis.

Chris is like “well on a lighter note, you’ll always have the windmill!” Yes, Chris, as if the poor people of Crete could ever forget how they desecrated one of their fanciest tourist attractions. But thank you for bringing it up once more!!

WHY ARE THEY WHISPERING TO EACH OTHER. They’re giggling over that “four times” comment in a way that makes me think maybe there’s been a fifth or sixth time post-filming?

Hannah with Peter and Chris Harrison last night at the first night of the 2-night live finale event! Hannah’s confession was so hilarious, and impressive if I have to say anything ? @alabamahannah @pilot_pete @chrisbharrison

I mean, TELL me this doesn’t look like they’ve snuck away to the Delta Sky Lounge recently? There is more tea to be spilled here…

I’m going to break the rest of this recap up into two parts with Tyler and Jed’s dates, respectively. I mean, if I were ABC that’s how I would have done it in the first place, but I’ve heard this is also a tactic they use to torture prisoners of war to disorient them and make them lose track of all sense of time, and I know that’s the vibe they go for with these finales.

Tyler gets to meet Hannah’s family first, and my immediate thought upon seeing them is “wow that’s a lot of crosses happening there.” The whole family is giving me Christian rock band vibes HARD, and the dad in particular looks like a youth pastor who wants to tell me all about how bitchin’ Jesus was.

Wow, okay, it looks like Hannah’s mom might be more into Tyler than Hannah is. He walks into the house and her eyes light the f*ck up. She’s breathing heavy and giggling and BLUSHING.

Hannah: I didn’t know if I liked you, Tyler, or if you were just tall.

Ah, yes. Isn’t that all our cross to bear?

After impressing her dad and bringing her mother to orgasm by merely breathing, Tyler gets one more chance  to prove to Hannah that he’s more than just an extremely good-looking man with lots of money and respect for women. What more she could want in a guy, I’m not sure. I believe my list goes something like “hot, tall, rich, and has seen every Veronica Mars episode ever made” but to each their own, I guess.

Tyler’s like “I’m a pusher, Hannah. I push people.” Does he think if he says the word “push” enough she’ll get the subliminal message that he wants to bang in that field?

WAIT. ARE THEY GOING TO DO IT TONIGHT?? I think it might happen! Damn, that subliminal messaging really works. Hannah shows up to Tyler’s hotel room post-date with the sole intent of screwing his brains out, it seems. Though you wouldn’t be able to tell based off that hoodie sweater thing she’s wearing. It’s giving me some serious middle school field day vibes rather than the “come hither” ones I’m sure she intended.

The camera pans out just as Hannah screams “we would have the sweetest family” and then straddles Tyler on the bed. Just when we were getting to the good stuff!

Moving on to Jed’s date. Tyler is a tough act to follow and I’m not just saying that because the pheromones he puts into the world brought Hannah’s mom out of menopause. That said, Hannah does look amazing today. I’m digging this Grecian goddess look, but I don’t like that she’s wasted it on a man who most definitely makes fake YouTube accounts to comment glowing praise on his own music videos.

Predictably, Jed’s burgeoning music career does not go over well with her family. Hannah’s dad asks how he intends to support a family and Jed is just like “um with this?” JED. You can’t just say these things! I’m pretty sure her father wants you to have a more solid (albeit untruthful) plan for his daughter’s security other than just open mic nights and Flat Tummy Tea deals.

Hannah’s dad: And how is your music career going?
Jed: It’s really taking off, sir. I just signed a deal with a dog food company for a jingle.

I SIGNED A DEAL WITH A DOG FOOD COMPANY. Where has this gem been all season?? And how did that jingle go, Jed? Hmm? I’m imagining something like: “Haley, you know where my heart will be. But if I don’t come back, feed the dog for me.”

I love how her mom is just like, “so you’ve been failing as a songwriter for a while now, huh, honey?” Shadeeeeee, Barbara. I can’t wait to get her take on the Magic Mike act that actually pays his bills.

Hannah: Well what do you think of him?
Hannah’s mom: Well he has… qualities.

HE HAS QUALITIES!! HAHA. She can’t even force herself to say good qualities. Even serial killers have “qualities”, Barbara!

I don’t know why Hannah is acting shocked by all of this. Jed literally said his five year plan involved making it big off of kibble. I think that’s how it worked out for The Beatles too, Jed!

Moving on. They spend their last one-on-one date on a boat in Greece. For all intents and purposes this should be the perfect date, but it quickly turns into the stuff of my nightmares when Hannah starts projectile vomiting for no apparent reason.

She’s like “I think it’s the boat and maybe the uncertainty that goes along with wanting a future with a guy who thinks dog food jingles are okay to lead with on his LinkedIn.” In between blowing chunks over the side of the boat, Jed complains about how her dad just doesn’t understand his music. I feel like my friend from high school who now sells Mary Kay products on Facebook has a more lucrative career than you, but please tell me more, Jed.

Jed: I would love you no matter what, even if I met you off the show.
His girlfriend back at home:

And that concludes night one of the Bachelorette finale! We’ll have to wait until tomorrow night to see if Hannah will get her happily ever after or just a future pulling singles out of Jed’s G-string.