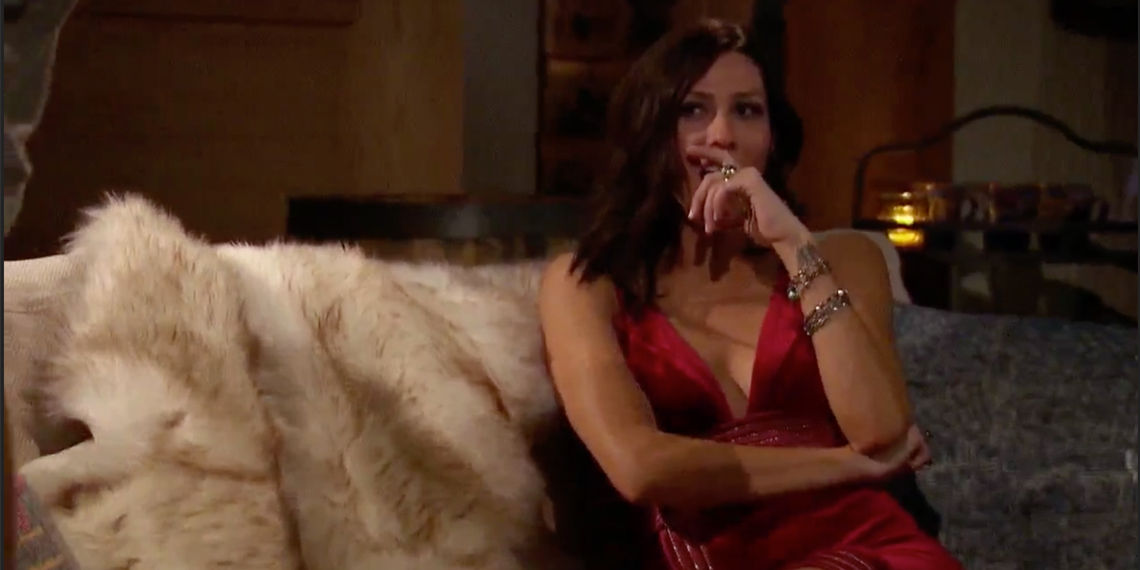 Welcome back for another episode of The Bachelorette! I’m starting to be genuinely concerned that this week we’ll find out Bill Cosby has joined the cast of “eligible bachelors” vying for Becca’s heart. Also, unrelated: ABC, YOU’RE TRASH. On that note, let’s resume with the  week 4 Bachelorette recap, k?

Blake starts off his plea for a rose by discussing how many children Becca should bear him. This is the part where I would send his presumptuous ass packing, but since Becca’s bar for these men is set somewhere around “hopefully doesn’t have a felony,” I’m guessing Blake will stick around for a little longer. Cool, cool.

HAHAHA. I forgot about the chicken guy being in the ICU. Jordan is like “I’m not saying I’m blessed, but I did pray to God for this to happen for approximately the last four weeks.”

David shows up to the rose ceremony and he looks fucking horribleworse than I did after New Years Eve 2016 when I woke up with a half-eaten pizza crust in my bed and several outgoing calls to my ex from six years ago. If having a mangled face doesn’t get the boy a rose, then I don’t know what will.

Side-note: which producer do we think David had to pay off to unscrew some screws in his bunk?

THE. CRYSTALS. ON. THE. BACK. OF. THAT. DRESS. Why God? Why do you test me like this? Becca, you really make it hard to root for you sometimes.

Final rose cut: Ryan and Mike get sent home. I wish I could say they’d be missed, but I genuinely cannot recall one single fact about them.

After Becca cuts the dead weight, she announces that the men are going to Utah this week! Utah!

ME AND ALL OF AMERICA: *crickets*

Okay, but why is Becca really like “I’m so excited to be here in Utah”?? And more importantly, what has she done to be so badly victimized by casting, wardrobe, and now the travel budget?? Please enlighten me, ABC.

Also, didn’t they go to Park City last season? Does ABC have a Groupon or something? Is Ben Wyatt holding their purse strings these days?

Becca chooses the racist, woman-hating, homophobe Garrett for this week’s one-on-one date because she’s “really excited about him.” Do you hear that, ladies? With choices like these, how can we ever end up dying alone with our cats?!

Becca’s like “Garrett reminds me of home. And my dad.” AND HER DAD. I think I just felt Mr. Kufrin roll over in his grave.

Cut back to the house where Lincoln, the suitor who is a literal sex offender, just announced that he believes the world is flat. Is it too late to put him back in his mother’s womb?

Anyways, back to this date. Becca cannot stop gushing about Garrett, and I’m genuinely terrified she ends up with him.

Becca is every girl rn: “Garrett is just so handsome, IDK why. He’s just so tall.” Know who else was handsome, Becca? TED BUNDY.

K this bobsled love story is great and all but it does not compare to the greatest bobsled story of all time, COOL RUNNINGS, amiright?

BECCA: You remind me of my dad! Hope that’s not weird!!
ALSO BECCA:

OH SHIT. Garrett was married before?? FOR TWO MONTHS?! I mean, he honestly takes the sanctity of marriage about as seriously as every other contestant on this show, so I’m not sure why Becca looks appalled here. At least he’s willing to propose!

Garrett describes getting married like the process that goes into a drunken one night stand: “one thing led to another and—boom!—we signed a legally binding agreement to be together for life!”

Wait… is he actually claiming emotional abuse from his ex? I’m sorry, but are you fucking kidding me with this? Garrett’s like “she was a red flag.” YOU ARE A RED FLAG.

Also, LOL at Garrett saying he and Becca share the same values when one of them thinks the Parkland survivors are actors and one marches in the Women’s March. Yeah, this sounds like a long-lasting connection.

This is why this is the only one-on-one date I need:

“I learned a man’s gotta be a lot tougher than the timber he’s cutting,” Johnny Cash. Do I find my Paul Bunyan or am I left in the sawdust? Tune in tonight to find out. #somuchwood

Okay, David has gotta go. I know he has a mangled face or whatever, but I can’t with him anymore. He’s definitely intimidated by this log chopping activity and also his girlish figure. He’s like “this seems strenuous and I don’t know how much I’m allowed to do with my injury.” IT’S YOUR FACE THAT’S INJURED, NOT YOUR ARMS, DAVID.

The men are to participate in some sort of Lumberjack Olympics, and this can only end in someone splitting their skinny jeans. *turns up volume*

Ugh. No one split their pants because the universe truly doesn’t want me to have nice things. But the nerd who invented Venmo somehow bested all of these “former athletes” at the lumberjack games, pulling out a last-minute victory in a climbing competition that was ripped straight from that “I’ll Make A Man Out Of You” scene in Mulan. (Did anybody else think that, or was it just me?) Tbh good for him. If not for this win, I would have entirely forgotten he was on this show.

Moving on to the cocktail portion of the evening. Becca has decided to drape herself in jewels. And by “jewels” I mean whatever was left on the 50 percent off display table in Kohl’s jewelry section. So, it’s starting off strong.

Jordan pantses himself to try and prove his loyalty to Becca. To be fair, she did gift him those gold booty shorts, so I understand his line of thinking here.

Okay, why does Colton have a stick up his ass about this? He’s pissed because Jordan is nearly always nude in Becca’s presence, but I think this has less to do with the booty shorts, and more to do with Colton being a virgin who can’t drive. Let the boy live, Colton!

Elsewhere, Jean Blanc is acting creepy AF. Becca’s like “I’m usually pretty intuitive when it comes to people and something is off with him.”

Oh, you’re pretty intuitive, Becca? And yet you had no idea that the guy who proposed to you was picturing someone else? Riddle me that.

Oh shit, is Becca getting rid of him? Just like that? I feel like some creepy shit must have gone down off-screen to make her kick him out like this. I mean, I know he’s creepy, but didn’t he get the group date rose last week? This feels sudden.

JEAN BLANC: I love you. You’re so beautiful. You’re my whole world.
BECCA: You’re a good guy but I’m just not there yet.
JEAN BLANC: Fuck you, bitch. You’re ugly and I never wanted you anyways.

Jean Blanc is literally every guy who’s ever messaged me on a dating app.

Okay, Becca is losing it over Jean’s little confession. Why is she so shocked that he was lying? He just met her! Of course he was lying! They’re all lying!

Lol the look on Becca’s face as she addresses the rest of these men is priceless. You know she’s starting to think that the rabid wolves that populate wilds of Minnesota might make better company than these degenerates. She’s like “all I expect is honesty from you guys.”  YEAH, YOU AND THE REST OF THE WORLD, HONEY.

Wills gets the second one-on-one date and I’m pissed it’s getting overshadowed by Becca’s sudden realization that men are trash. It’s 2018, Becca. If you want a good guy then you’re gonna die alone!

Okay, this date is actually kind of cute despite the fact that I want to cut her for looking slim AF in those snow pants. They take snowmobiles out and have a fun time freezing their asses off and barely speaking to each other for half the day. It’s like ABC modeled this after my answer to “describe your perfect date.”

Oh GOD. Becca, could you stop bringing up your other boyfriends on this date? Wills is just trying to have a chill time, sipping champagne, and she can’t STFU about Jean Blanc.

I’m watching this date and Wills being super cute and all I can think is that he seems like an actual decent human being. I’m sure tomorrow we’ll find out he murdered his parents or something.

There’s no cocktail party tonight, just a rose ceremony because for once ABC appreciates my time and sanity. That, and they can’t be late for the premiere of their new abomination, The Proposal.

All the men are acting shocked that they won’t get one more shot at bullshitting Becca. I guess they’ll just have to hope one of Becca’s friends showed a mild interest in them last episode and Becca will keep them around to prove something to herself.

Jesus Christ. MY EYES. Becca, what in God’s green earth are you wearing? It looks like she’s wearing couture toilet paper or something. Tbh it’s probably a good thing she nixed the cocktail party, lest some of the men took a longer look at her and realized t maybe there’s other, better-dressed fish in the sea.

This rose ceremony is tense AF. Becca hands out the last rose and it goes to Jordan. The other men in the room look like they got less than 1,000 likes on a photo, but I’m internally cheering. Jordan is the only reason I don’t pass out on the couch every Monday night watching this shit.

Final rose cut: Christon and Nick get sent home. I forgot Christon was even a contestant until just now, but at least he went out with class. You’ll be missed (at least for the next 5-10 minutes until I forget all about you again)!