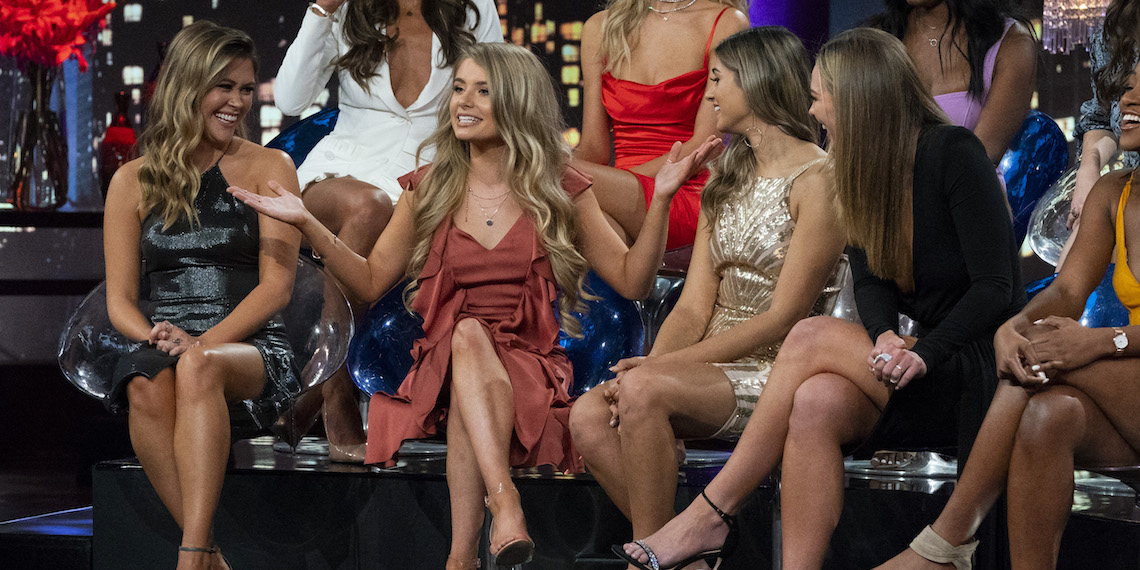 The Best ‘Bachelor’ Recap You’ll Ever Read: The Women Tell All

Welcome to Bachelor…Tuesday! I know what you’re thinking—where’s It’s Britney, Betch?! Don’t fret, friends, she is on a kickball team doing something mysterious and very cool, and will be back next week! I’m just helping out today because I’m such a good friend. And, please, don’t even bother coming for me in the comments saying she’s better and I’m not funny and this is trash yada, yada, yada. Because I already say that to Britney on Gchat everyday, and then again to myself every night. So I gotchu. Now, on to the task at hand, The Women Tell Us Nothing We Didn’t Already Know or, alternatively, Bachelor in Paradise: An Audition. I have my wine, I have my bad attitude, and I am ready to partayyyyyy.

They start off the episode reminding us of everything that happened 24 hours ago, because the producers just assume we all blacked out on Whispering Angel while watching that cringe-fest. Fair. Last night, Cassie told Colton that she’s just not that into him, Colton finally jumped that f*cking fence, and Chris went on the hunt for his runaway Bachelor, like he was a bloodhound racing to find a missing child in a really juicy episode of Dateline.

Chris intros the show, and is giddy that last night “Colton’s worst nightmare” came true. “He disappeared into the dark night of the Portuguese countryside. He is lost to us.” Okayyyyy Chris you’re not penning the next great American novel, you’re just phoning it in on a network reality dating show, I think we can tone down the dramatic prose just a bit.

The women get introduced. I do not recognize half these women, but am pleased to see that Tracy’s eyebrows grew in. Did she invest in microblading?

Okay who TF is Jane?? Now ABC is just trolling me. I see you ABC, and I know she’s a really a seat warmer while Elyse is in the bathroom! Right?

Since Colton’s season continues to give us little to no content, ABC decides to waste our time and throw it back to “the most dramatic” moments of seasons past. They’re going all the way back to Jason Mesnick. Really? Demi wasn’t even born yet when that season was on! Caelynn was still a toddler in a tiara! No one here gives a sh*t. TBH all these flashbacks really do is show us how little emotion Cassie actually felt last night. Her eyes were drier than the Sahara Desert.

Then they decide to show us clips from the season that WE JUST WATCHED. Chris says “there was a lot of drama before the infamous wall jump.” Dude. We’ve been calling it a fence all season. Were you even here?

Oh good, our first shower scene of the evening. Why does ABC insist on making me feel like I’m watching a perv’s secret bathroom camera every episode?

We’re 15 minutes in and it looks like we’re finally going to start!

Chris: What were you thinking when you met Colton?
Ladies:

And now more clips of all the fake feuds we just watched. Look, I may scroll through Instagram for the entirety of every single episode, but give me a little credit. I can look at pictures of balayage and watch Colton dry hump a blonde at the same time.

Chris immediately brings up the Onyeka/Nicole feud, because he would like to drown the audience with Nicole’s tears and finish up early. The ladies basically just hurl insults at each other, and I feel like I’m back at a sorority chapter meeting. Funny, I used to drink through those too.

Nicole: You said I was mentally unstable.
Onyeka: Liar! I said you were emotionally unstable!

Chris then asks Katie why she told Colton that certain women were not there for the right reasons. She tells him she was talking about Caelynn and Cassie. OMG! Katie claims she heard them talking in Singapore on the bus from the airport to the hotel, and they were saying to each other that one of them should “win” and then the other can be the Bachelorette.

Caelynn says Katie is lying. Katie says Caelynn is lying. I’m lying to myself that this hell is almost over.

Okay seriously though, WHO IS JANE?! And why is she defending Caelynn? FYI Jane, even inserting yourself into this dumb feud is not gonna get you on Paradise, honey. Maybe call up MTV and they’ll let you on Ex On The Beach? Different beach, same low standards. I think you’ll fit in well.

Demi apologizes for calling Courtney “the cancer of the house” and changes it to the bed bugs of the house. People may not like Demi, but you can’t deny she was MADE for reality TV. We are blessed she lives during this time. What would have happened if she was born during like, the Victorian era or something? She would have been beheaded SO FAST.

OMG! Courtney just told Demi she has the maturity of a 3-year-old and SHOVED A PACIFIER IN HER MOUTH. Um, isn’t that assault?

Okay now we’re finally getting to the good stuff. Chris calls Demi up to the hot seat. Demi talks about how she is not ashamed of her sexuality and starts shouting, “It’s 2019! I’m promiscuous! Sorry dad!” Aww, that’s sweet. She thinks her Dad doesn’t know. But like, he’s met you?

Chris then tells Demi she was very brave to talk about her mom being in prison.

Demi: I was going back and forth about it, but when I realized I could use it to stay longer, I decided to tell Colton.

Chris asks Demi if her mom is proud of her. Demi says yes and it’s like DUH of course she’s proud! Her daughter was one of the most ruthless competitors in Bachelor history. What’s not to be proud of?

And ANOTHER Colton shower scene. Did you guys know that every time ABC shows Colton in the shower, an angel loses its wings? It’s v sad.

Chris calls Nicole up to the hot seat. Really? Does she warrant more time? We heard her get yelled at for a solid 45 seconds, and got a chance to check out her fresh highlights. That’s all I need to see. Chris pulls out a box of tissues for Nicole, like my therapist doesn’t also do that for $200 a session. You ain’t special, Chris.

Nicole tells Chris she went on The Bachelor because she wanted to make her family proud. Hmm, you didn’t want to try, say, volunteering first? Perhaps going back to school and get a masters degree? No? The Bachelor, you say? Okay. And I’m sure Paradise will make them even prouder!

Wait WTF is this?! Chris basically called Nicole up there to tell her she is getting free Halo Top Ice Cream for a year?! Cool, ABC is literally selling airtime to advertisers now. And to think, when they showed the preview for this segment I thought ABC was going to do something nice for Nicole’s autistic brother. I hope he isn’t lactose intolerant!

AND ANOTHER SHOWER SCENE. My sexual attraction has been so diminished by these I don’t think I will ever find a man appealing again, let alone Colton.

Chris calls Hannah B. up to the hot seat. She looks FIRE and is daring ABC not to choose her as The Bachelorette. Caelynn, the gauntlet has been officially been thrown down, and I think this might be the first competition where you don’t beat Hannah.

Hannah says she feels pressure to be perfect, and has always struggled with it, and has a hard time being vulnerable. Man, whoever wrote this monologue for Hannah really knows what they are doing. It makes me like her, and I hate everyone. Seriously. Ask everyone I work with. They’ll tell you I f*cking hate them.

Chris then gives Hannah a chance to redo her toast that she fumbled during her first one-on-one with Colton. I want to tell you it was better, and that at least she didn’t end it with “roll tide” but then she did, so I can not. Alabama, you all need to get some new material.

Caelynn gets called up to the hot seat. I feel a deep hatred toward her garbage bag cut into the shape of a dress. It’s rare that designers really nail the unique sheen of the Glad brand, but by god they did it!

Caelynn cries while watching her time on the show back. She says it was hard because she felt like she had met her person and then he dumped her. Don’t worry Caelynn, you’re only 23! There’s plenty more disappointment ahead of you love to come!

Caelynn also says that Colton told her he was falling in love with her since Singapore and “That’s a long time.” Oh honey, 72 hours is only a long time to a fruit fly.

Chris does take the time to commend Caelynn for sharing her story of sexual assault on the show. And as much as I really don’t like her as a person, or how Colton responded to her, I will say it was very brave of her, and I do hope that it helped her and helped others. Snaps for Caelynn!

And Colton has FINALLY emerged from the shower, pruny as a spring breaker who fell asleep in the hot tub after a late-night drinking sesh. Does he look different to anyone else? Did he dye his hair? Or is it because he finally put his P in a V?

Chris asks Colton how he’s feeling and Colton says he’s nervous, which surprised him because he thought he would be “cool and confident?” At this point I looked around my empty apartment and screamed “This guy thinks he would ever be cool and confident?!!” My couch and kitchen table both agreed this was absurd. Then we all had a good laugh.

Then Sydney takes one for the team and asks Colton if he’s still a virgin. We’re listening. But instead of answering, Colton takes this time to ask Sydney what the phrase “whack my weeds” means. Colton! You know you are supposed to have sex talks exclusively with Chris or he won’t get his bonus. Why you gotta do him dirty like that?

They transition out of this discussion before we get an answer out of Colton, which is fine with me because now I can stop shrieking in horror over what is happening on my TV screen. I don’t need my neighbors calling the cops on me again. Chris asks Colton about the “fence jump.” Ahhh I see he remembers his line this time.

Chris:  What was going on in your mind as you were running away?
Colton: I can’t believe girls don’t even want to f*ck me when I’m the Bachelor.

Chris assures us that Colton makes it back alive, as if I’m not looking at his basic ass on my screen right now.

ABC then shows us bloopers, which I will sum up for you like this: Hannah G. maintains her lack of personality even when a tent falls on her, Colton gets more intimate with a street dog than he does with Cassie, and places have bugs.

I hope you enjoyed the 15 minutes of new footage we just watched! Next week, Colton’s journey finally ends, and hopefully none of us will ever have to hear a grown man talk about his virginity ad nauseum again. Later!