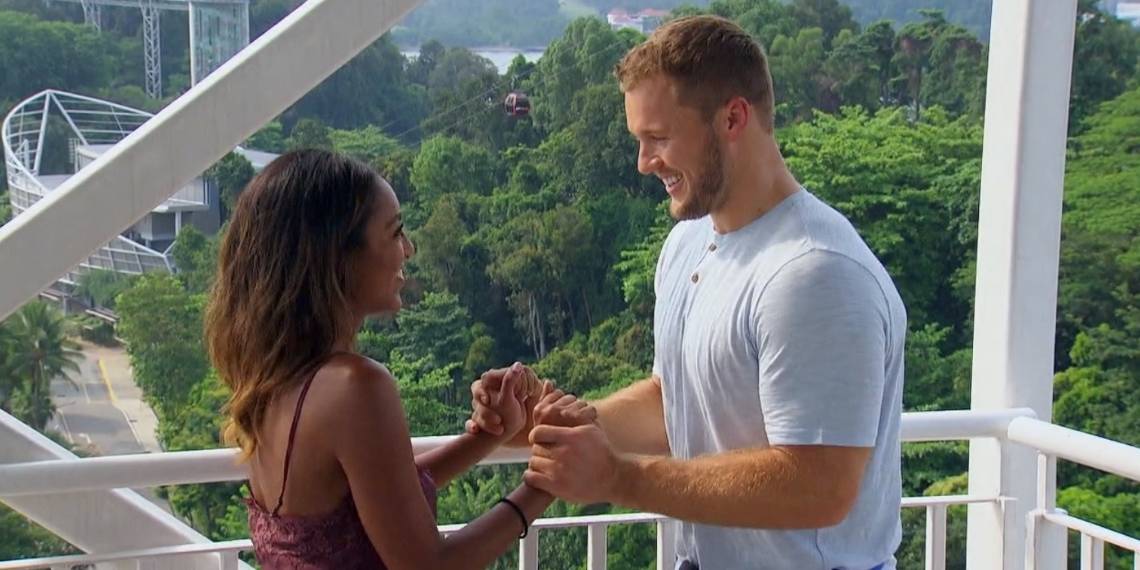 Diggy Moreland’s ‘Bachelor’ Recap: Courtney Is The Chicken Pox Of The House

Another Monday where most of the country is in subzero temps means no one is leaving the house, so might as well watch some Bachelor. We’re on week 4 of this roller coaster ride of a season (sarcasm), which means about half of the girls are at home thinking of the best IG caption for them to sell that Dyson hair dryer that they can’t live without. (Newsflash: The dryer is about six months old, and you were living before then, so who’s the liar?) Let’s get to it, because I need to go to Whole Foods before I go to bed.

The episode kicks off after last week’s rose ceremony with all the girls having a pow-wow in the living room about how they’re all running out of outfits, and they need to start switching so they don’t repeat. While eyeing up who might be their size, Chris Harrison walks in to tell them it’s time to go to Singapore! A few problems with this: 1) They only find out ONE hour before they leave for Singapore? I hope they aren’t flying Southwest because just finding out one hour prior to flight time with no check in? They’re for sure boarding in group Z. 2) What happened to the baby step cities first?? ABC is now going from the Bachelor Mansion to directly around the world? Something tells me they got a good deal on Spirit Airlines and it was too good to pass up.

Colton and the ladies arrive in Singapore, and Colton’s opening outfit alone tells me he flew across the world and didn’t check a bag, but hey, that’s none of my business. The ladies grab a group drink at Applebee’s Singapore, and then head back to the hotel for some date card action. The date card comes, and it has Tayshia’s name written all over it for her first one-on-one. If I could translate the looks she was getting from her cohorts, they would say: “Take your sh*t with you, because if you don’t, we’re gonna have your suitcase swimming with the fishes.”

Prior to his date with Tayshia, Colton does another one of these creepy Skype interviews with us, reassuring us that he is the Bachelor and isn’t going anywhere.  After a quick contemplation walk on the beach, Colton and Tayshia find out that their “taking love to new heights” involves bungee jumping. (Pause right here: I would need several clean pair of drawers on standby, because me sh*tting my pants on this date would definitely happen multiple times.) Colton and Tayshia both completed the jump, and I can with 100% certainty say Colton did not sh*t his underwear…only because he doesn’t wear any.

Back on solid ground, Tayshia dons a red one piece on the beach that no doubt helps Colton live out a Wendy Peffercorn fantasy from his childhood. (That’s a Sandlot reference, in case you’re too young to know). They then run into the ocean to make out and Tayshia intentionally almost drowns him, giving her reason to perform mouth to mouth.

On the night date looking AMAZING (Tayshia fan here), she admits to being married and divorced recently. Colton gives her a sincere response that had to have been written on cue cards, and Tayshia eats it up. He gives her the rose to solidify that she’s safe, and they celebrate in an amusement park where everyone’s pissed because they shut the place down to film. Back at the Holiday Inn Express, the rest of the Gossip Girls get their fate via the next date card. I don’t have enough characters to tell you who’s on this THIRTEEN girl group date, but I’ll tell you who’s not, Caelynn. Yes, this next date will be chauffeured by your local Greyhound bus.

Colton takes this parade of girls on a walk through the market and it has all the locals wondering why the Pussycat Dolls are walking through the streets of their city. They make a pit stop to have leeches suck out their souls, and it proves not to be effective on Demi since she doesn’t have one. Later, Colton and Cassie get their fortunes told which reveal that Colton and Cassie may be brother and sister. Either this is fake, or the Bachelor casting team was feeling REALLY messy this season.

The night portion of the group date brings us to our new potential villain: Courtney. Who is Courtney, you ask?? Good question. I don’t really know how to describe her, but just know when she speaks, she doesn’t move her top lip. Everyone gets their time with Colton (Demi goes twice) except for Courtney, and she cries like I did when Barack left office. Demi tells her “Get in there and fight for what you want,” and this marks the only time I’ve ever liked Demi. Okay, over it. Back to hating her now. Demi and Courtney throw verbal jabs, but none of them are willing to physically fight because they both have tags on their dresses that are definitely going back. Demi gets the group date rose, and Courtney has the sad face of someone who just walked up to Chipotle and realized it’s closed.

Caelynn one-on-one time! The girls do a send-off for her, which is always awkward, because all the girls definitely want her to trip down an escalator that’s going up. Anywho, she’s greeted with an old school Bentley (proving that Singapore Ubers  > American Ubers) and is whisked away for a shopping spree. Colton takes her to a store that looks like the Express of Singapore, and she gets a ton of things that will clearly make the other girls want to kill her.

The night portion of the date is a tearjerker (yes, I cried), because Caelynn opens up like we’ve never seen before. She talks about how she was drugged and raped in college and the lasting effects of the experience. Colton listens attentively, and does his best to console her and let her know that she is safe with him. No doubt this took their relationship to the next level, and you can visibly see that she’s there for the long run.

Let’s get to these cocktails! Hannah G. is up first and she gets some alone time in Colton’s bedroom. Colton claims to have OCD…but they BOTH have their shoes on in the bed!! OCD?? Yea, the lie detector determined THAT was a lie! WHO RAISED YOU?!?

PSA to My Future Girlfriend:

You get in my bed with ya shoes on? You just broke up with me. And I’m calling the police. #thebachelor

Next, Caelynn grabs Hannah B. to clear the air, and this potential interaction alone tells me someone should have dialed 9-1-and have their finger ready to press the other “1.” They both maturely agree to be cordial, because they’re both just interested in a NFL player that could be their meal ticket. Oh wait…

Demi spends her one-on-one time telling Colton that she was “attacked” by Courtney and that she is the “cancer” in the house. Courtney may be a lot of things, but cancer? Nah. She’s more like the Chicken pox of the house. Annoying, but you know it’s going to go away eventually. Enough of this, it’s finally rose ceremony time.

Already safe are Tayshia, Demi, and Caelynn. Okay, time for heads to roll. The roses go according to plan, and since they get no air time, I want to remind you that Kirpa, Heather (“Never Been Kissed”), and Kate are still there and receive roses. Fighting for the last rose are Onyeka, Tracy, and Courtney, and Onyeka gets to stay for another week. Proving my theory wrong about Tracy being the chaperone of the group, she gets to head back stateside with Courtney. Chicken pox isn’t curable in Singapore, so it’s probably for the best.

Next week’s episode shows Colton walking on the beach in dress shoes, so I already know I’m going to hate it. God help me…