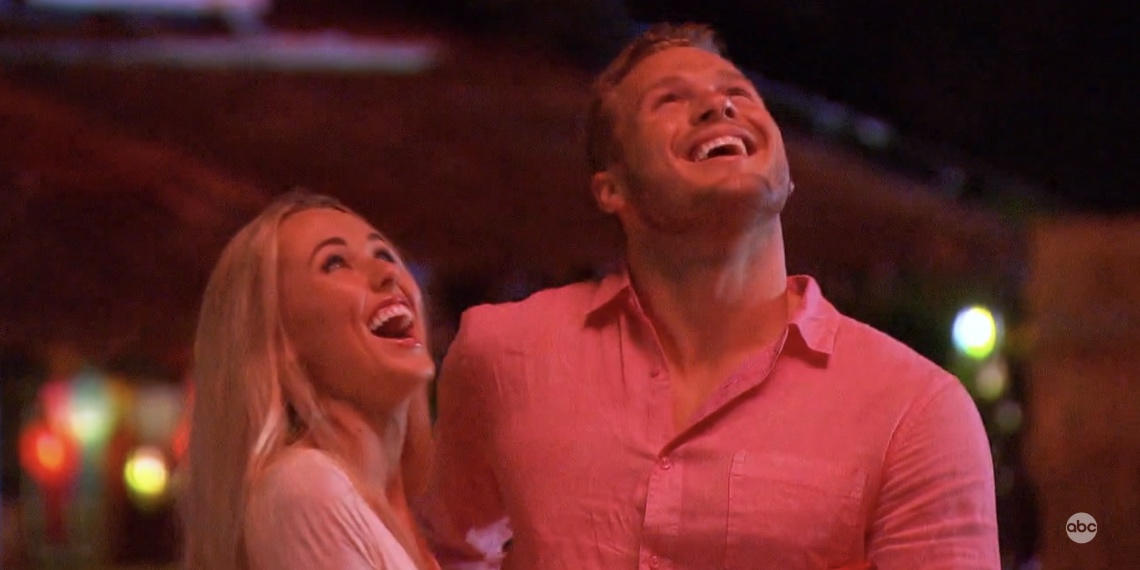 Welcome back, Bachelor fans, to another Monday where we get to watch a grown-ass man defend his sexual choices (or lack thereof). I would stand up and cheer if I weren’t so disgusted. I’m going to skip all the bullsh*t and just jump right into this week’s recap because, and I say this begrudgingly, this week was actually pretty dramatic. I’ll give you this one, Chris Harrison! Just one!

This week the Bachelor crew is headed to Thailand, and we know this because the ladies literally won’t shut up about it. I love how they keep emphasizing how beautiful Thailand is. They’re all like “this place is really beautiful, this is where I can see myself falling in love” and it’s like they have no appreciation for the that Marriott in Singapore anymore. What, you’re too good for a continental breakfast now?

Yeah, I get the sense that there won’t be any back alley witch doctors on today’s date, but a girl can certainly dream.

Okay, did y’all SEE the way she just greeted Colton? She literally just straddled him and you’re telling me she’s never kissed anyone before? Really? That’s the story you’re sticking with, ABC?

Wait, did she just say she’s been in relationships before? I’m sorry, but do we think Heather thinks the word “kissing” actually means sex? She must not know what this word means because I’m not buying this bullsh*t. She may have never kissed anyone before but she has certainly dry humped someone to completion. Please.

They’re date involves exploring the a Thai market but I can’t even pay attention how fun and cute this date is because of the sounds coming out of Heather’s mouth every five seconds. Like, what is with all the moaning? It’s like just like in When Harry met Sally if Sally were a deranged Barbie and Harry was secretly gay.

HEATHER DESCRIBING HERSELF TO COLTON RN:

Heather keeps talking about how she just never found the right person to be her first kiss and yet it sounds like she’s had plenty of opportunities to kiss someone. I’m sorry, but did she just say SHE DATED SOMEONE FOR EIGHT MONTHS AND NEVER KISSED HIM?? Like, that’s not a relationship, that dude is your friend.

Heather gets a rose and a kiss from Colton. God this scene is so awful I want to set myself on fire. Was it worth the wait, Heather? Or did you throw up a little in your mouth like me?

When he kissed her and you know every girl in America just went apesh*t for Heather’s first kiss. Like, I’m willing to bet there was more energy for that kiss than there was for Super Bowl. I mean, at least Heather scored. We can barely say that about Sunday night’s game.

Back at the hotel, Elyse is freaking tf out. She’s been slowly unraveling all episode and I don’t like it. I was really rooting for her and her flawless complexion and now she’s acting like she doesn’t understand the premise of this show. Like, OF COURSE Colton is going to play the field but that doesn’t mean he’s not going to try and squeeze in 5-7 minutes of one-on-one time with you at the next cocktail party, Elyse!

Okay, whattttt is happening. She just left the hotel looking amaze but also like she knows she’s about to ruin her life. It’s a face I frequently wear when I’m going out for “just one drink.”

DEMI: Nobody knows what’s going on.
ME YELLING AT MY DOG ALONE IN MY APARTMENT: I BET THE PRODUCERS WHO ORCHESTRATED THIS KNOW, BUFFY.

Elyse shows up at Colton’s condo and damn she looks great. I still can’t get over it. She walks in and immediately starts losing it. Oh, I really don’t like where this is going. OMG. Guys, did she just give him the “it’s not me, it’s you” speech?? I’m so confused. I thought she was having jealousy issues like five seconds before this?

Elyse leaves but, like, why though? Is she not really into him? Or was she just scared she might get sent home before Demi. WHAT IS THE TRUTH.

The group date is already starting off on a high note: with Colton sobbing into his protein shake, wailing about how no one loves him. Which, coincidentally, is exactly how I like to start my day as well. Carry on.

For the group date the ladies have to survive for a day out in the jungle! I’m sorry, but is Colton trying to kill the women off one by one? He’s like, “I want a woman who will go on adventures with me so I think I’ll make the ones I’m not sure about scavenge for food and water and see if they make it out alive.”

He breaks the girls up into groups and makes them scrounge for banana leaves and fresh water. It’s at this point that Demi and her group decide that they would rather be at happy hour than digging for worms AND SO THEY F*CKING LEAVE. Lolololol. Y’all, I’m dead. Demi ditching the group date to find AC and a margarita is the energy I want to bring into 2019. She is the gift that keeps on giving.

So how much do we think this tour guide wants to set himself on fire rn? Demi all but spits on his culture with those burger wrappers and Bud Lites she brought into what I’m sure is some sort of protected Thai land and you can practically hear his internal screaming.

Moving on to the cocktail portion of this evening. We’re three seconds into the night and Demi decides to cut the awkward group date tension by casually mentioning that all of the women showered together before the party. Damn. Are there any tricks in her bag that she won’t pull out?

Alabama Hannah pulls Colton aside early on in the evening and he tells her that he would choose her to help him survive a zombie apocalypse. Which is funny because wasn’t her first instinct when it came to surviving in that jungle to flee the scene for 2-for-1 margaritas?

Hannah tells Colton she’s falling for him and it’s exactly that kind of thinking that will get her through at least two more rose ceremonies. Like, this girl knows how to read a room and she read the desperation seeping out of Colton’s sweaty pores real well. Snaps for you, Han.

Oooh interesting. Onyeka says that Elyse spilled some tea about Nicole before she left and now she wants to bring it to Colton’s attention. I don’t like how she’s dragging Elyse’s good name through the mud. I have a feeling that “Elyse” didn’t let something slip so much as a producer in a red wig let something that was concocted and pre-approved by ABC slip, but okay.

ONYEKA: I don’t want to be a pot stirrer but I just respect and like Colton so much.
ALSO ONYEKA:

Onyeka tells Colton that Elyse heard Nicole say she was using Colton to get out of Miami, which is silly because there’s also the FabFitFun boxes to consider! Also, let’s not act like Miami is some bumblef*ck town in the middle of nowhere. If Nicole really wanted to “get out of Miami” so bad, she could just…go. Colton takes this news with about as much stride as a person can who, two seconds after this conversation ended, had to ask the producers who Nicole even is.

OMG this is so awkward. Apparently Elyse misunderstood and Nicole never said anything like that so Onyeka just f*cked Nicole over for nothing. Onyeka doesn’t look the least bit fazed by this new development and continues to sip from her martini as if none of this is any of her concern. She is a hero.

Cassie gets the second one-on-one date despite the fact that just last week a psychic told her and Colton that they were siblings in a past life. If anything, Colton looked more turned on by that fact. For the date they’re going on a boat tour of Thailand, though it feels more like they’re seeing more of the back of each other’s throats than anything Thailand has to offer, but okay.

I will say these two have the most chemistry I’ve seen and I’m not just saying that because he grabbed her ass on national television. These two have not stopped sucking face for the entirety of their date and I’m slightly worried about their oxygen levels. Are they ever going to come up for air?

Colton removes his hand from her ass long enough for them to talk about the fact that Colton is a virgin and Cassie is not. I feel like she’s just inventing problems rn. This feels like when I had to make up hardships for my college admissions essay because I had no family tragedies to write about.

Okay, WHAT. Why are they in bed together?? This escalated quickly. Like, do we think they’re wearing pants under there? Or is the blanket just strategically placed to hide the fact that he’s (not) getting an erection?

The date ends with Cassie getting a rose and Colton getting an over-the-pants hand job. Everyone leaves happy.

The rose ceremony is here and it is awkward. Nicole and Onyeka’s beef with each other is making my tummy hurt more than more than the entire block of cheese I consumed while watching this.

Okay, but why does Nicole think trash-talking Onyeka is going to make Colton keep her? The drama starters never make it to the end, especially not the ones who have said three sentences the entire season! Honestly, I feel like both of them are going home.

Lol I love how Onyeka is not not admitting that she didn’t emotionally bully Nicole.

OMG. Colton goes to break up the fight and he looks piiiissed. Y’all he was just trying to enjoy his last night in Thailand!! Have you no respect?

OH SH*T. Colton walks off mid-fight and he’s not coming back. As I said before, I really do think this is the end of the line for Onyeka and Nicole. If there’s one thing Colton can’t stand, it’s not being the center of attention for five f*cking seconds.

We’ll have to wait until next week to see if Colton finishes the rose ceremony of if he’ll continue to cry on that sand dune. I know which outcome I have my money on. Until next week, betches!