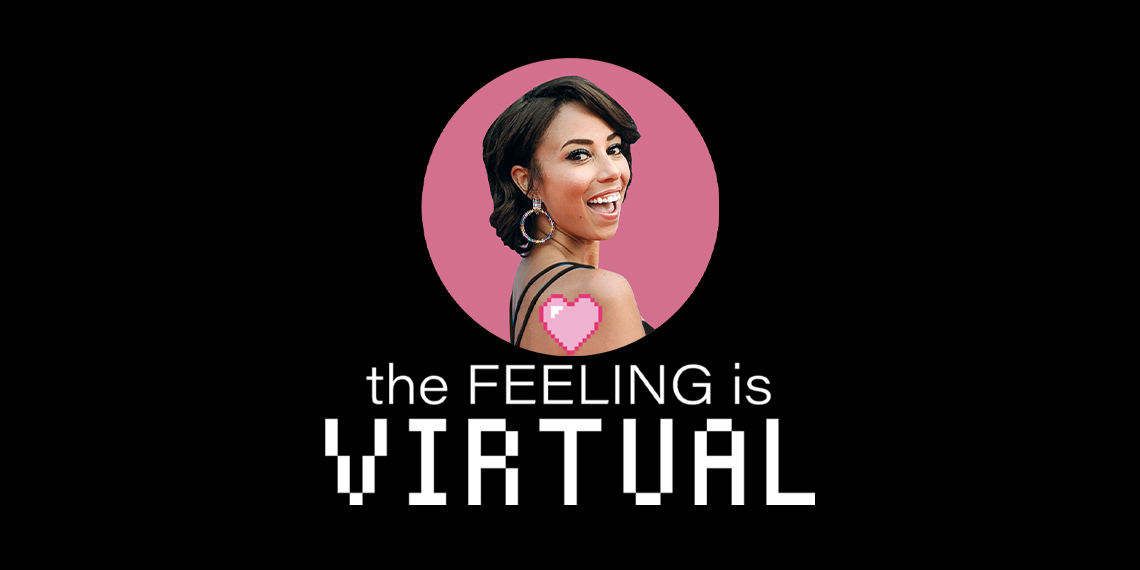 A Breakdown Of ‘The Feeling Is Virtual’ Contestants

Here we all are, three months into quarantine with nothing to look forward to except for the clock striking 5pm so we can pour our first glass of wine. Listen, I know a lot is going on in this world and I do not want to be the person who complains about trivial things, but here I am… complaining about trivial things. Not enough people are talking about how there’s going to be a mega lull in what’s on television because nothing is filming. We know The Bachelor had to push back Clare Crawley’s season, they stopped production on The Handmaid’s Tale, and every other show’s reunions are happening on Zoom. As a 30-year-old gay man who has little else to look forward to, I naturally began to panic. BUT fortunately for me, and all of you, Betches has decided to not let a little worldwide pandemic get in the way of a good old fashioned dating show, and we’re taking you on our journey.

We all know and love our resident meme queen and co-host of The Betchelor podcast, Kay York City (aka Kay Brown), and know she deserves to find all the love in the world! Tired of waiting for the right guy to stroll through her living room in New York where she is quarantining, we decided we’d bring the men to her through an online dating show we’re calling The Feeling is Virtual. Get it? We had a lot of applicants, but only a few were worthy for the chance to win Kay’s heart.

These are the lucky men competing for Kay’s virtual love through a series of Zoom, Instagram Live, and FaceTime dates. Will we get to watch them make out?? No. Don’t be f*cking gross. But we will get to watch them get embarrassed about their old IG posts and avoid awkward questions without being able to leave the room!

Now that you have some background, let’s get into our batch of single hopefuls:

If I’m being honest, at first glance Ravindra didn’t seem too exciting to me. A 29-year-old accountant from Hoboken, New Jersey is pretty much everyone in Hoboken. If you’ve never been, it’s kind of like New York’s Financial District—aka a bunch of guys in suits drinking beer and saying “bro.” But with an Instagram handle like @champagneravii, I knew there had to be more than meets the eye, and I was not disappointed.

A deep dive of Ravindra’s Instagram revealed an explorer with a sea of corny captions, and if there’s anything that makes me say, “awww, he’s sweet,” it’s a dad joke in an Instagram caption. This man literally has traveled the entire world. Like, walking through glaciers, snorkeling the Great Barrier Reef, white water rafting in the biggest commercial waterfall in the world, and luging in New Zealand. If this was Sex and the City, he would be the Russian guy Carrie moves to Paris for…but let’s hope things work out better than that for Ravindra and Kay.

Come through, cute redhead! I’m a sucker for red hair, and this particular redhead is incredibly handsome and outdoorsy, like the lead romantic interest in a Hallmark movie. While his glasses add to his Seattle aesthetic, I can’t help but imagine the moment he takes them off and lets his hair down before he and Kay share their first foot-popping kiss. His casting video started with a rhyme, which normally would send me running for the hills, but something about his Pacific Northwest vibe makes using poetry as a pick-up line all the more romantic. Plus, he loves riding bikes and all of that cutesy bullsh*t, and as someone who loves movies about the outdoors, I’m totally into it.

2019 was a crazy year for me. had 3 different jobs, i moved 3 times in the same borough, i shot my first independent film, and much more. can’t wait to show the world what I’ve been working on. one thing i learned is that if you don’t do anything, absolutely nothing will happen. ain’t nobody calling you or knocking on your front door with opportunities. you gotta be hungry! stay tuned.. 🎬 #bjp #kyp

Ah, to be 25 again. The youngest of our contestants, Rodney has a glimmer of hope about him that is hard to come by with anybody that’s lived longer than 26 years and gotten kicked off their parents’ health insurance. A director, actor, and writer who isn’t afraid to talk about his sister being his best friend is definitely something that we all can get down with. Am I saying that because he can potentially make me a star? Absolutely. But I’m also saying it because he’s like… super attractive.

Halfway through Jake’s casting video, he realized there was a stuffed seal on the shelf behind him, and in a weird way it was very charming. What’s better than a software engineer who notices a stuffed seal behind them during their casting video, blushes, and then hides it before going on about what an amazing woman Kay appears to be? I don’t want to sound too materialistic here, but Jake is a software engineer… and that means money, honey. I know Kay’s looking for love, but I’m not. I’m looking for cute, rich, and sweet, all of which are boxes we can check off for Jake.

. . Today in class we spoke on the word CLIMB. . . How when living in a city that is moving so fast, and sometimes unattainable, that we feel our goals slipping away every day. . . So how do we CLIMB? How do we reach our goals, and work towards the top of the hill when negativity is weighing us down? . . I challenged todays class to CLIMB every minute in class. Push the pace tempo on every run 0.1 to start, and finish 0.3 higher in every sprint. . . I challenged the bags and the weights to push themselves in combos that they seemed timid to try, and exercises that were out of their daily routines. . . Today I got to climb. I witnessed a client who at one point was terrified of the treadmill, hit their PR sprint in the double digits. . . Today I saw someone CLIMB right in front of me, and they didnt do it for anyone else besides themselves. . . As a coach that is the greatest CLIMB I have reached in my career, and I look forward to CLIMBING these mountains constantly with you all @gritbxng . . . So thank you @shes.got.grit , @dylanzanker , @realbillzanker , and the entire @gritbxng for allowing me to CLIMB to my highest potential. . . NEW SCHEDULE FOR THE REST OF OCT! MON: 7:30PM TUES: 4:30/6:30PM WED: 5:30PM/8:30PM THURS: 6:30PM FRI: 6:30PM SAT: 11:45AM SUN: 9:30/11:45AM . . Thats right. 7 days to CLIMB towards your goals with me! . . COMMENT BELOW ON YOUR OWN FITNESS CLIMB! Lets elevate together! . . 📸: @jorgeq . . #ownyourgrit #gritbxing #gritbxng

A fitness instructor who works for Google? Yes please! Not only does Anthony appear to be superbly attractive, but a quick browse through his Instagram gives me a sense that he’s a genuinely kind person who cares about issues that affect the world. He even stripped for charity once! With the highest follower count of all of Kay’s guys, I was afraid we were going to encounter a hot guy with no substance behind him, but thankfully that doesn’t seem to be the case. Though many of his photos are in muscle shirts and backwards baseball caps, a lot of his photos are also shirtless and he has a nice smile, so it’s totally worth a thorough browse through his entire feed! With what little we have to look at before actually getting to know these guys, I’ll settle for what Anthony’s Instagram has to offer.

Never needed a haircut more in my life 😫

Okay, so Brad from D.C. has something that a lot of the other guys have yet to convey via Instagram, and that’s swagger. Nothing melts me more than a charming guy with swag, so I needed a minute after scrolling through his page. While he posts a lot of TikToks—which I would usually find incredibly cringey—he can actually dance and doesn’t look like a fool. In a video posted to his Instagram from his apparent podcast, he talks about sliding into a girl’s DMs, which initially was a red flag, but tbh who hasn’t been sliding into DMs during quarantine? And I, for one, would not mind if he slid into my, err, sorry, I mean into Kay’s DMs.

Out here they call me Le Paigé 🇫🇷

Is Ryan the “hot” one of the season? While he is very aesthetically pleasing, his Instagram doesn’t offer a whole lot of insight into who he is or what he’s about. We know he’s a realtor, which if I’m judging by reality television, means he does pretty well money-wise. He also has great hair, a great smile, perfect teeth, and an amazing apartment. So I mean, yes he is objectively hot.

There appear to be a lot of photos with him and an ex-girlfriend on his page, which means one of two things: either he is not over this beautiful ex of his OR he is over his ex and doesn’t take social media too seriously. As someone who is addicted to their social media presence, I find nothing more attractive than a man who couldn’t care less about it. It probably has something to do with the fact that I know he likes me for me and not my social media presence, and also that I’ll always have more followers than him, so I guess Kay will have to decide if those are traits she’s looking for! Or maybe he’s still into his ex and this will all crash and burn! Only time will tell.

Yes, Hallie. I will be your Maid of Honor.

Ah, Alex. How little you post on Instagram makes you quite hard to figure out. In his casting video he explained that he wants to drink multiple bottles of wine with Kay and just talk about stuff, which makes him a man after my own heart. Maybe things won’t work out with him and Kay in a post-quarantine world. He lives in Chicago, Kay lives in New York, but who knows, maybe one night after a bottle or two of sauvignon blanc, he’ll book a plane ticket to come propose!

With eight very eligible contestants, Kay will have a hell of a time deciding which one of them is the next Mr. York City. It’s not a spot that I envy, per se, but I don’t not wish that one of my biggest problems right now was having too many men wanting to date me. I can’t wait to see who Kay picks, and would like to publicly state to Kay: whoever you do not choose, please send them my way.

Watch the latest episode of The Feeling Is Virtual to find out who made the cut and who got blocked.

Welcome back to The Feeling Is Virtual. This week, @kayyorkcity goes on her first group date to get to know the guys. The winner gets live one-on-one time with Kay, which is happening Thursday at 8pm ET right here on IG. This also means it’s time for our first elimination. Get ready to slide in those DMs if your fave gets sent home—well, he was already home… you know what we mean. ⭐️: @fatcarriebradshaw @rodrixo @jake_magid @whats_his_ethnicity @kerryahecker @champagneravii @yo_soy_jewski @anthonycrouchelli @paigeybaby23