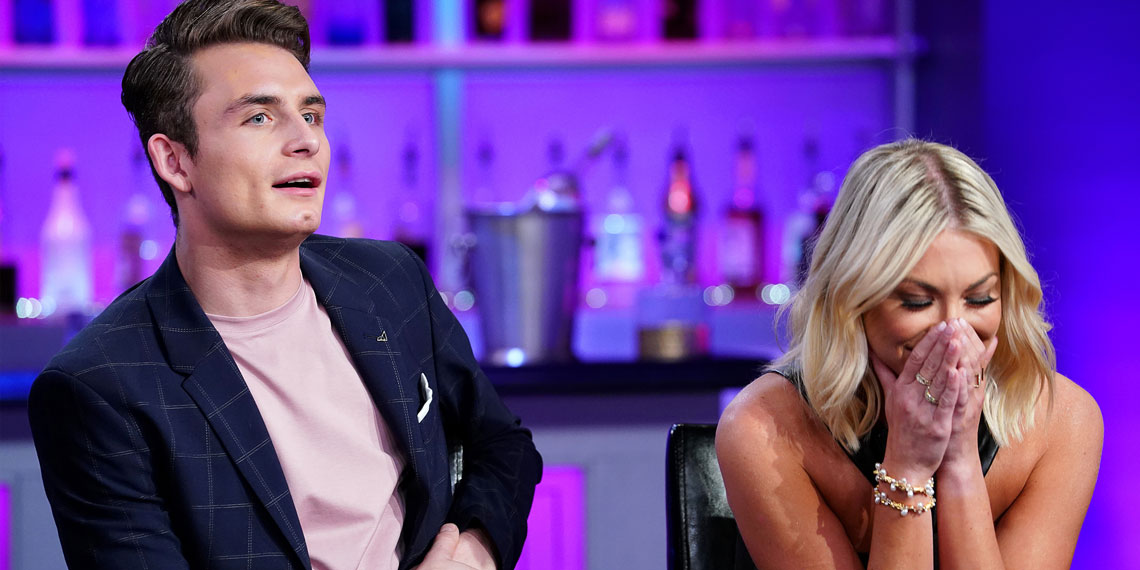 The Vanderpump Rules cast all moved to Los Angeles to earn their place on the Hollywood Walk of Fame. But instead, they got sidetracked by sex, drugs, and scandal, and now live every day like it’s a perpetual Walk of Shame. Happens. Put Lisa Vanderpump, the cast, and Andy Cohen in one room to dissect, decipher, and debate all of the crazy shit from this past season, and it never fails to entertain us. However, just because they are hashing out drama from this season doesn’t mean they don’t weaponize clandestine, depraved, and straight-up fucked up storylines from past seasons. Ever notice how a fight is never really about what happened during the fight, but it’s always secretly about something that happened six years ago? Exactly. This reunion is an echo chamber of insults, profanity, and debauchery for three straight episodes. However, there are some things on the reunions that even the shameless stars are too embarrassed to own up to. Let’s take a look at some of those skeletons in their closets.

You remember the Jonas Brothers. Okay, well, you remember Joe and Nick. Kevin? Not so much. And how could you forget? So many of their jams are the soundtrack to your preteen years. Our very own Scheana actually starred as the love interest in one of their lesser-known hits, “I Fell In Love With The Pizza Girl.” The concept is pretty self-explanatory: the Jonas brothers make heart emoji eyes at pre-nose job Scheana as she makes a pizza while channeling the charisma of a Las Vegas bottle service girl. Honestly, while the video is extremely embarrassing, we emphasize with the Jonas Brothers here. We’d fall for anyone that made us pizza too.

Let’s be real here: pretty much no one in the cast takes following their dreams that seriously. Well, dreams that are respectable. DJing doesn’t really count as a career, since it’s basically being a human iPod. Sorry, James. The exception to the rule? Ariana Madix. She takes sketch comedy very seriously. So seriously that she doesn’t like it when people even dabble in it. But I don’t know how seriously you can really take sketch comedy if you only have several College Humor sketches like “Guys With Crappy Cars Must Have Huge Dongs” under your belt. Does she consider that time she was named College Humor’s Cute College Girl of the Week a noteworthy accomplishment on her comedy curriculum vitae as well? Because her attempts at modeling definitely come off as comedy, if the look she’s going for is satirizing a surbuban mom trying to spice up her marriage by taking sexy pics for her husband after having a couple of glasses of room temperature Pinot Grigio with ice in it.

Tom Sandoval Was In A Bon Jovi Music Video

Remember a couple seasons back when we had to endure Tom’s god-awful music video “Just the T.I.P.” with the electric guitar decorated with dildos and Ariana grinding up on him? Turns out that that’s the second-worst video he has ever been in. Years back, he was in a Bon Jovi music video called “Misunderstood.” It’s about a guy who gets caught cheating on his girlfriend and is so hell-bent on denying it that he comes up with all these crazy excuses even though it’s so obvious that he cheated on her. Kind of like Shaggy, I guess. Life really does imitate art, because that’s exactly what happened with Sandoval, Ariana, and that Miami chick in season 3! At least Sandoval accomplished one major thing: he managed to have worse hair than Bon Jovi in that music video. What’s up with the wannabe Michael Kelso hair?

Of course the two greatest shows of all time that are about SoCal had to collide at some point. Unfortunately, Jax guest starred on an episode in season four, which is by far the weakest season of The O.C. It was a blink-and-you’ll-miss-him cameo, but he played one of the male escorts that Julie Cooper-Nichol-Nearly Cooper-Almost Roberts-Potentially Attwood hired for her New Years’ party that was supposed to promote her…um…dating service. It wouldn’t shock us if Julie ended up hooking up with Jax after the party, though, right? Can you be a match made in heaven if you both happen to be the devil incarnate?

Stassi is the mascot for basic bitches everywhere, and she’s proud of it. But high school was a completely different story. As it turns out, Stassi had a full-on goth phase. Not Avril Lavigne goth lite. We’re talking so goth she put that chick from Evanescence to shame. Then, daddy dearest bought her a chin implant as a high school graduation gift, and she went blonde and discovered fake tanning. If you think about it, this actually makes total sense. She’s obsessed with serial killers and zombies—she even had a murder themed birthday party. So while Stassi is now an anthropomorphic Barbie doll, she will always have the soul of Hannibal Lecter. Maybe she should’ve stayed goth, though, because then she would have a shot at bagging Elon Musk like Grimes did.

If we know anything, it’s that Jax will do anything for sex, money, or attention, as long as he doesn’t get burned in the process. But are we really surprised that he would be so despicable that he would model for brochures for Scientology, a  religion (don’t sue me pls) that has reportedly ruined countless lives, just for his modeling portfolio? Uh, no. We’re only shocked that he didn’t end up joining Scientology, because honestly, Jax is malleable and vacuous enough to join an alien-worshipping cult. Stassi even said on her podcasts that when they were dating, they went to a few Scientology classes together. But I feel like Stassi would really only go to hate-watch them because she’s so into things like aliens, serial killers, and zombies. Still, one wrong choice and we could have known Jax from Going Clear. It’s an interesting thought.

Anyone who’s talked to anyone who took Bio 101 knows that many students who start out on the premed track in college do not end up completing it. Tom Schwartz is one of those students who stuck it out, yet he couldn’t stick out one shift at Pump because he got anxious about not knowing how to punch in his drink orders. Sure, he should be in charge of people’s lives. Schwartz apparently abandoned his pursuit of med school because he was really passionate about acting. I mean, giving up the opportunity to have one of the most esteemed careers in the world to have your IMDB consist of a second-rate reality show and that one time you guest starred on Two and a Half Men may seem like an idiotic move. But then again, do you really wanna be in a dire situation where Tom Schwartz has your life in his hands?

In the early 2000’s, everyone slept with John Mayer. And if you weren’t of legal age to sleep with John Mayer, you were hooking up with John Mayer playing in the background on the couch of your high school boyfriend’s basement. But the thing about hooking up with John Mayer back then is that no one was supposed to talk about it. He was a bit of an unlovable manwhore, and it was embarrassing to have slept with him. But you know who wasn’t too embarrassed to talk about how she was “dating” (LOL, sure Jan) John Mayer? Scheana Marie. She offered up a cringeworthy interview to some no-name entertainment news show about her tryst with the playboy. He obviously stopped talking to her immediately after. But hey, coming off as more attention-seeking and icky than early 2000’s John Mayer is kind of a feat that not many mortals can accomplish. But one question we have to ask her about him: can John Mayer can put a television up on a wall in under seven minutes?