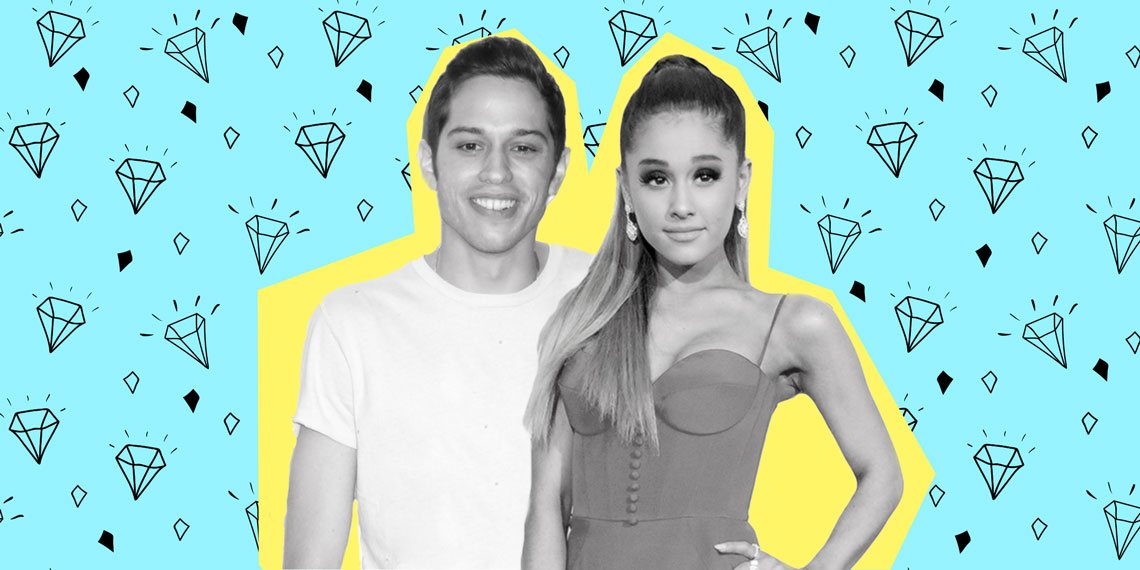 7 Celebrity Couples Who Barely Knew Each Other Before Getting Engaged

So we guess Ariana Grande and Pete Davidson read our article about how they’re pretty strange as a couple, but kind of work well together. (Come on, Ariana Grande is definitely the kind of girl who Googles herself.) Anyway, it sounds like they took that article to heart and decided to get engaged. Um…okay. But before you judge them, check out some couples that dated for only a hot minute before getting engaged. Sure, almost none of their marriages lasted. But still, at least they got some (short-lived) marital bliss!

Khloé Kardashian and NBA basketball players go together like Adderall and double vodka Red Bulls. Sure, it’s a euphoric buzz at first, but that buzz will eventually devolve into some fucked up shit. Khloé and Lamar knew each other for 30 days before they got married. And you know what? They were actually really sweet together—until he started cheating on her all the time and developed a horrific drug addiction. The four year relationship lasted longer than we thought it would. Khloé is easily the most likable Kardashian and the one we root for the most, so it broke our hearts a little to see her get screwed over, but at least we never have to hear her talk in that cringeworthy baby voice to “Lam Lam” ever again.

Mariah Carey is the ultimate diva, and while we may worship her for that, I’d imagine that it’s got to be kind of hard to put up with that as a husband. So we gotta hand it to Nick Cannon for giving marriage to Mariah Carey a shot. He seriously said they listen to her music while they had sex. Usually I want to inject crazy celebrity sex myths into my veins, but even that was a bit difficult to stomach. But did you know they were only dating for six weeks before they got engaged? That’s kind of a short time to get to know someone and get a sense of how difficult and high-maintenance they can truly be. So maybe that explains why he married her to begin with.

Katy Perry has a history of doomed relationships. She dated playboy John Mayer on and off for a couple of years. And honestly, in spite of his sketchy history (remember when he dated Scheana from Vanderpump Rules?) we understood. Have you heard his music? You have two ears and a heart, don’t you? Then she moved on to Riff Raff and Diplo, who both look like what you would find at the bottom of your shoe after a bender at Electric Daisy Carnival. But Russell Brand was the man who lead the revolving door of fuckboys that come in and out of Katy’s life. Russell Brand. He’s a comedian (red flag because of their emotional issues), admitted sex addict (red flag because emotional AND commitment), and spokesman for PETA (red flag because, again, emotional issues). After dating for two months, the couple went on to have an over-the-top wedding in India. We all know that how expensive the wedding is is directly proportional to how expensive the divorce will be. Russell reportedly ended his 14 month marriage to Katy over—get this—a text message. So wait, the guy shits on people who eat steak and Chick-fil-A because it’s heartless, but ends his marriage via text? Okay then. He actually said a while back that he wants to be friends with Katy again. LOL sure.

4. That Tennis Player And Kaley Cuoco

Kaley Cuoco, star of The Big Bang Theory, married Ryan Sweeting, that tennis player who you don’t care about, after three months of dating. They ended up getting married on New Year’s Eve, which in and of itself is a red flag. Not because all holiday marriages are doomed for divorce, but because the only thing tackier than a holiday marriage proposal is a holiday wedding. They actually lasted for two years. Getting divorced so publicly sucks, but being on a show as terrible as The Big Bang Theory is still a much more embarrassing burden to bear in spite of the million dollar paycheck.

Britney Spears has done some pretty shocking things in her career. How can we forget when she made out with Madonna or performed with an actual snake at the VMAs? Well, when she ended up making out with human snake Kevin Federline, that’s when we threw our hands up and stopped believing in Britney. I mean, he had a pregnant baby mama when he started up with Britney. They dated for only a couple of months before getting engaged. The day of their wedding, the bride and groom parties had their own Juicy Coutoure sweatsuits. The ladies wore pink tracksuits with “The maids” bejeweled on their backs, while Brit had “The Bride” on hers. The gentlemen (and we use that term very loosely here) wore white tracksuits that said “Pimps” in black cursive. Literally the only sign worse than the groom having a pregnant baby mama when he first met the bride is wearing a tracksuit that says “Pimp” on it. We’re sure they served Mountain Dew cocktails and a buffet of McDonald’s at the reception. Still, Britney and Kevin lasted a surprisingly long time. Well, they lasted three years, but that’s still a surprisingly long time for them.

Emily Ratajkowski is one of the sexiest women in the world, according to any men’s magazine, any guy, and, well, anyone with a pulse, really. So it totally shocked us when she got hitched to Sebastian Bear-McClard. First off, she had just broken up with her long-term boyfriend approximately five seconds prior and only knew Sebastian for several weeks. Second of all, he proposed to her at a restaurant with a makeshift ring made out of a paper clip. And lastly, they got married at city hall with the Fat Jewish as their witness. You know it’s a bad sign when your husband’s best friend’s job is highjacking memes and writing captions in caps lock. Sebastian is kind of cute because he’s like Landry from Friday Night Lights, if Landry was a first-string quarterback who never got friend zoned by Tyra instead of a nerdy benchwarmer. But still, they deprived us of the fairy tale wedding that Emily deserved. Who the hell wears a mustard suit instead of Vera Wang?